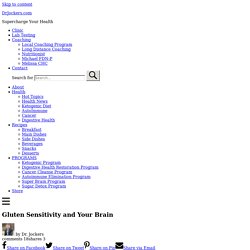 Gluten is a sticky storage protein that binds to the small intestinal wall where it often causes digestive and immune system disorders. Gluten sensitivity is an epidemic that is a major factor in inflammatory disorders of the gut, immune system, skin and nervous system. Gluten intolerance is highly associated with inflammatory disorders of all kinds (1). It is also a contributing factor in many autoimmune diseases such as celiac disease, rheumatoid arthritis, type I diabetes, neurological disorders, Hashimoto’s thyroiditis, autoimmune cardiomyopathy, lymphoma, and dermatitis herpetiformis (skin disease) among others (2,3,4,5).

Gluten and Mood Disorders. Gluten and Migraine Headaches. Gluten and Schizophrenia. Gluten and the Brain Series | Drs. Parker and Osborne. Gluten and the Blood Brain Barrier. Gluten-Free Diet effective in Tourettes – Rosemary Cottage Clinic Blog. I’ve not been writing about gluten and gluten-free diets for a while, but that’s not because I’ve realised it was all a silly mistake and gone back to eating bread. 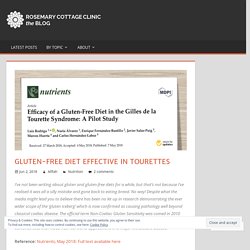 No way! Despite what the media might lead you to believe there has been no let up in research demonstrating the ever wider scope of the ‘gluten iceberg’ which is now confirmed as causing pathology well beyond classical coeliac disease. The official term Non-Coeliac Gluten Sensitivity was coined in 2010 (NCGS) in an attempt to grapple with the burgeoning research in this field. This new paper demonstrates that NCGS has real world applications in a major intractable disease.

Reference: Nutrients, May 2018: Full text available here Tourette syndrome is a neurological disorder characterised by repetitive involuntary movements or speech known as tics. The condition is very difficult to live with leading to a significant reduction in quality of life. NIH Tourette Syndrome Fact Sheet What the researchers had to say about NCGS. New study shows gluten and dairy cause brain autoimmunity.

A new study shows a significant portion of the US population not only reacts to gluten and dairy but also that this reaction causes the immune system to destroy brain and nervous tissue in a scenario called neurological autoimmunity (as evidenced by positive tissue antibodies). 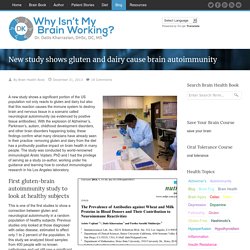 With the explosion of Alzheimer’s, Parkinson’s, autism, childhood development disorders, and other brain disorders happening today, these findings confirm what many clinicians have already seen in their practice: removing gluten and dairy from the diet has a profoundly positive impact on brain health in many people. The study was conducted by world-renowned immunologist Aristo Vojdani, PhD and I had the privilege of serving as a study co-author, working under his guidance and learning how to conduct immunological research in his Los Angeles laboratory. First gluten-brain autoimmunity study to look at healthy subjects Mistaken identity, or molecular mimicry, behind brain attacks. The Gluten Doctors: Dementia is Skyrocketing - Does Gluten Intolerance Play a Role?

According to the World Health Organization, cases of dementia are set to soar in the coming decades. 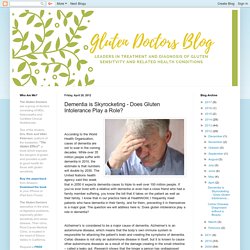 While over 35 million people suffer with dementia in 2010, the estimate is that numbers will double by 2030. The United Nations health agency said this week that in 2050 it expects dementia cases to triple to well over 100 million people. If you’ve ever lived with a relative with dementia or even had a close friend who had a family member suffering, you know the toll that it takes on the patient as well as their family. I know that in our practice here at HealthNOW, I frequently meet patients who have dementia in their family, and for them, preventing it in themselves is a major goal.

The question we will address here is: Does gluten intolerance play a role in dementia? Alzheimer’s is considered to be a major cause of dementia. Here at HealthNOW we find both patients with celiac disease and gluten sensitivity at risk for autoimmune disease. I look forward to hearing from you. Can Gluten Cause Dementia? Gluten Intolerance & Autism - Is There a Connection? The Gluten Doctors: Brain Changes in Autism caused by Gluten? Gluten affects the brain and the nervous system. 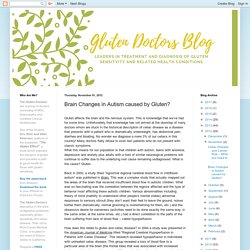 This is knowledge that we’ve had for some time. Unfortunately that knowledge has not arrived at the doorstep of many doctors whom are stuck in the historical description of celiac disease as a disease that presents with a patient who is dramatically underweight, has abdominal pain, diarrhea and bloating. No wonder we diagnose a mere 3% of our celiacs in this country! Many doctors flatly refuse to even test patients who do not present with classic symptoms. What this means for our population is that children with autism, teens with anorexia, depression and anxiety plus adults with a host of similar neurological problems will continue to suffer due to the underlying root cause remaining undiagnosed. Back in 2000, a study titled “Agnormal regional cerebral blood flow in childhood autism” was published in Brain. How does this relate to gluten and celiac disease? I’d like to hear what you think.

I look forward to hearing from you. References: Gluten Sensitivity, Food Allergies & The Gut-Brain Connection.