General Diet and the Brain 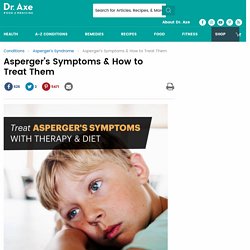 But did you know that an estimated 31 million people around the world deal with Asperger’s symptoms — a number that some experts believe may even be higher (like 68 million)? (1) This developmental disorder can make it difficult for people — particularly children — to interact with others, as social skills are delayed. Now, that doesn’t mean that just because someone is socially awkward he or she has Asperger’s syndrome, but you should know the signs and symptoms of Asperger’s. So let’s take a look at what Asperger’s syndrome entails and identify the Asperger’s symptoms you should look out for. What Is Asperger’s Syndrome? There are a number of therapy programs that are in place for individuals with Asperger’s symptoms, including cognitive behavioral therapy and group therapy sessions. Dr. What Do Dementia and Autism Have in Common? 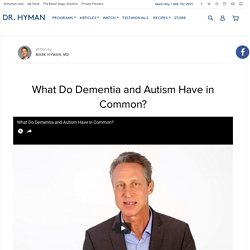 They tell us what disease we have, but they don’t say why we have it or even more importantly, how we can really treat it – other than prescribing a pill for every ill. The emphasis on naming diseases is pervasive throughout medicine, and it is the single biggest obstacle to changing the way we do things and finding the answers to our health problems. The truth is that two brain disorders, with two completely different names, might have a lot more in common than you might think. To explain this, let me tell you about two of my patients, Sam and Christine. Sam was diagnosed with autism at 22 months. His amino acids, which are necessary for normal brain function and detoxification, were also depleted, and his body showed high levels of heavy metals including aluminum, lead, and arsenic.

After almost a year of treating these issues and working closely with Sam, we saw remarkable improvements. MIND diet may slow cognitive decline in stroke survivors. Brain Fatigue: Fundamental Solutions. Fish Oil Component Boosts Damaged Brain, Retinal Cells. Research reveals for the first time that NDP1 triggers the production of a protective protein against toxic free radicals and injury in the brain and retina. 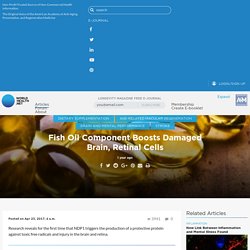 Researchers at Louisiana State University have determined that fish oil boosts damaged brain cells as well as damaged retinal cells. The study was spearheaded by Nicolas Bazan, the Director of LSU's Health New Orleans School of Medicine's Neuroscience Center of Excellence. The research was performed in a model of human retinal pigment epithelial cells and ischemic stroke. About NPD1 NPD1 is an acronym that stands for neuroprotectin D1. The Findings This study is considered a breakthrough as it provides the first evidence that NDP1, a signaling molecule, prompts the creation of a protective protein against harmful free radicals as well as brain cell and retinal cell injury.

The findings are important as they show that NPD1 created in an on-demand manner, modulates the amount of Iduna protein necessary for cell survival. Heavy Metal: Lead and the Brain. Source: wikimedia commons The recent news covering the terrible exposure of thousands of children to toxic levels of lead from the contaminated water supply in Flint, Michigan has led to outrage in the populace and turnover of government officials charged with protecting our health from known poisons. 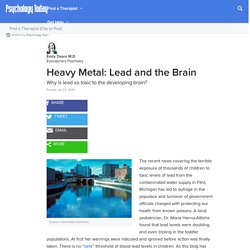 A local pediatrician, Dr. Mona Hanna-Attisha found that lead levels were doubling and even tripling in the toddler populations. At first her warnings were ridiculed and ignored before action was finally taken. There is no “safe (link is external)” threshold of blood lead levels in children. Interest in the toxic effects of lead on the nervous system in the modern age began in the mid-20th century, when it became clear that exposure to leaded paint and perhaps emissions from leaded gasoline seemed to cause both subtle and devastating neurological problems, from lower IQ, attentional and behavioral problems to severe encephalopathy and death.