Scientists Sign Petition Warning about EMF. Headlines range from: “Are AirPods and Other Bluetooth Headphones Safe?” 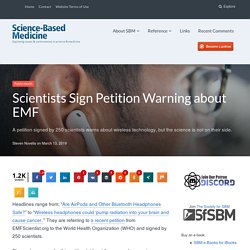 To “Wireless headphones could ‘pump radiation into your brain and cause cancer.’” They are referring to a recent petition from EMFScientist.org to the World Health Organization (WHO) and signed by 250 scientists. The spokesperson for this petition (at least the person I am seeing as most quoted) is Jerry Philips who is on the scientific advisory board for a group called Physicians for Safe Technology. The petition warns about the health risks for non-ionizing radiation from wireless devices, that current regulations and research are inadequate, and makes the following requests:

Do You Need to Protect Yourself against EMF Dangers? EMFs. Electromagnetic Radiation Dangers Confirmed by Neuroscientist (And How to Protect Yourself) Our Wireless World. Is it healthy? Marathon Drugs Increases Price 70-Fold – 2/10/17 More predation by pharma. 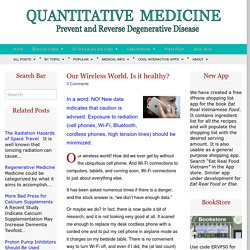 Marathon has gotten a decades old muscular dystrophy drug, deflazacort, approved and is charging $89,000 a year for it. It’s price in Europe is under $1500/year. Where are the free market forces? Why aren’t our elected officials protecting us from this egregious practice? Lowest Stroke Rates in Older Baby Boomers; Younger People Rising– 9/12/16 reports the American Heart Association, here. Sugar Lobby Promotes Sugar– 11/13/16 Surreal.

Zika Breakthrough– 8/30/16 Reported here and elsewhere, two existing (already approved) drugs appear to be effective against Zika. AHA Limits Added Sugar– 8/17/16 A sensible recommendation from the American Heart Association limits sugar for children aged 2-18 to fewer than 6 teaspoons a day. Calcium Supplements Linked to Dementia– 8/17/16 A report in the journal Neurology, here, links calcium supplements to dementia in some groups of women. Are EMFs Dangerous? Unbiased Science-Based Review of Electromagnetic Fields. Increased and continued exposure to EMFs increase the chance of cancer. 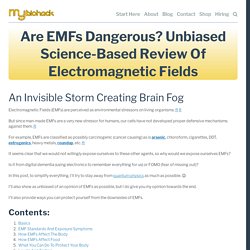 R R This is because EMFs change the antioxidant status in cells (mainly via NRF2) and also cause (within minutes) the body to express heat-shock proteins and genes at a much higher rate than normal heat would. R R This change in oxidation status to the cells can even happen with non-thermal radiation. R This induces DNA damage, improper cell death, and cancer. For example, MRIs may increase the risk of developing breast cancer. There are several conflicting studies possibly linking childhood leukemia and exposure of EMFs by living near power lines.

EMF Advice. Beyond Toxic Chemicals are EMF's (Electromagnetic Fields) I never thought it would happen to me, but it did. 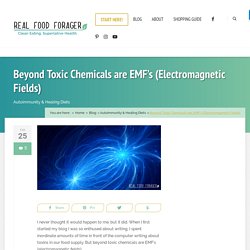 When I first started my blog I was so enthused about writing, I spent inordinate amounts of time in front of the computer writing about toxins in our food supply. But beyond toxic chemicals are EMF’s (electromagnetic fields). I began to feel nauseous by 10:00 at night. It turned out to be sensitivity to the EMF given off by the computer. At first I thought it was the fluorescent light above the computer so I changed the bulb. I also ruled out eye strain. Why Sleeping in the Woods for 11 Days Improved My Mental Health. In a few of those studies, researchers found a specific correlation between living near a cellphone base station and severity of depressive symptoms (38-40). 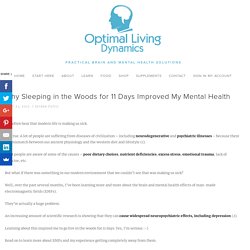 In another study, researchers looked at personnel at the U.S. embassy in Moscow who were exposed to EMFs, and they found that there was a statistically significant increase in depression (41). People working around radiofrequency EMFs are also more likely to suffer from depression and commit suicide (42-45). A good way to combat this is by supplementing with rhodiola. I previously wrote about how it’s a good antidepressant, but it’s been shown to be radioprotective as well (60-62). 14.

EMFs and Cell Phones. EMFs: What to Do? EMF Sensitivity and CFS/ME. Measuring EMF. Fitbit Recall: Reports of EMF-related Symptoms like Dizziness and Headaches. More experts blame EMF radiation for chronic disease. With the advance of 5G wireless technology and smart meters being fitted to many houses worldwide, healthcare professionals such as Dietrich Klinghardt, MD, Phd are becoming more and more concerned about the threat that EMF pollution is posing. 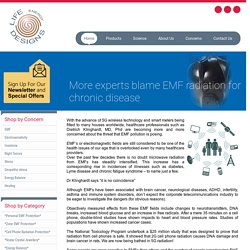 EMF’s or electromagnetic fields are still considered to be one of the health issues of our age that is overlooked even by many healthcare providers. Over the past few decades there is no doubt microwave radiation from EMFs has steadily intensified. This increase has a corresponding rise in incidences of illnesses such as diabetes, Lyme disease and chronic fatigue syndrome – to name just a few. 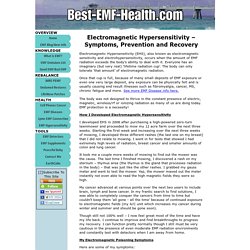 Everyone has an imaginary (but very real) ‘lifetime radiation cup’. The body can only tolerate ‘that amount’ of electromagnetic radiation. Once that cup is full, because of many small deposits of EMF exposure or even one very large deposit, any exposure can be physically felt and is usually causing end result illnesses such as fibromyalgia, cancer, MS, chronic fatigue and more. See more EMF Disease info here. The body was not designed to thrive in the constant presence of electric, magnetic, wireless/rf or ionizing radiation as many of us are dong today. How I Developed Electromagnetic Hypersensitivity I developed EHS in 2008 after purchasing a high-powered zero-turn lawnmower and proceeded to mow my 12 acre farm over the next three weeks. My Electromagnetic Poisoning Symptoms In Summary.