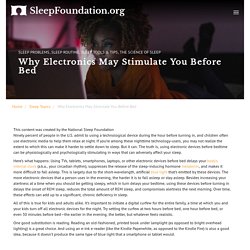 This is largely due to the short-wavelength, artificial blue light that’s emitted by these devices. All of this is true for kids and adults alike. One good substitution is reading. Light, Sleep & School-Aged Children: A Complex Relationship - National Sleep Foundation. Light is one of the most powerful signals in our environment—regulating the brain’s internal clock and affecting our sleep patterns, health, mood and more. 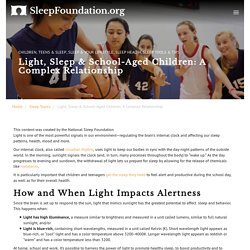 Our internal clock, also called circadian rhythm, uses light to keep our bodies in sync with the day-night patterns of the outside world. In the morning, sunlight signals the clock (and, in turn, many processes throughout the body) to “wake up.” As the day progresses to evening and sundown, the withdrawal of light lets us prepare for sleep by allowing for the release of chemicals like melatonin. It is particularly important that children and teenagers get the sleep they need to feel alert and productive during the school day, as well as for their overall health.

The Sneaky Ways That Blue Light Can Interfere With Your Kids’ Sleep. As difficult as it is to get kids to stop watching TV or using their electronic devices before bedtime, there’s a compelling reason to make it happen. 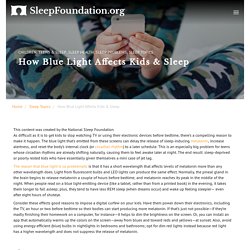 The blue light that’s emitted from these screens can delay the release of sleep-inducing melatonin, increase alertness, and reset the body’s internal clock (or circadian rhythm) to a later schedule. This is an especially big problem for teens whose circadian rhythms are already shifting naturally, causing them to feel awake later at night. The end result: sleep-deprived or poorly rested kids who have essentially given themselves a mini case of jet lag. The reason that blue light is so problematic is that it has a short wavelength that affects levels of melatonin more than any other wavelength does. How does blue light affect sleep? - ActiveSG. Effect of a blue-light-blocking intraocular lens on the quality of sleep. AMBER LENSES TO BLOCK BLUE LIGHT AND IMPROVE SLEEP: A RANDOMIZED TRIAL: Chronobiology International: Vol 26, No 8. All light is not equal: blue wavelengths are the most potent portion of the visible electromagnetic spectrum for circadian regulation. 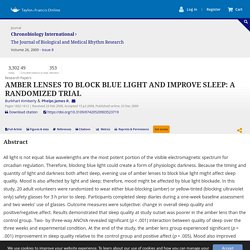 Therefore, blocking blue light could create a form of physiologic darkness. How Technology Impacts Sleep Quality. Our cell phones, tablets, computers and other electronic gadgets have become such a huge part of our daily lives that it’s often hard to put them down—even at bedtime. 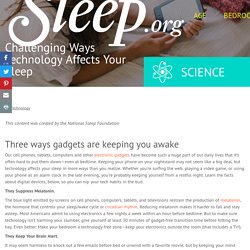 Keeping your phone on your nightstand may not seem like a big deal, but technology affects your sleep in more ways than you realize. Whether you're surfing the web, playing a video game, or using your phone as an alarm clock in the late evening, you're probably keeping yourself from a restful night. Learn the facts about digital devices, below, so you can nip your tech habits in the bud. They Suppress Melatonin. The blue light emitted by screens on cell phones, computers, tablets, and televisions restrain the production of melatonin, the hormone that controls your sleep/wake cycle or circadian rhythm. They Keep Your Brain Alert. They Wake You Up. Technology & Sleep. How can technology use affect us at bedtime? 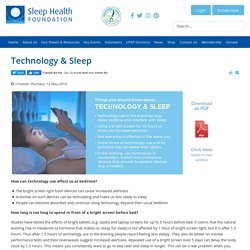 The bright screen light from devices can cause increased alertnessActivities on such devices can be stimulating and make us less ready to sleepPeople can become absorbed and continue using technology beyond their usual bedtime How long is too long to spend in front of a bright screen before bed? Studies have tested the effects of bright tablets (e.g. ipads) and laptop screens for up to 5 hours before bed. It seems that the natural evening rise in melatonin (a hormone that makes us ready for sleep) is not affected by 1 hour of bright screen light, but it is after 1.5 hours.

Thus after 1.5 hours of technology use in the evening people report feeling less sleepy. TechnologyandSleep 0416. Is Your Smartphone Ruining Your Sleep? State of Sleep™: Updates on Sleep & Public Policy Smartphones make it easier than ever to be connected to the Internet at every waking moment. 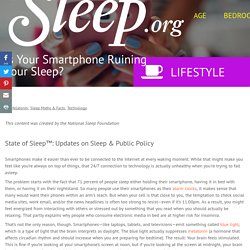 Difficulty sleeping: Why darkness matters - ResSleep. When it’s been a long day of work, the last thing you want when you go to bed is to find a strip of light sneaking through the curtains, falling on your face. 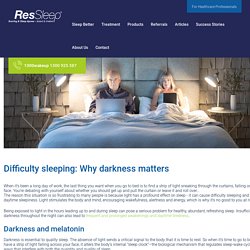 You’re debating with yourself about whether you should get up and pull the curtain or leave it and roll over…The reason this situation is so frustrating to many people is because light has a profound effect on sleep - it can cause difficulty sleeping and leak into daytime sleepiness. Light stimulates the body and mind, encouraging wakefulness, alertness and energy, which is why it’s no good to you at night. Being exposed to light in the hours leading up to and during sleep can pose a serious problem for healthy, abundant, refreshing sleep.

Technology’s effect on your sleeping habits - ResSleep. At the end of every working day, once you’ve spent time with family, it’s normal to steal a bit of time for yourself. 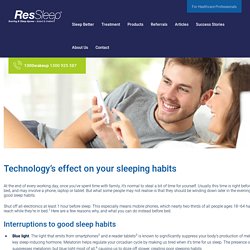 Usually this time is right before bed, or in bed, and may involve a phone, laptop or tablet. But what some people may not realise is that they should be winding down later in the evening to create good sleep habits. Shut off all electronics at least 1 hour before sleep. This especially means mobile phones, which nearly two-thirds of all people ages 18–64 have within reach while they’re in bed.1 Here are a few reasons why, and what you can do instead before bed.

(5) How Smartphones Affect Your Sleep. How Technology Impacts Sleep Quality.