CFS/ME and the Mitochondria

Mitochondria are small organelles (just like organs in the body) that produce energy for the cells in your body. Their function impacts everything in the body. 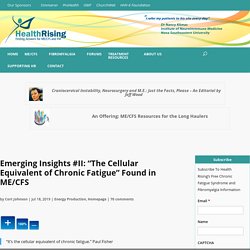 Paul Fisher One of the really nice things about the Emerge conference was the nice, big chunks of time they gave to some of their presenters. Paul Fisher, an Australian specialist in neurodegenerative diseases and the mitochondria, used that time to his advantage: he gave one of the most interesting chronic fatigue syndrome (ME/CFS) presentations I’ve seen in years. Fisher said he’s been knocking on ME/CFS’s door, trying to get in for over ten years. Only recently did he get his opportunity – and he’s made the best of it. Fisher, well-published and funded for work into Parkinson’s disease by the Michael J. A Little Crisis – A Little Rant Which brings up my underground legitimacy crisis – the fact that I’m still somewhat shocked when someone like Fisher is interested in studying this disease.

I’m acting like someone who’s been beaten on a regular basis for twenty years. I declare that that’s over for me, though. We’re not a burden. Results. The Myhill Mitochondrial Test and ME/CFS Studies Take a Hit. The ATP Profiles test developed by Dr John McLaren-Howard (and the Mitochondrial Energy Score developed from it) has been a big deal for the chronic fatigue syndrome (ME/CFS) community. 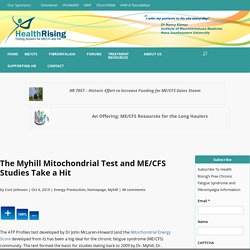 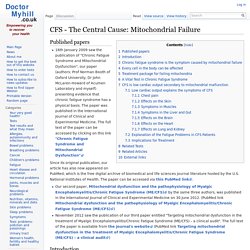 CFS is not a Mitochondrial dysfunction. There have been some recent articles and a nice summary from a presentation given (before the articles was published). 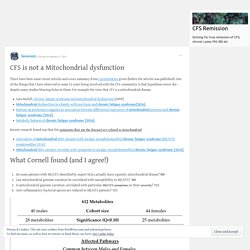 One of the things that I have observed in some 15 years being involved with the CFS community is that hypothesis never die– despite many studies blowing holes in them. For example the view that CFS is a mitochondrial disease. Recent research found was that the symptoms (but not the disease) are related to mitochondrial. Trying to Understand the Origin of ME/CFS. By John Bochenek ME/CFS has been around for decades, perhaps much longer under other names such as neurasthenia. 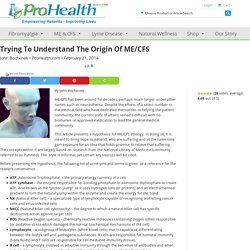 Despite the efforts of a select number in the medical field who have dedicated themselves to helping the patient community, the current state of affairs remains difficult with no biomarker or approved medication to lead the general medical community. This article presents a hypothesis for ME/CFS etiology. In doing so, it is meant to bring hope to patients who are suffering and at the same time gain exposure for an idea that holds promise to relieve that suffering. The concepts within it are largely based on research from the National Library of Medicine (commonly referred to as Pubmed). Lactic Acidosis Prevention & Natural Recovery Tips.

By Katherine Brind’Amour, PhD Lactic acidosis happens when there is too much lactate in your blood. 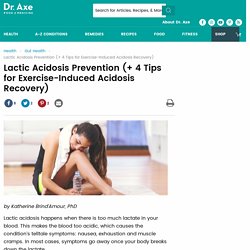 This makes the blood too acidic, which causes the condition’s telltale symptoms: nausea, exhaustion and muscle cramps. In most cases, symptoms go away once your body breaks down the lactate. Lactic acidosis is most often caused by intense exercise. (1) However, people with other health problems or those who take certain medications can also develop the condition. Left untreated, lactic acidosis can increase the risk of death. (2) Thankfully, most cases are easily treated and can be prevented. (3) Follow the advice below to avoid lactic acidosis or help your body recover. What Is Lactic Acidosis? Normally, oxygen in your blood breaks down glucose (sugar) to turn it into energy. Is lactic acidosis dangerous? 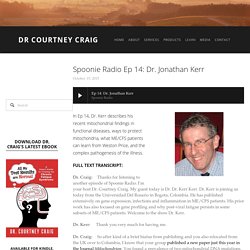 Kerr: This is the idea of Richard Boles who works at UCLA and we have a nice picture there of an elephant. Basically it's supposed to be a metaphor basically a very large animal with different diseases affecting different parts of the body and being attended to by different doctors who don't talk to each other. Why Mitochondria Are The Key To How To Overcome Fatigue (And How To Increase Mitochondria) with Dr. Lee Know - The Energy Blueprint. Mitochondria And Fatigue: The Real Cause of Fatigue with Dr. Sarah Myhill - The Energy Blueprint. The Extracellular Matrix - A Secret Key to Health and Energy with Michael McEvoy. Mitochondrial DNA variants correlate with symptoms in myalgic encephalomyelitis/chronic fatigue syndrome. - PubMed - NCBI. Could mitochondrial dysfunction be a differentiating marker between chronic fatigue syndrome and fibromyalgia? - PubMed - NCBI. 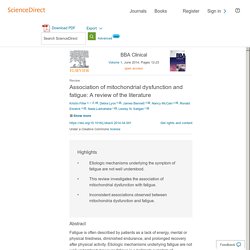 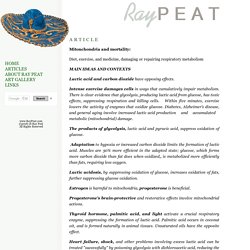 Intense exercise damages cells in ways that cumulatively impair metabolism. There is clear evidence that glycolysis, producing lactic acid from glucose, has toxic effects, suppressing respiration and killing cells. Within five minutes, exercise lowers the activity of enzymes that oxidize glucose. Natural-progesterone-advisory-network. In the context of metabolic health, hormone balancing is a vital component. 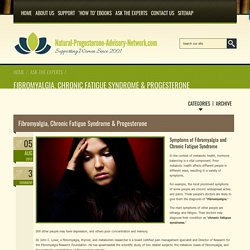 Poor metabolic health affects different people in different ways, resulting in a variety of symptoms. For example, the most prominent symptoms of some people are chronic widespread aches and pains. These people’s doctors are likely to give them the diagnosis of “fibromyalgia.