Probiotics are not always good for you

Probiotics, revisited. We are not one organism, we are many organisms. 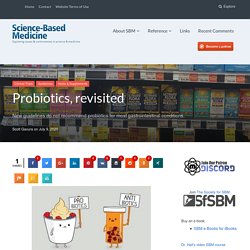 There is continued scientific interest in studying how our bodies interact with the organisms that we carry, on and in us. Probiotics, which are live bacteria given to treat or prevent illness, have been a subject of blog posts back to SBM’s early years. They’re an interesting subject, with scientific plausibility (and some real science) but layered with lots of myth and pseudoscience.

The interaction between our gastrointestinal microbes and our own body can affect our wellbeing as well as illnesses like inflammatory bowel disease, Crohn’s disease, and ulcerative colitis. We can look to the evolving evidence for fecal transplantation as an illustration of how our microbiome matters. New practice guidelines The American Gastroenterology Association (AGA) is the professional organization that represents gastroenterologists. The Probiotic Paradox: When Probiotics Fail or Even Do Harm - an ME/CFS Perspective. Our guts are teeming, just teeming, with bacteria that provide many useful functions. 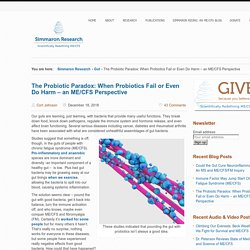 They break down food, knock down pathogens, regulate the immune system and hormone release, and even affect brain functioning. Several serious diseases including cancer, diabetes and rheumatoid arthritis have been associated with what are considered unhealthful assemblages of gut bacteria. These studies indicated that pounding the gut with probiotics isn’t always a good idea. 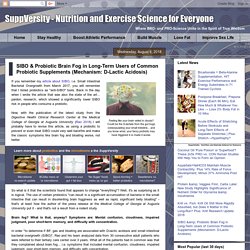 Small Intestinal Bacterial Overgrowth from March 2017, you will remember that I listed probiotics as "anti-SIBO" tools. Back in the day when I wrote the article that was also the state of the art... pardon, research, which showed a significantly lower SIBO risk in people who consume a probiotic. Now, with the publication of the latest study from the Digestive Health Clinical Research Center at the Medical College of Georgia at Augusta University (Rao 2018) I will probably have to revise this article, as using a probiotic to prevent or even treat SIBO could very well backfire and make the classic symptoms like brain fog and bloating worse, not better.

Personalized Gut Mucosal Colonization Resistance to Empiric Probiotics Is Associated with Unique Host and Microbiome Features: Cell. Post-Antibiotic Gut Mucosal Microbiome Reconstitution Is Impaired by Probiotics and Improved by Autologous FMT: Cell. Probiotics: A Guide For Those With Food Sensitivities. Probiotics Side Effects: Not Always Safe, May Even Kill You. As a compound of two Greek words, the “pro” means promotion and “biotic” means life. 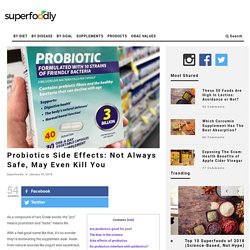 With a feel-good name like that, it’s no wonder they’re dominating the supplement aisle. Aside from natural sources like yogurt and sauerkraut, they’re even being added to foods like protein bars, tortilla chips, and even cookies. Such ubiquity may be a mistake. Are probiotics good for you? As a dietary supplement, probiotics are marketed for the prevention of gas and bloating, regular bowel movements, and the prevention of some intestinal disorders. For both women and men, it is true that these living microorganisms appear to offer health benefits for many. FlatulenceDiarrhea caused by infectionsAntibiotic-associated diarrheaIrritable bowel syndrome (IBS)Crohn’s diseaseUlcerative colitisStomach ulcers caused by H. pylori bacteriaUrinary tract infections (UTI)Vaginal infectionsTooth decayColectomy-induced inflammation (pouchitis)Common coldsEczema The bias in the science 1. 2.

Why You Should Think Twice Before Using Probiotics. Stop Bombarding Your Gut With Probiotics. Probiotics -seeds of change, or unnecessary chimpanzees? AKA What I say when people ask me about Yakult. 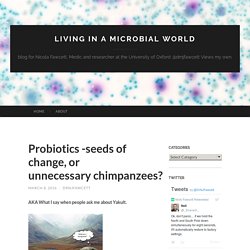 “Probiotics -what do you think of them?” I get asked this quite a lot, when I talk about antibiotics, gut bacteria, and our own microbial community, or ‘microbiome’, in general. So first up, let’s just say, I love Microbiomes. I think the whole area is fascinating, I’m lucky enough to work in the area, and I firmly believe a better understanding will transform how we see health, and how we treat our patients. I think…we’re not quite there yet. As I’ve heard it described many times, Microbiome science is generally still in the ‘cataloguing’ stage.

Why I am Split on Recommending Kefir, A Review. Most people in the health blogosphere focus on the positives of kefir; it is the bee’s knees! 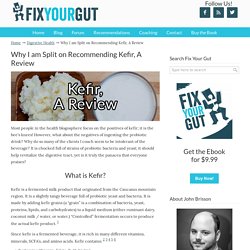 However, what about the negatives of ingesting the probiotic drink? Why do so many of the clients I coach seem to be intolerant of the beverage? It is chocked full of strains of probiotic bacteria and yeast; it should help revitalize the digestive tract, yet is it truly the panacea that everyone praises? What is Kefir? Kefir is a fermented milk product that originated from the Caucasus mountain region. Yogurt as a Probiotic, A Review. Yogurt is a “go to” probiotic for many people. 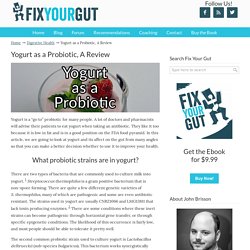 A lot of doctors and pharmacists will advise their patients to eat yogurt when taking an antibiotic. They like it too because it is low in fat and is in a good position on the FDA food pyramid. In this article, we are going to look at yogurt and its affect on the gut from many angles so that you can make a better decision whether to use it to improve your health. What probiotic strains are in yogurt? There are two types of bacteria that are commonly used to culture milk into yogurt. The second common probiotic strain used to culture yogurt is Lactobacillus delbrueckii (sub-species bulgaricus). There are often uncontrolled strains that appear in yogurt. Will the probiotics in yogurt survive the digestive process? This is a valid question. 11 Reasons To Avoid Yakult And Other Probiotic Drinks. 3 May 2016 - Updated with an offical response from Yakult at the bottom of the article.Note - To Download a FREE one page guide on the best Natural Probiotics CLICK HERE Yakult, Align, Probio 7, Bio-Kult, Activia... 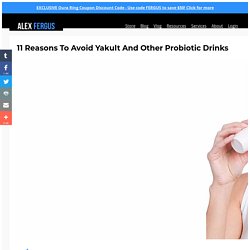 The chilled section at any supermarket is littered with these probiotic drinks. Many people down their morning shot of 'good bacteria' after hearing about the benefits of extra probiotics in the diet.