Riboflavin Has Neuroprotective Potential: Focus on Parkinson's Disease and Migraine. - PubMed - NCBI. Alternative Treatments for Parkinson's Disease. Dopamine. Singing improves Parkinson's symptoms and quality of life. Welcome to Medical News Today Healthline Media, Inc. would like to process and share personal data (e.g., mobile ad id) and data about your use of our site (e.g., content interests) with our third party partners (see a current list) using cookies and similar automatic collection tools in order to a) personalize content and/or offers on our site or other sites, b) communicate with you upon request, and/or c) for additional reasons upon notice and, when applicable, with your consent. 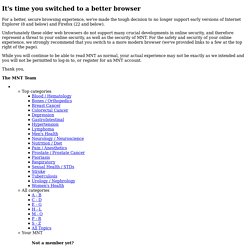 Healthline Media, Inc. is based in and operates this site from the United States. Any data you provide will be primarily stored and processed in the United States, pursuant to the laws of the United States, which may provide lesser privacy protections than European Economic Area countries. By clicking “accept” below, you acknowledge and grant your consent for these activities unless and until you withdraw your consent using our rights request form.

Learn more in our Privacy Policy. Infrared Therapy for Alzheimer's and Parkinson's. Parkinson's Disease Natural Treatment and Remedies in 5 Steps. Parkinson’s disease is a degenerative illness of the nervous system that results in loss of intentional movement and impaired motor functioning. 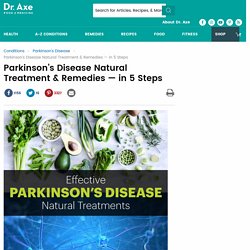 The Science of Parkinson's. Spot the unhealthy cell – exhibiting signs of stress (yellow). 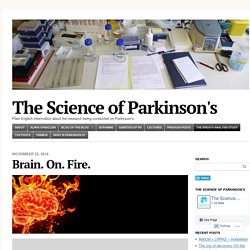 Source: Gettyimages No silly preamble today – this is going to be a very long post, so we’re diving straight in: When cells in your body are stressed or sick, they begin to release messenger proteins which inform the rest of your body that something is wrong. When enough cells release these messenger proteins, it can cause inflammation. What is inflammation? Inflammation is a vital part of the immune system’s response to trouble. By releasing the messenger proteins, injured/sick cells kick off a process that results in multiple types of immune cells entering the troubled area of the body and undertaking very specific tasks. The inflammatory process. The strength of the immune response depends on the volume of the signal arising from those released messenger proteins. 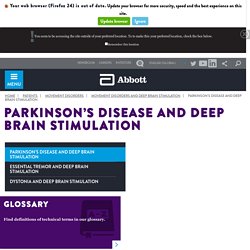 Approximately seven to 10 million people around the world live with PD.1 Risk factors for PD include age, some environmental causes, head injury and genetics. Causes and symptoms of Parkinson’s Disease PD is known to affect an area of the brain called the basal ganglia. The basal ganglia regulate movement by controlling a balance of chemical and electrical signals between itself and other areas of the brain. When the basal ganglia function improperly, symptoms such as tremor can occur, making everyday activities more difficult.

Deep brain stimulation linked to longer survival for Parkinson's patients. Update – Mannitol and Parkinson’s disease. Over the two weeks we have had a lot of interest in our post regarding the sweetener, Mannitol and preclinical studies suggesting that it prevents the clustering/aggregation of the Parkinson’s disease associated protein, alpha synuclein (Click here to read that post). 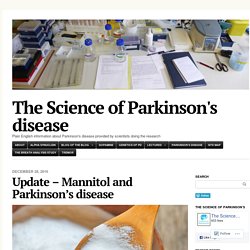 Such high levels of traffic had us scratching our heads as to why the sudden interest. Yesterday the reason became very clear. Today we are following up the Mannitol post with an update about some of the interesting developments. On the Thursday December 15th, Channel 1 (MABAT) in Israel ran the following news article: This presentation was in association with a new start-up called ‘CliniCrowd‘ which is a “crowd sourcing platform exploring disease treatments that Pharma companies have no interest to investigate or promote”.

CliniCrowd is a social impact company that has built an online platform, which provides a registry for people to sign up to and share personal experiences of researched nutriments. Cool idea. Riboflavin Has Neuroprotective Potential: Focus on Parkinson's Disease and Migraine. - PubMed - NCBI. Manna from heaven? Mannitol and Parkinson’s disease. During the forty years that the Israelites wandered the desert after leaving Egypt, they faced many hardships, most notably a scarcity of food. 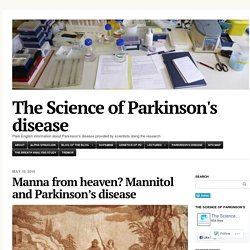 To resolve this particular issue, God kindly provided the Israelites with “bread from heaven”. It was a “fine, flake-like thing, fine as frost on the ground” and “It was like coriander seed, white, and the taste of it was like wafers made with honey” (Exodus, Chapter 16). They called “manna.” Hence the phrase: Like Manna from heaven. A Role for N-Acetyl Cysteine in Treating Parkinson's Disease. “Is turmeric useful for Parkinson’s?“ – Parkinson’s UK. Questions are important to Parkinson’s research, they help to ensure the needs of those affected are addressed, start discussions, promote the sharing of knowledge and can even initiate whole new research studies. 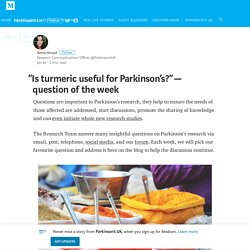 The Research Team answer many insightful questions on Parkinson’s research via email, post, telephone, social media, and our forum. Each week, we will pick our favourite question and address it here on the blog to help the discussion continue. Our question of the week… Ascorbate- and zinc-responsive parkinsonism. - PubMed - NCBI. Antibiotic doxycycline may offer hope for treatment of Parkinson's disease. Cancer drug restores brain dopamine, reduces toxic proteins in Parkinson, dementia.

Evolution may have been our planet's first recycler. 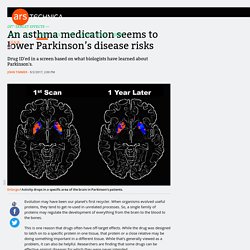 When organisms evolved useful proteins, they tend to get re-used in unrelated processes. So, a single family of proteins may regulate the development of everything from the brain to the blood to the bones. This is one reason that drugs often have off-target effects. While the drug was designed to latch on to a specific protein in one tissue, that protein or a close relative may be doing something important in a different tissue.

While that's generally viewed as a problem, it can also be helpful. That may be the case for an asthma medication called clenbuterol. Parkinson's and proteins Parkinson's disease is caused by the death of a specific group of neurons that help control muscle activity. In many of these diseases, it's not clear whether these tangles are a cause—the protein problems are killing the cells—or a symptom. There are a lot of drugs that target the adrenaline system, so the team tested similar drugs in the same assay.