Meet The Man Who Made Millennials Fall In Love With Gucci. Gucci Gang: How Hip Hop Helps Market Luxury Brands To Millennials. Need Supply Co. explains the Millennial & Gen Z luxury consumer. The luxury market is an area of growth within fashion; in the 12 months that ended June 30, 2018, the top 100 luxury companies generated 247 billion dollars in revenue and BrandZ’s report of the 100 most valuable global brands in 2019 noted luxury as the fastest growing category. 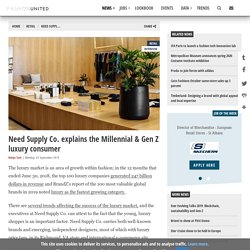 There are several trends affecting the success of the luxury market, and the executives at Need Supply Co. can attest to the fact that the young, luxury shopper is an important factor. Need Supply Co. carries both well-known brands and emerging, independent designers, most of which with luxury price tags, in its Richmond. VA store and international e-commerce site. Despite the fact that the average household income of people aged between 22 and 37 is 69 thousand dollars according to an analysis of census data conducted by Pew Research Center, Millennials and Gen-Zers are shopping luxury fashion. Why Has Hip Hop Been Adopted as the Millennial's Music Genre? Classical music was the standard, and then there was Rock and Roll. 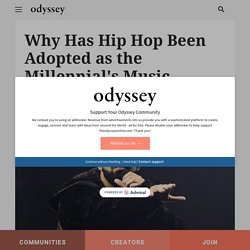 Rock and Roll was the predominant music genre for all of it's lifetime. Now, however, Rock and Roll is being overeclipsed by Hip Hop. Look at a Top 40 list, go to a Frat party, or walk down Easton Avenue (or your college campus' equivalent street), and you will hear hip hop. But go to any other generation, and there won't be much of a prevalence there. Gen X, Baby Boomers, there won't be much of a hip hop presence there. Rebellion From Older Generations. Erving Goffman's Front Stage and Back Stage Behavior. In sociology, the terms "front stage" and "back stage" refer to different behaviors that people engage in every day. 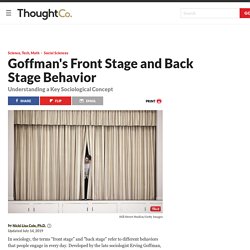 Developed by the late sociologist Erving Goffman, they form part of the dramaturgical perspective within sociology that uses the metaphor of the theater to explain social interaction. The Presentation of Self in Everyday Life Erving Goffman presented the dramaturgical perspective in the 1959 book "The Presentation of Self in Everyday Life. " A Brief History of Hip Hop Music – Distraction Magazine. These Are the Fashion Brands That Rappers Name-Drop the Most. LIL NAS X, a 20-year-old rapper from Atlanta, earned his first Billboard number-one hit this month with “Old Town Road.” 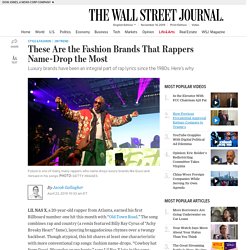 The song combines rap and country (a remix featured Billy Ray Cyrus of “Achy Breaky Heart” fame), layering braggadocious rhymes over a twangy backbeat. Though atypical, this hit shares at least one characteristic with more conventional rap songs: fashion name-drops. “Cowboy hat from Gucci, Wrangler on my booty,” raps Lil Nas X late in the song, sprinkling fashion cred into the song. (DOC) Culture and Its Elements. Deloitte uk young luxury shopper 2017. 5 Tupac Shakur Lyrics To Inspire Black Lives Matter. It’s long been said that Tupac Shakur was a visionary, but now perhaps we have the most definitive proof yet for that claim: his lasting influence on popular culture. 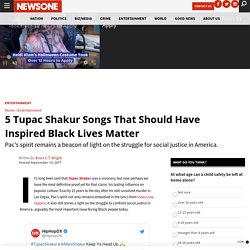 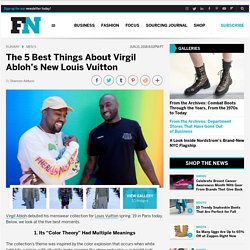 Below, we look at the five best moments. 1. Its “Color Theory” Had Multiple Meanings. How Hip-Hop and Fashion Brands Started Working Together. Dressed Like RappersOnce upon a time, high-fashion brands shunned hip-hop. 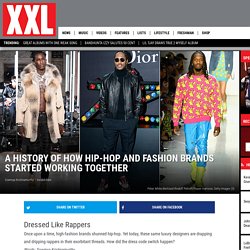 Yet today, these same luxury designers are drapping and dripping rappers in their exorbitant threads. How did the dress code switch happen? Words: Sowmya KrishnamurthyEditor’s Note: This story originally appeared in the Winter 2018 issue of XXL Magazine, on stands now. Diddy is shirtless, lounging in leather pants with a crucifix chain dangling over his taut, tatted-up torso. 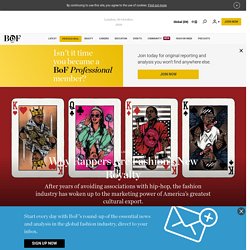 It was this unlikely front-row pairing that got the fashion flock buzzing when American designer Alexander Wang presented his Autumn/Winter 2018 collection at the old Condé Nast offices high above New York’s Times Square in February. After all, the seat next to Wintour, the most powerful figure in fashion, is usually filled by fellow magazine editors, industry chief executives, Hollywood stars — even royalty. While Wang has long been a fan of hip-hop, the placement of the 25-year-old female rapper — a Bronx native who broke out in 2017 after her track “Bodak Yellow” took the number one position on the Billboard Hot 100 Chart — speaks volumes about how the wider fashion industry has changed its stance on hip-hop, which, in December, surpassed rock to become the most popular music genre in the US.

Hip-hop artists are storytellers and news reporters of the times. 5. Chapter 4 Concept of Culture and Subculture. Global pad what is culture. How Rappers Took Over Fashion. Since its emergence in the 1970s, the evolution of hip-hop has been a truly multifaceted phenomenon. 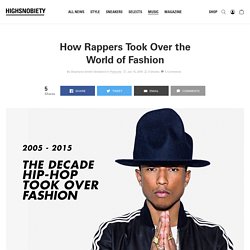 Subscribe to read. 10 Things We Learned Watching Hip-Hop Style Documentary "Fresh Dressed" Up to this point, the film has charted the insular evolution of hip-hop fashion. 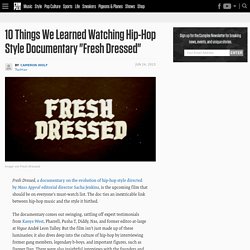 However, it's not until the early '90s that this style of dress crashes into the consciousness of mainstream America. The rise of the style coincides with the upwards trajectory of rap music in America. Suddenly, the first streetwear brand, Cross Colours, is born. "The first time we started seeing that urban really had some dollars behind it was through Cross Colours," says Elena Romero, a professor at the Fashion Institute of Technology.

What is Hip Hop Subculture? Video with Lesson Transcript. 7 ways rich millennials are redefining what luxury looks like. Millennials Infographic. How Hip-Hop Left a Lasting Influence on Streetwear & Fashion. The following excerpt appears in Highsnobiety’s new book with Gestalten: The Incomplete Highsnobiety Guide to Fashion and Street Culture. You can buy it here. Hip-hop culture has had the biggest influence on street culture, informing plenty of the style trends and clothing brands that rose to prominence. 3 Ways Millennials And Gen-Z Consumers Are Radically Transforming The Luxury Market. The global luxury market will reach €1.3 trillion (~$1.5 trillion) by 2025 driven by growth in Millennial spending. By 2025 China will represent 40% of the market, according to BCG and Altagamma.

(Photo by Budrul Chukrut/SOPA Images/LightRocket via Getty Images) Getty A new study is out that sets the stage for a radically transformed luxury market by 2025. Millennials are driving this train, and what they expect from luxury brands is radically different from previous generations. Goldman Sachs Bets On Hip Hop And Millennials For Music Revival. Getty Streaming platforms take center stage in Goldman Sachs latested forecast that music revenue is going to more than double to about $131 billion by 2030 . Currently music streaming sales are dominated by top R&B and hip-hop artists such as Drake, Kendrick Lamar, The Weeknd, Migos and Cardi B. The Story Of Hip-Hop Style, From Run DMC To ASAP Rocky. In 2002, stylist Rachel Johnson walked into a Burberry store in New York to request some clothes for a photoshoot. Her client was Ja Rule, then promoting the follow-up to his Grammy-nominated, triple-platinum album Pain is Love.

It was the kind of exposure that brands generally love, but Burberry refused to help. “They didn’t want him to wear their stuff,” Johnson later told Newsweek. “People have this stigma with the urban community.” She bought it anyway and after she draped her client in the brand’s house check, his fans did too. 93% of Consumer Engagement with Luxury Brands Happens on InstagramDigimind: Social Media Monitoring & Analytics Software. Branded content on Instagram consistently earned the most engagement across social media.

Marketers must be mindful in navigating a world of increasingly vocal, socially conscious consumers while safeguarding their brand against controversies. SINGAPORE, 30 November 2018 – Digimind, the global leader in social listening and market intelligence, released a new report that analyzed consumer discussions and interactions with leading luxury brands, such as Louis Vuitton, Hermès, Gucci, Burberry, Prada, Chanel, and more on social media, blogs, and websites. The report identifies consumer behaviors and trends, and elaborates on how to use these insights to monitor brand reputation and drive engagement. 40% of luxury purchases are influenced by what consumers see online, and their interactions with a brand.

Sea cb global powers luxury goods 2019. The Luxury Market in 2019: Consumer Trends and Behaviors. Virgil Abloh's value to Louis Vuitton isn't in selling clothes. Has Louis Vuitton made a winning bet with Virgil Abloh and Nicolas Ghesquière? - News : Business (#994381) Between the chic, modern "femme française" presented during March's Paris womenswear Fashion Week and the ethnically diverse street-couture runway unveiled at the French capital's recent men's Fashion Week, Louis Vuitton couldn't be sending a clearer message to the industry. After Kanye, After Virgil, After Heron. NEW YORK, United States — The speed with which hip-hop and high fashion have become enamored of each other is staggering. Learning from Gucci’s Wild Success with Millennials and Gen Z. Council Post: What Can Luxury Brands Learn From Gucci About Millennials?