Stanley Kubrick - Chicago 1949. A collection of films short enough to watch in your lunch break. Lunch breaks can be all too precious and when in the middle of a deadline, it can be hard to get away from the desk. 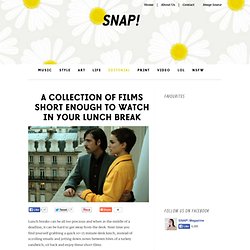 Next time you find yourself grabbing a quick 10-15 minute desk lunch, instead of scrolling emails and jotting down notes between bites of a turkey sandwich, sit back and enjoy these short films. These guys did an awesome job of collecting a series of films which are perfect for those rushed lunches. Take a deep breath, settle your napkin, relax and actually enjoy your meal. Bon appétit! Ten Cool Behind the Scenes Photographs from Famous Movies. 20 PHOTOS THAT'LL CHANGE THE WAY YOU LOOK AT MOVIES. Take a look at the below given 20 pictures that will change the way you look at the movies. we are fascinating about 3d, visual effects movies. 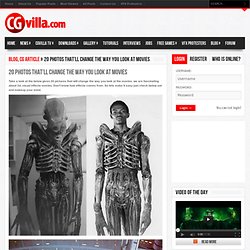 Don’t know how effects comes from. So lets make it easy just check below out and makeup your mind. source. 35 Amazing Behind The Scenes Photos From Famous Movies. The 50 Greatest Movie Monologues. When I started compiling a list of my favorite monologues in movies, the list continued to expand and expand and expand to the point where it got a little ridiculous. 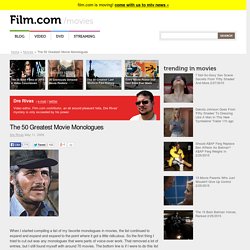 So the first thing I tried to cut out was any monologues that were parts of voice-over work. That removed a lot of entries, but I still found myself with around 70 movies. Sound Effects - The Wilhelm Scream. Hollywood Lost and Found The WILHELM Scream One sound effect that has found a following with many sound editors and observant movie fans is a distinctive scream named Wilhelm. 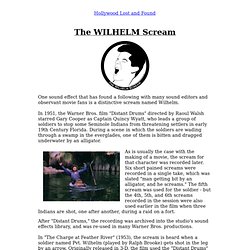 In 1951, the Warner Bros. film "Distant Drums" directed by Raoul Walsh starred Gary Cooper as Captain Quincy Wyatt, who leads a group of soldiers to stop some Seminole Indians from threatening settlers in early 19th Century Florida. During a scene in which the soldiers are wading through a swamp in the everglades, one of them is bitten and dragged underwater by an alligator. 82 mind-blowing movies facts you probably didn't know. 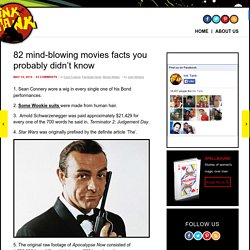 Sean Connery wore a wig in every single one of his Bond performances. 2. Some Wookie suits were made from human hair. 3. Arnold Schwarzenegger was paid approximately $21,429 for every one of the 700 words he said in, Terminator 2: Judgement Day. 4.

Film Franchises Infographic: Who Owns What? Movies. The 100 Best Films Of World Cinema. 10 Mind-Boggling Movies. - StumbleUpon. Movies you should watch before you die. Top Films of the 1990s. TOP TEN FILMS OF THE 1990s Return to Main Film Page 1. 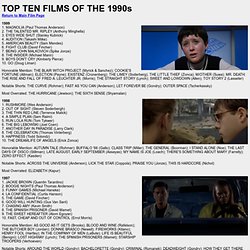 MAGNOLIA (Paul Thomas Anderson) 2. THE TALENTED MR. 10 Certified Fresh Psychological Thrillers. You Missed It: Most Unfairly Overlooked Movies Of The Decade. The 52 Most Anticipated Movies of 2013. Just yesterday, a friend of mine posted a message to her unborn child on Facebook, saying that if the little bugger came a week before the due date and ruined her chance to see Star Trek Into Darkness, there would be consequences. 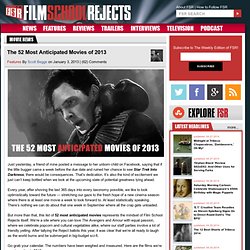 That’s dedication. It’s also the kind of excitement we just can’t keep bottled when we look at the upcoming slate of potential greatness lying ahead. Every year, after shoving the last 365 days into every taxonomy possible, we like to look optimistically toward the future — stretching our gaze to the fresh hope of a new cinema season where there is at least one movie a week to look forward to. At least statistically speaking. 30 Movies That Define Cool. Nothing says cool like a good guy movie. 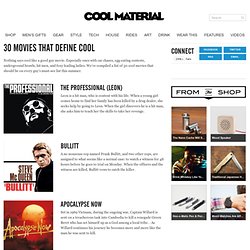 Especially ones with car chases, egg-eating contests, underground brawls, hit men, and foxy leading ladies. We’ve compiled a list of 30 cool movies that should be on every guy’s must-see list this summer. The Professional (Leon) Leon is a hit man, who is content with his life. When a young girl comes home to find her family has been killed by a drug dealer, she seeks help by going to Leon. 25 Spectacular Movies You (Probably) Haven't Seen Pt. 2. Human Traffic Very unique comedy about the drug/club culture in the UK. 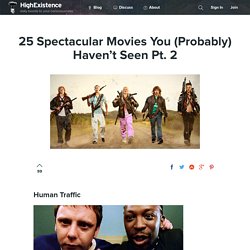 Five friends ponder society, drug use and their own lives as they go about their usual weekend of snorting, smoking, popping, dancing and sex. 12 Fun Facts about The Movie "Groundhog Day" Welcome to my post! 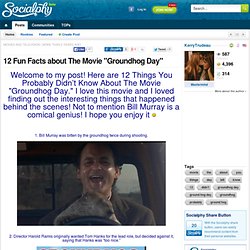 Here are 12 Things You Probably Didn’t Know About The Movie "Groundhog Day. " I love this movie and I loved finding out the interesting things that happened behind the scenes! Not to mention Bill Murray is a comical genius! Very Interesting Facts About the Movie Titanic. 33 Behind-the-Scenes Photos From Famous Movies. 10 Stories That Prove Bill Murray Really Is The Most Interesting Man In The World. Fight Club Trivia. - StumbleUpon. 30 Adorable, Amazing, and Hilarious Behind-the-Scenes Photos of 'Empire Strikes Back' That Will Make You Fall In Love All Over Again. ‘Mr. Nobody' movie review. Surprise — it’s quite good. Inception Explained - StumbleUpon.

Incredible Inception Art. I saw Inception on opening weekend and was blown away by the film. It is easily in my personal “Top 5″ movies that I have ever seen. If you haven’t seen it yet, please go out and watch it as soon as you possibly can! For those who have seen it (and those who are still waiting), here is some amazing fan made designs inspired by the movie. Enjoy! Note, none of these are my own designs. Inception is a 2010 science fiction action film written, produced, and directed by Christopher Nolan.

- StumbleUpon. 6 Mind Blowing Special Effects You Won't Believe Aren't CGI. Computer generated images are like the foam sets of the present era: 20 years from now, people are going to laugh their asses off at the fact that this stuff looked even remotely real to us. That's why, as we've mentioned before, there are still filmmakers doing special effects the old-fashioned way -- even if the results are so impressive that you'd never know it's not CGI. There's CGI in Cracked's new Adventures in Jedi School mini-series, but the humor is all a practical effect. #6.

Killer Movie Posters That You Must See. I stumbled upon this site by accident and I just had to promote the artist. His name is Justin Reed, based in Vermont and he’s a wicked Illustrator whose created quite a collection of killer illustrations of classic films. Movie posters created by the movie fans. These unofficial movie posters created by the movie fans are worse and sometimes even better than the original posters.