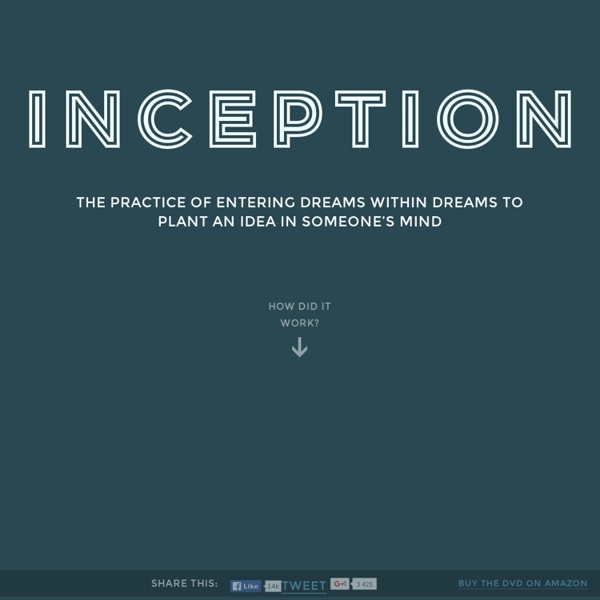 25 Spectacular Movies You (Probably) Haven’t Seen Midnight in Paris Woody Allen’s latest places starving writer Owen Wilson in Paris with his fiancée, Rachel McAdams. Searching for inspiration for his incomplete novel, Owen begins taking strolls around the city at night where he discovers an unexpected group of people. I wish I could be more specific, but it would ruin the surprise. The 52 Most Anticipated Movies of 2013 Just yesterday, a friend of mine posted a message to her unborn child on Facebook, saying that if the little bugger came a week before the due date and ruined her chance to see Star Trek Into Darkness, there would be consequences. That’s dedication. It’s also the kind of excitement we just can’t keep bottled when we look at the upcoming slate of potential greatness lying ahead.

Dark Room what is wrong with this picture? it looks as if everything has gone kind of crazy. mysterious shadows slice the world into jagged fragments whether it's day or night. meanwhile, in the corners of the room, blackness itself collects in thick pools like congealing blood. the walls are closing in like a big steel trap snapping shut in slow motion. paranoia and dread hang heavily in the air... welcome. You've just entered the world of film noir , where nothing is what it seems, and no one can be trusted.

Brain Parts Function The brain is the most complex organ in the body. It is the organ that allows us to think, have emotions, move, and even dream. Given this complexity, it should not be surprising that there are many ways to separate the parts of the brain. Brain parts can be separated on the basis of what they look like to the naked eye, under a microscope, or by what certain brain parts do. 2012 March 12 - The Scale of the Universe Interactive Discover the cosmos! Each day a different image or photograph of our fascinating universe is featured, along with a brief explanation written by a professional astronomer. 2012 March 12 The Scale of the Universe - Interactive Flash Animation Credit & Copyright: Cary & Michael Huang Explanation: What does the universe look like on small scales? On large scales?

Year In Review: The 11 Best Short Films of 2011 Over the course of the year, curating the Short Film of the Day feature has given me a deep and affecting appreciation of the art form. Before, I hadn’t given much thought to the little bastards, but the truth is that they are incredibly versatile and representative of the boundaries that film can break. They can be jokes told well or human dramas driven home. Killer Movie Posters That You Must See I stumbled upon this site by accident and I just had to promote the artist. His name is Justin Reed, based in Vermont and he’s a wicked Illustrator whose created quite a collection of killer illustrations of classic films. According to the site there will be upcoming opportunity to get your hands on a few original illustrations which were commissioned for a group show at the APW Gallery in New York. He has done 5 works based on 5 films for the show. The five films are Taxi Driver, The Godfather, The Day the Earth Stood Still, Casablanca and Monty Python and the Holy Grail.

Trilogy Art Print by Danny Haas New All « PrevNext » « Prev1234 ... 71Next » What does a doodle do? It boosts your memory and concentration You know you're bored when you start shading in the squares of your notebook. Apparently it's a habit that could be helping you to concentrate. In a neat little experiment, Jackie Andrade asked forty participants to listen to a monotone two and a half minute phone message about arrangements for a party. They were told the message would be dull, that there was no need to memorise it, but that they should write down the names of the people who would be able to attend the party.

Glaucus atlanticus These sea slugs feed on other pelagic creatures including the venomous cnidarian, the Portuguese Man o' War. Because the sea slug stores stinging nematocysts from the cnidarian within its own tissues, a human picking up the sea slug may receive a very painful sting. For more information on the effects of the nematocysts, see Portuguese man o' war. Characteristics[edit] The blue sea slug (here shown out of water, and thus collapsed) is one of the smallest members of its biological family, Glaucidae At maturity Glaucus atlanticus can be up to 3 centimetres (1.2 in) in length.[3] It is silvery grey on its dorsal side and dark and pale blue ventrally.