Nice to meet you ~ LanguageFlame. Today I would like to write about a very common situation in our everyday life- meeting new people and keeping in touch. 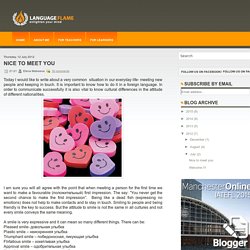 It is important to know how to do it in a foreign language. In order to communicate successfully it is also vital to know cultural differences in the attitude of different nationalities. I am sure you will all agree with the point that when meeting a person for the first time we want to make a favourable (положительный) first impression. The say: ”You never get the second chance to make the first impression”. Being like a dead fish (expressing no emotions) does not help to make contacts and to stay in touch. A smile is very expressive and it can mean so many different things. Pleased smile- довольная улыбка Plastic smile – неискренняя улыбка Triumphant smile – победоносная, ликующая улыбка Flirtatious smile – кокетливая улыбка Approval smile – одобрительная улыбка Scornful smile – презрительная улыбка Gloating smile – злорадная улыбка Loving smile – нежная улыбка What’s up?

Introducing Yourself in English - Learn to speak english. ‘A little #awkward’: Leaders of China and Japan meet for ‘saddest handshake’ [photo] Obama slammed for bowing to Japan's emperor. WASHINGTON–American right-wing critics are seizing on Barack Obama's deep bow to Japan's emperor on Saturday, accusing the president of grovelling to a foreign leader. 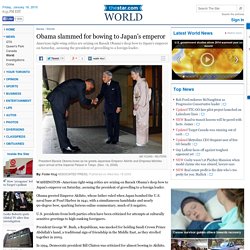 Obama greeted Emperor Akihito, whose father ruled when Japan bombed the U.S. naval base at Pearl Harbor in 1941, with a simultaneous handshake and nearly 90-degree bow, sparking furious online commentary, much of it negative. U.S. presidents from both parties often have been criticized for attempts at culturally sensitive greetings to high-ranking foreigners. President George W. Bush, a Republican, was mocked for holding Saudi Crown Prince Abdullah's hand, a traditional sign of friendship in the Middle East, as they strolled together in 2005. In 1994, Democratic president Bill Clinton was criticized for almost bowing to Akihito. President Richard Nixon, a Republican, can be seen in a Life magazine photo from 1971 bowing to Akihito's father, Emperor Hirohito. Le hug: How John Kerry made a Paris cheek-kiss faux pas.

There is "calin", which is more akin to a cuddle and unlikely to be shared between anyone except lovers or parents and their children. 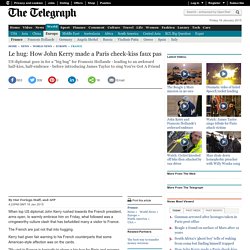 Other words or phrases are typically more romantic-sounding. Most eventually settled on the cooler sounding "accolade". But for the leader of a country where "la bise" or cheek-kissing is the standard greeting between strangers, friends and colleagues, it was never going to be easy. The towering John Kerry was metres from Hollande, striding fast, when he first opened his arms.

In turn, the French leader stretched out his, clasping Kerry's hands. Kerry caught up, accepted the kiss on his right cheek, before they clasped hands again, awkwardly placing their arms around each other as they walked side by side up the stairs into the Elysee Palace. Half-hug, half-bise, it was a moving clash of cultures. Taylor began his performance with several bars of the French national anthem. The event was called an "Hommage de John Kerry a Paris. 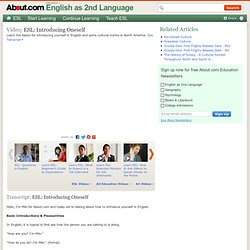 Basic Introductions & Pleasantries In English, it is typical to first ask how the person you are talking to is doing. "How are you? I'm Milo. " "How do you do? The response is always positive: "I'm fine, how are you? " "I'm well, how are you? " Many times in North America people will say they are good, which is actually incorrect as "good" is an adjective and "well" would be the correct adverb.