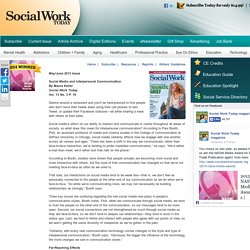 Influence in Social Media Networks: Sinan Aral at TEDxColumbiaEngineering. THE ADDICTION THAT IS PLAGUING 10% OF THE POPULATION: SMARTPHONE ADDICTION « Consumer Blog. One in ten people have revealed that they are addicted to their smartphone, according to a new study. 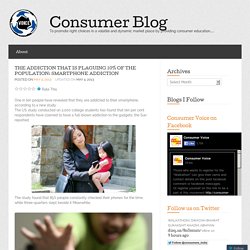 The US study conducted on 2,000 college students has found that ten per cent respondents have claimed to have a full-blown addiction to the gadgets, the Sun reported. The study found that 85% people constantly checked their phones for the time, while three-quarters slept beside it Meanwhile, counsellor Peter Smith, who reported a ten per cent increase in Brits seeking help for smartphone addiction at his clinic, said that smartphone users feel they’ve got more control to communicate with whoever they want but ironically, it’s that sense of control that creates the anxiety.

He said that it has made younger people more dependent on maintaining those contacts, which can create issues from bullying, to being marginalised and excluded. Capital - Can social media get you fired? Increasingly, as personal and professional lives become more enmeshed, even talented professionals run the risk of getting fired or not getting a new position because of what they post on social networks. 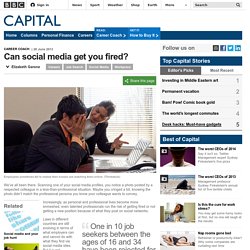 One in 10 job seekers between the ages of 16 and 34 have been rejected for a job because of something posted on their profiles. Laws in different countries are still evolving in terms of what employers can and cannot do with what they find via social media sites. But it is not uncommon for both candidates and employees, especially in the United States, to be asked to hand over their personal passwords so supervisors or human resources can access their profiles. A recent ruling in the US protected some speech on social networks from retaliation by employers, but it doesn’t cover everything. Even so, there is little doubt — whether found accidentally or purposefully — that what you post online can impact your career. 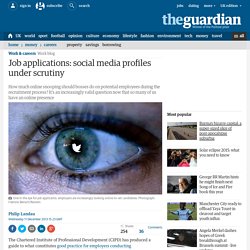 While it goes beyond simple online research into a candidate's background, it does look into how far employers should actually go in using social media checks in support of the recruitment process. It is a growing issue: recent research conducted by the CIPD showed that two out of five employers look at job applicants' online activity or profiles on sites such as Twitter, Facebook or LinkedIn at the recruitment stage. In a recent separate survey by Acas, 45% of those involved in hiring staff said they were already using social media tools in recruitment, including screening candidates by viewing their profiles, and around 40% said they would make greater use of them in the future. The CIPD's guide addresses this and other issues that recruiters need to consider. Using improper social media etiquette can affect your job.

Employers Turning to Social Media in Hiring Process. Facebook and Employers. I.chzbgr.com_.jpg (JPEG Image, 500 × 522 pixels) 'Sharenting' trends: Do parents share too much about kids on social media? Some of social media's greatest stars aren't even old enough to tweet: Pictures of kids playing dress up, having meltdowns and even in the bathtub adorn Facebook walls. 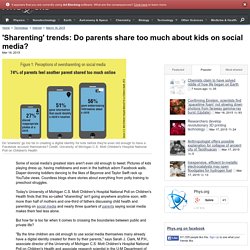 Diaper-donning toddlers dancing to the likes of Beyonce and Taylor Swift rack up YouTube views. Countless blogs share stories about everything from potty training to preschool struggles. Today's University of Michigan C.S. Mott Children's Hospital National Poll on Children's Health finds that this so-called "sharenting" isn't going anywhere anytime soon, with more than half of mothers and one-third of fathers discussing child health and parenting on social media and nearly three quarters of parents saying social media makes them feel less alone. But how far is too far when it comes to crossing the boundaries between public and private life? Oversharing - Digital Citizenship. The Instagram envy epidemic! Youngsters spend £100 a month copying celebrity style, chiefly that of Alexa Chung, David Beckham, Prince Harry and Kim Kardashian. Kim Kardashian, Cheryl Cole and Olly Murs also rank high as fashion iconsStudy by youth charity vInspired surveyed 2,000 people aged 16-25Half of those surveyed spend £100 a month copying celebrity styleRespondents also suffer from Insta-envy thanks to InstagramSome 8% of youngsters said their parents were their style inspiration By Martha De Lacey Published: 12:51 GMT, 25 November 2013 | Updated: 15:49 GMT, 26 November 2013 Young people are spending up to £100 a month attempting to emulate the style of their favourite celebrity icons, with Alexa Chung and David Beckham being the most frequently copied stars. 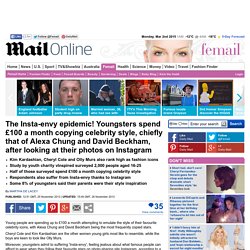 Cheryl Cole and Kim Kardashian are the other women young girls most like to resemble, while the boys are keen to look like Olly Murs. Moreover, youngsters admit to suffering 'Insta-envy', feeling jealous about what famous people can afford to wear when they follow their favourite stars on photo-sharing site Instagram, according to a study. Olly Murs' style was popular among young men. Look at this Instagram (Nickelback Parody) Selfie (TV Series 2014– ) Examining Celebrity Activism and Social Media: Lady Gaga, Fandom and Don’t Ask, Don’t Tell. Lucy Bennett is the co-founder of the Fan Studies Network. 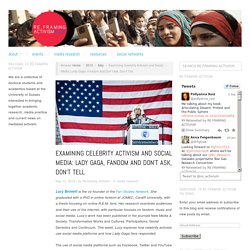 She graduated with a PhD in online fandom at JOMEC, Cardiff University, with a thesis focusing on online R.E.M. fans. Her research examines audiences and their use of the internet, with particular focuses on fandom, music and social media. Lucy’s work has been published in the journals New Media & Society, Transformative Works and Cultures, Participations, Social Semiotics and Continuum. This week, Lucy explores how celebrity activists use social media platforms and how Lady Gaga fans responded. The use of social media platforms such as Facebook, Twitter and YouTube by celebrities to communicate with their fan bases is becoming an increasingly widespread practice.

Lady Gaga has crafted a huge online following and, I would argue, is a timely example of how social media can be used as a tool by modern celebrities in an effort to connect and mobilise their fan base towards activist causes. References Bennett, L. Funny-news-11-week-13.jpg (JPEG Image, 500 × 293 pixels) Batman-hates-social-media.jpg (JPEG Image, 608 × 588 pixels) Make Money Online Blogging. Superstar Bloggers Making Fortunes Online Today I decided to research how much my favorite blog’s are earning every month and I wasn’t surprised to see some of them make over $100,000 per month. 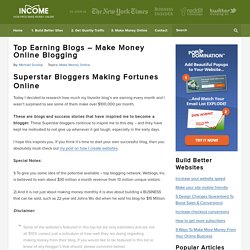 These are blogs and success stories that have inspired me to become a blogger. These Superstar bloggers continue to inspire me to this day – and they have kept me motivated to not give up whenever it got tough, especially in the early days. I hope this inspires you. If you think it’s time to start your own successful blog, then you absolutely must check out my post on how I create websites. Special Notes: 1) To give you some idea of the potential available – top blogging network, Weblogs, Inc. is believed to earn about $30 million a month revenue from 13 million unique visitors.

The Impact of Social Media on Teens

Do we Let Social Media Influence our Identity? - UNIV2013 - Finland. 13 505 social media and identity. Dissociative Facebook Identity Disorder. Our Facebook walls boost self-esteem, study finds. "Mirror, mirror on the wall/Who in the land is fairest of all? 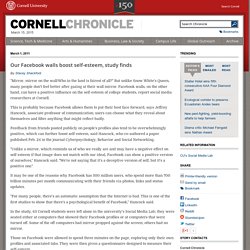 " But unlike Snow White's Queen, many people don't feel better after gazing at their wall mirror. Facebook walls, on the other hand, can have a positive influence on the self-esteem of college students, report social media researchers at Cornell. This is probably because Facebook allows them to put their best face forward, says Jeffrey Hancock, associate professor of communication; users can choose what they reveal about themselves and filter anything that might reflect badly. Feedback from friends posted publicly on people's profiles also tend to be overwhelmingly positive, which can further boost self-esteem, said Hancock, who co-authored a paper published Feb. 24 in the journal Cyberpsychology, Behavior and Social Networking. It may be one of the reasons why Facebook has 500 million users, who spend more than 700 billion minutes per month communicating with their friends via photos, links and status updates.

You Are What You Post: What Your Social Media Engagement Says About Your Personality. What do your posts on Facebook say about you? 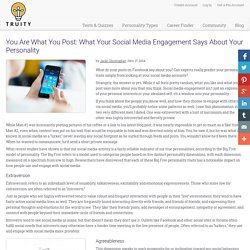 Can experts really predict your personality traits simply from looking at your social media accounts? Strangely, the answer is yes. While it all feels pretty random, what you like and what you post says more about you than you think. 5 Crazy Ways Social Media Is Changing Your Brain Right Now. Social Media and Suicide: A Public Health Perspective. 8 Shocking Suicide Attempts Posted on The Internet. The Chinese woman who appears to have posted her suicide on Instagram A young woman in China may have posted her final moments of life on Instagram. The unnamed woman, whose account is jojostai1012, uploaded a series of pictures that were directed toward her ex-boyfriend.

One of the messages, when translated, reads, “I will haunt you day and night after I'm dead. " She then posted a photo of some burning items, and a picture of her feet hanging off the ledge of a building. This was her last picture. It's not completely clear what happened next, but Chinese forum Mop shared a photo of what appears to be a woman's body lying in a pool of water in a carpark with police investigating the scene. The tragic story began about two weeks before when the young woman started posting photos with worrying captions detailing her devastation at a recent break up.