KdmcBerkeley. Mobile Journalism Archives. How do you build local engagement on Twitter? A Journal Register Co. editor mentioned a common challenge in a newsroom trying to master social media. 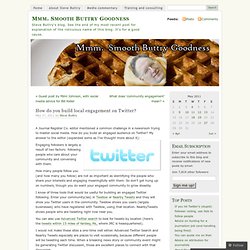 How do you build an engaged audience on Twitter? My answer to the editor (expanded some as I’ve thought more about it): Engaging followers is largely a result of two factors: following people who care about your community and conversing with them. How many people follow you (and how many you follow) are not as important as identifying the people who share your interests and engaging meaningfully with them.

So don’t get hung up on numbers, though you do want your engaged community to grow steadily. I know of three tools that would be useful for building an engaged Twitter following. You can also use Advanced Twitter search to look for tweets by location (here’s the tweets within 15 miles of Yardley, Pa., where JRC is headquartered). How To Optimize Twitter: Be Real, Profiles, RT, Hashtags & More. Twitter loves me, Twitter loves me not. 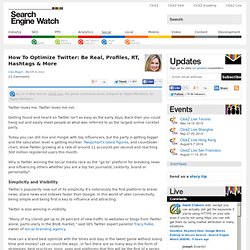 Getting found and heard on Twitter isn’t as easy as the early days. Back then you could hang out and easily meet people at what was referred to as the largest online cocktail party. Today you can still mix and mingle with top influencers, but the party is getting bigger and the saturation level is getting murkier. Twopchart’s latest figures, and countdown chart, show Twitter growing at a rate of around 11 accounts per second and reaching 500 million registered users this month. Why is Twitter winning the social media race as the “go to” platform for breaking news and influencing others whether you are a top tier journalist, celebrity, brand or personality?

Hiring in the Digital Age - Technology. Even for twentysomethings, the job description is clear: Everyone is an editor in chief. 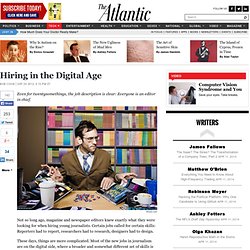 Wired.com Not so long ago, magazine and newspaper editors knew exactly what they were looking for when hiring young journalists. Certain jobs called for certain skills: Reporters had to report, researchers had to research, designers had to design. These days, things are more complicated. Most of the new jobs in journalism are on the digital side, where a broader and somewhat different set of skills is required than we print hires possessed a generation or two ago. Over the last few years at The Atlantic, I've played a part in hiring several dozen young digital journalists--into new jobs, thanks to our web expansion, or into open slots created by departing employees. Guide to Internet Information Sources for Ethical Australian Journalists. A journalist’s guide to SEO. Last week the BBC announced it was to start optimising its headlines in an attempt to gain greater visibility in the search engine results pages, so I thought I’d take a look at journalism and the web. 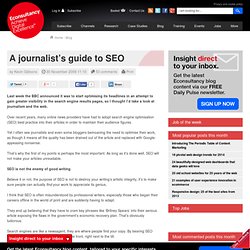 Over recent years, many online news providers have had to adopt search engine optimisation (SEO) best practice into their articles in order to maintain their audience figures. Yet I often see journalists and even some bloggers bemoaning the need to optimise their work, as though it means all the quality has been drained out of the article and replaced with Google-appeasing nonsense.

Understanding News in the Information Age. The article as luxury or byproduct. A few episodes in news make me think of the article not as the goal of journalism but as a value-added luxury or as a byproduct of the process. * See the amazing Brian Stelter covering the Joplin tornado and begging his desk at The Times to turn his tweets into a story because he had neither the connectivity nor the time to do it in the field and, besides, he was too busy doing something more precious: reporting. 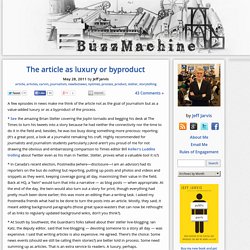 What is a fully converged journalist? What tools I use - hrwaldram. The Future of News. Nieman Journalism Lab » Pushing to the Future of Journalism. Accuracy.

WordPress, Twitter, the Elks Club: 10 new routines at a news startup. This is what a profitable post-paper newsroom looks like: And this is what it feels like: 15 hours a day, seven days a week, from the 7 a.m. check-in with your spouse-turned-business-partner to the midnight bookkeeping. 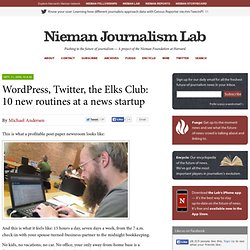 No kids, no vacations, no car. No office; your only away-from-home base is a former Main Street antique shop that sells shared-workspace memberships to freelance software developers and the like for $100 a month. Writing for the Web. Digital First journalism. CMNA 395. Cmna395.files.wordpress.com/2010/08/chapter_4_news_judgment.pdf. The Walkley Foundation - Resources. Journalism News Australian Centre for Independent Journalism (UTS)Has information on short courses and speakers, as well as happenings in the Australian journalism scene. The Poynter InstituteThis is a school for journalists in the United States. The site contains up-to-date information and research on trends in the industry, media ethics and professional practice. Today’s Front PagesAn interactive site which allows you to browse the front pages of newspapers from 75 countries.

Media & Communications InsightThis site publishes a regular update on Media and Communications law in Australia, which is definitely worth a read. Fairness & Accuracy In ReportingA US site that aims to monitor media practices and bring to light overlooked news stories. Reporters Without BordersOrganisation devoted to free press and safety of journalists worldwide. Online Tutorials / Tech Skills Guides Knight Digital Media Center TutorialsThe motherlode for learning how to use specific equipment, software and skills.