5 Examples of Animals Acting Like Humans in Art History - How To Talk About Art History. I was recently challenged by Tamar Avishai of the art history podcast The Lonely Palette to write a blog post inspired by her recent episode on C. 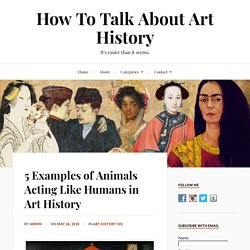 M. Coolidge’s Dogs Playing Poker, the famous series of paintings of dogs playing poker (she herself was challenged by a listener). Her episode is a great exploration of kitsch in art history and you should definitely check it out! 5 Examples of Animals Acting Like Humans in Art History - How To Talk About Art History.

George Stubbs: All Done from Nature. MK Gallery, Milton Keynes 12 October 2019 – 26 January 2020 by JOE LLOYD You might not guess it from his depictions of horses before placid parklands and prim Georgian mansions, but the art of George Stubbs (1724-1806) was born in blood and guts. 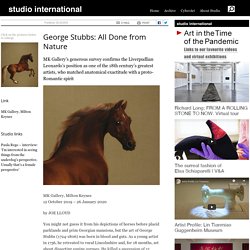 As a young artist in 1756, he retreated to rural Lincolnshire and, for 18 months, set about dissecting equine corpses. He killed a succession of 12 horses, before filling their blood vessels with wax and suspending them by hooks. Thus prepared, he would gradually strip off their skin, at each stage drawing what he beheld. Disturbing Animal Sculptures Inspired By The Darkest Human Emotions. Beth Cavener encases human emotions in forest animal forms. 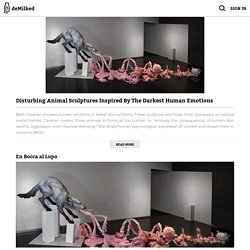 These sculpture are made from stoneware on various metal frames. Cavener creates these animals in forms all too human, to “embody the consequences of human fear, apathy, aggression, and misunderstanding”. She strips human psychological expression of context and shows them in uncanny detail. “I want to pry at those uncomfortable, awkward edges between animal and human.” Cavener writes on her website. More info: followtheblackrabbit.com | facebook (h/t: designyoutrust) Read more En Bocca al Lupo Trapped The Sentimental Question Obariyon Tangle Up In You Forgiveness Kept Unrequited Commited L’Amante. 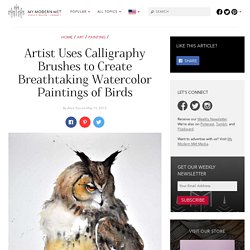 What’s most fascinating is that he paints all of his works by memory, without reference to any guide. What you’ll notice first are the sweeping brushstrokes and then you’ll see all the fine details. While he uses large Japanese and Chinese calligraphy brushes to create the general shape and posture of the birds, the intricate markings of them are done using charcoal pencil and smaller calligraphy brushes. Martens studied birds for so long that he knows how to paint both the large and subtle differences including the birds’ beaks.Martens is inspired by Shih-t’ao (1642-1707), one of the most famous Chinese painters in the early Qing dynasty. Animals in Japanese Folklore. The zodiac animals are a set of calendar symbols imported to Japan from ancient China. 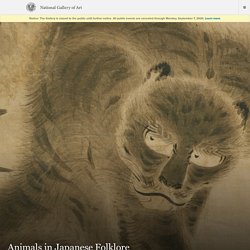 Each animal represents a year in a twelve-year cycle that is based on Jupiter’s orbit—the planet takes nearly twelve earth years to circumnavigate the sun. These symbolic animals, still in use today, follow this cyclical order: rat, ox, tiger, rabbit, dragon, snake, horse, goat, monkey, rooster, dog, and boar. A Japanese zodiac animal came to be linked to specific character traits, which were thought to influence the personality of anyone born in its year. For instance, those born in the Year of the Rabbit, which was associated with creativity, might share its talents and ideas! In antiquity the dragon, leader of the zodiac animals, was often shown as masculine, while the snake was depicted with feminine qualities. The zodiac animals are often depicted as poets engaged in a contest, with a deer accorded the honor of judging the various poems. The Tradition of Horse Paintings in Art. September 13, 2016 Deeply invested in modern and contemporary art, the Widewalls magazine aims at providing a unique experience for its readers in the form of in-depth and quality journalism. 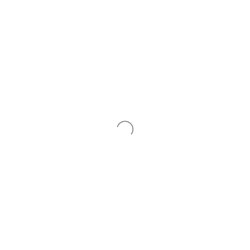 It is probably safe to say that a great majority of us, whether we’re art connoisseurs or not, came across horse paintings at least once in our lives. Now that you think about it, it was perhaps more than that one time too, because the truth is that paintings of horses are among the most common artworks out there. We are talking about the entire history of equine arts, going back thousands of years, delivering a fascinating visual homage to this animal, as marvellous now as it always was.

How to Draw Animals. Category:Animals in art. The top 10 animal portraits in art. Carel Fabritius – The Goldfinch (1654) In this subtle and lifelike painting, Fabritius concentrates on a pet bird with a fascination at once emotional and scientific. 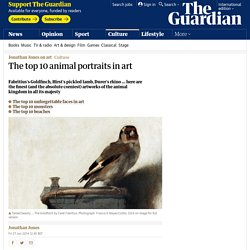 He paints the bird's feathers in free, almost impressionistic brush strokes. Yet there's something sad about it, something forlorn. Fabritius himself was to die young. His painted bird is lonely and vulnerable in its tamed beauty. Albrecht Durer – The Rhinoceros (1515) Famously, Durer had never seen a rhino. Damien Hirst – Away from the Flock (1994)

Animals in Art. RWS Archive in Focus: Robert Hills (1769-1844) The RWS archivist, Edith, has been making productive use of this period of lockdown! 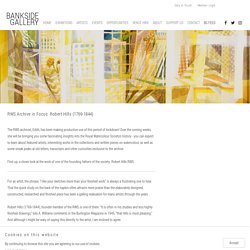 Over the coming weeks, she will be bringing you some fascinating insights into the Royal Watercolour Society's history - you can expect to learn about featured artists, interesting works in the collections and written pieces on watercolour, as well as some sneak peaks at old letters, transcripts and other curiosities exclusive to the archive. First up, a closer look at the work of one of the founding fathers of the society: Robert Hills RWS. For an artist, the phrase, "I like your sketches more than your finished work," is always a frustrating one to hear. That the quick study on the back of the napkin often attracts more praise than the elaborately designed, constructed, researched and finished piece has been a galling realisation for many artists through the years.

Animal Drawings Through the Ages - Exhibitions – past. Recumbent Lion Facing Right, Rembrandt Harmensz. van Rijn, after c. 1660 - 1664From fierce predators to the tiniest of creatures, the wonders of the animal kingdom have been reflected in art for centuries. 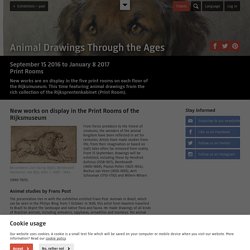 Artists have made studies from life, from their imagination or based on (tall) tales often far removed from reality. From 15 September, drawings will be exhibited, including those by Hendrick Goltzius (1558-1617), Rembrandt (1606-1669), Paulus Potter (1625-1654), Rochus van Veen (1630-1693), Aert Schouman (1710-1792) and Willem Witsen (1860-1923). Animal studies by Frans Post The presentation ties in with the exhibition entitled Frans Post. Animals in Brazil, which can be seen in the Philips Wing from 7 October. Society of Wildlife Artists - SWLASociety of Wildlife Artists – SWLA. Field Museum Paintings: The Wildlife Watercolor Paintings of Peggy Macnamara. Painter Peggy Macnamara is no ordinary watercolorist. 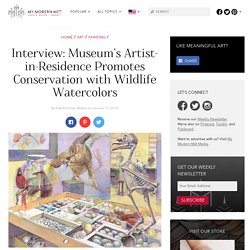 As the Chicago Field Museum‘s artist-in-residence, Macnamara’s muses include ancient vases, animal specimens, and other priceless artifacts that surround her on a daily basis. This fascinating career has led to an even more unique opportunity, as Macnamara’s art now aids in the crucial conservation efforts of the museum’s Keller Science Action Center. With their kaleidoscopic hues and loosely rendered lines, Macnamara’s whimsical watercolor paintings may not look like traditional naturalist studies; however, they have achieved exactly what the museum had hoped for. In addition to bringing attention to unique species of wildlife, they have helped the Action Center to make a case for Yaguas National Park, a preserve in the Peruvian Amazon supported by the institution. Animals in Art – Teaching Resource. Contents Introduction Under the Sea Rainforests Habitats in Danger Out of Nature Myths and Legends Growth Introduction Animals have been a source of inspiration for many artists.

From art about rural life and growth, to myths and legends, animals are used in art in many different ways. Art can help us explore our relationship to wildlife and can help us think about how we care for animals and the environment. Below we have some hands-on activities and questions to help you and your class discover animal artworks in the Tate collection.