Get rid of “Outstanding” for good. Not long ago, it felt like everything in an English school could be Outstanding. 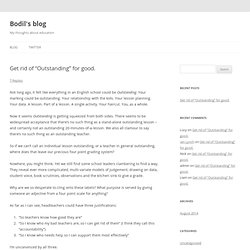 Your marking could be outstanding. Your relationship with the kids. Your lesson planning. Your data. A lesson. Now it seems Outstanding is getting squeezed from both sides. So if we can’t call an individual lesson outstanding, or a teacher in general outstanding, where does that leave our precious four point grading system? Nowhere, you might think. Does Grading Improve Teaching? by @Mroberts90Matt. Context With the release of the New Osted Handbook recently, there has been a lot of discussion about the various changes detailed therein. 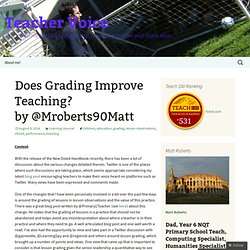 Twitter is one of the places where such discussions are taking place, which seems appropriate considering my latest blog post encouraging teachers to make their voice heard on platforms such as Twitter. Many views have been expressed and comments made. One of the changes that I have been personally involved in a bit over the past few days is around the grading of lessons in lesson observations and the value of this practice. First Impressions of the New OFSTED Handbook. The new OFSTED handbook is out and can be found here. 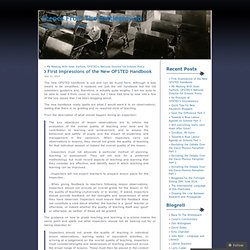 Although it was meant to be simplified, it replaces not just the old handbook but the old subsidiary guidance and, therefore, is actually quite lengthy. Ofsted’s new Inspection Handbook – a cause for celebration. As detailed by Old Andrew here, I attended a meeting with the new National Director for Schools Policy, Sean Harford in Birmingham on Friday 25th July. 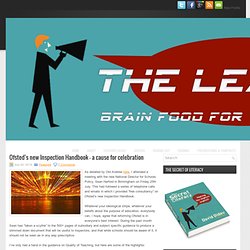 This had followed a series of telephone calls and emails in which I provided “free consultancy” on Ofsted’s new Inspection Handbook. Whatever your ideological stripe, whatever your beliefs about the purpose of education, everybody can, I hope, agree that reforming Ofsted is in everyone’s best interest. During the past month Sean has “taken a scythe” to the 500+ pages of subsidiary and subject specific guidance to produce a slimmed down document that will be useful to inspectors, and that while schools should be aware of it, it should not be seen as in any way prescriptive. Ofsted: The end of the (lesson grading) affair. Getting it right: The importance of observations by @TeacherToolkit (Part 1/2) The role of observations over the last few weeks, if not months, has debated the purpose of observations; the place – if any – for 20 minute observations; progress over time; one-off, snapshot judgements; the purpose of OFSTED and so forth and so forth. 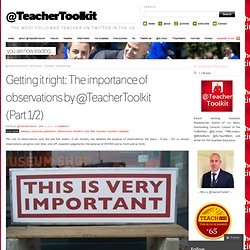 Context: What we have been trying to do within our school, is begin the dialogue with our own leadership team about the latest Ofsted headlines published 6 week ago in February 2014. Lesson observations from two lead inspectors' point of view. Keeping up with OfSTED’s Goalposts. What SLTs should do. My blog post reporting on a bloggers’ meeting with OfSTED has gone crazy. 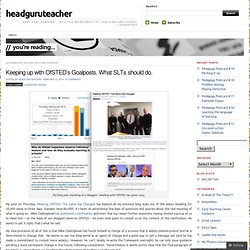 My post on Thursday, Meeting OfSTED: The Game has Changed has blasted all my previous blog stats out of the water, heading for 50,000 views in three days. Are we any clearer? Ofsted explain what they do and don’t do. The story so far… On Tuesday I, and four other education bloggers met with Ofsted’s National Director of Schools Mike Cladingbowl to discuss, among other things, now and why lessons are graded by Ofsted. 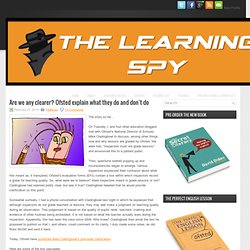 We were told, “Inspectors must not grade lessons,” and announced this to a jubilant public. Then, questions started popping up and inconsistencies began to emerge. Various inspectors expressed their confusion about what this meant as, it transpired, Ofsted’s evaluation forms (EFs) contain a box within which inspectors record a grade for teaching quality. So, what were we to believe? Somewhat surreally, I had a phone conversation with Cladingbowl last night in which he explained that although inspectors do not grade teachers or lessons, they may well make a judgment on teaching quality during an observation.

More haste: more chaos! I am finding it increasingly frustrating lately that so much of what is being changed in education at the moment is being rushed. 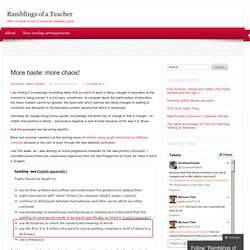 It is too easy, sometimes, to complain about the politicisation of education, but these matters cannot be ignored: the haste with which policies are being changed is leading to confusion and disruption in the education system beyond that which is necessary. Inevitably all change brings some upsets, but perhaps the worst risk of change is that a change – no matter how positive in theory – becomes a negative in and of itself because of the way it is driven.

And the examples are becoming plentiful. Back last summer I pointed out the looming issue of children being taught and tested on different curricula because of the rush to push through the new National Curriculum. Surely any amount of simple proof-reading or editing would have picked up that these two objectives, while very differently-worded, have essentially the same meaning? Why%20do%20Ofsted%20inspectors%20observe%20individual%20lessons%20and%20how%2... Meeting OfSTED: The Game has Changed. Left to right: @TomBennett71; @LearningSpy; @ClerkToGovernor; Mike Cladingbowl; @headguruteacher & @TeacherToolkit (18.2.14) This post follows on from the excellent accounts from David Didau (@LearningSpy) and Ross McGill (@TeacherToolkit) about our meeting with Mike Cladingbowl at OfSTED HQ on Tuesday this week. 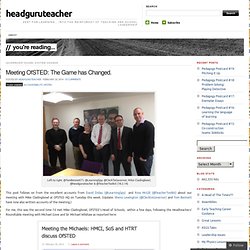 (Update: Shena Lewington (@ClerktoGovernor) and Tom Bennett have now also written accounts of the meeting.) For me, this was the second time I’d met Mike Cladingbowl, OfSTED’s Head of Schools, within a few days, following the Headteachers’ Roundtable meeting with Michael Gove and Sir Michael Wilshaw as reported here: The Headteachers’ Roundtable Meeting. Click to follow the link. What I learned from my visit to Ofsted. Before reporting on my impressions of the conversation Tom “behaviour guru” Bennett, Ross “the most followed teacher in the UK” McGill, Sheena “Clerk to Governor” Lewington, Tom “head guru” Sherrington and I had with Ofsted’s Director of Schools, Mike Cladingbowl, I first need to make a few things clear. 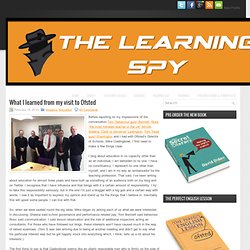 I blog about education in no capacity other than as an individual. I am beholden to no one. I have no constituency. I represent no one other than myself, and I am in no way an ambassador for the teaching profession. An edu-blogger mandate for @OfstedNews by. If you have been following my blogs recently, you will be fully aware of what has happened today. There is so much to blog here; and I have promised myself to just share the headlines from today’s meeting at Ofsted headquarters – Aviation House.

Kingsway, London. We have also been promised the minutes from today, so we will share these with you at a later date … Stepping away from observational judgements by @TeacherTookit. Conundrum: If we are to truly move away from (one-off) lesson observation judgements – particularly, on teachers of individual lessons – then we must make a start and stop making judgements on teachers in those lessons; and also when providing verbal feedback. In the article I pose two questions: Is the removal of judgements (or a framework) helpful?

As a profession, can we do it?