Inspecting education quality Lesson observation report. Ofsted's worrying reliability findings won't comfort heads. Tes. Eif a4 infographic. How to do well in the new Ofsted… Graphically Exposing Ofsted Bias? Over the years, Ofsted has consistently claimed that schools working in deprived or challenging areas – their pupils, staff and leaders – are duly recognised for the quality of work they do. 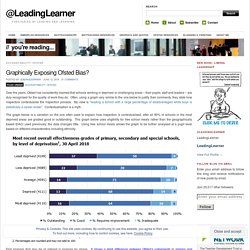 Often, using a graph very similar to the one below to justify their comments, they state how inspectors contextualise the inspection process. My view is “leading a school with a large percentage of disadvantaged white boys is statistically a career-ender”. Contextualisation is a myth. The graph below is a variation on the one often used to explain how inspection is contextualised; after all 80% of schools in the most deprived areas are graded good or outstanding. This graph below uses eligibility for free school meals rather than the geographically based IDACI used previously; the data changes little.

First analysis that may be of interest is analysis by phase. Cut the primary school data again for ethnicity and another interesting pattern appears. Like this: Like Loading... 'Teachers only ever have a small impact on students' results' There is little evidence to suggest we can link the performance of a teacher to a set or sets of exam results. 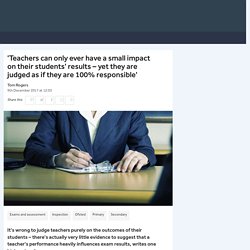 There is, however, plenty of evidence to suggest hereditary and environmental factors have the dominant impact. This evidence seems to be conveniently ignored. In a recent and extensive study by researchers at Kings College in London, they concluded that individual differences in educational achievement at the end of compulsory education are not primarily an index of the quality of teachers or schools: much more of the variance of GCSE scores can be attributed to genetics than to school or family environment. In a national twin sample of 11,117 16-year-olds, they found that heritability was substantial for overall GCSE performance for compulsory core subjects (58 per cent) as well as for each of them individually: English (52 per cent), mathematics (55 per cent) and science (58 per cent). 'Teacher factor' Uncomfortable reality Direct correlation Something to shout about. Why is the Quality of Teaching, Learning and Assessment inspected?

Why is the Quality of Teaching, Learning and Assessment inspected? 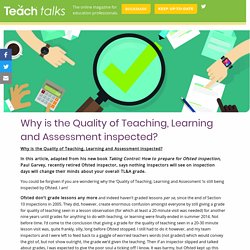 In this article, adapted from his new book Taking Control: How to prepare for Ofsted inspection, Paul Garvey, recently retired Ofsted inspector, says nothing inspectors will see on inspection days will change their minds about your overall TL&A grade. Ernment proposals for Ofsted inspections. Many of you will have read or heard about the Government’s White Paper: Educational Excellence Everywhere, published last week, announcing the transformation of England’s schools. 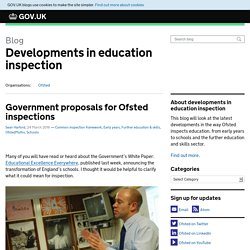 I thought it would be helpful to clarify what it could mean for inspection. Removal of the separate teaching, learning and assessment judgement The paper proposes that Ofsted removes the specific judgement on the quality of teaching, learning and assessment from our inspections of schools. As the White Paper sets out, Ofsted will, of course, consult on this proposed change.

However, because we now operate under a common inspection framework, the consultation will cover the impact of the proposal on early years, further education and skills, as well as school inspections. It is important to note that this proposal would not signal an end to classroom visits by inspectors. Seven questions inspectors will ask schools under Ofsted's new regime. Sir Michael Wilshaw, Ofsted’s chief inspector, today set out the biggest changes to education inspection in this country in more than 20 years. 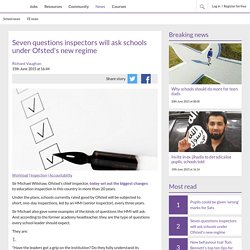 Under the plans, schools currently rated good by Ofsted will be subjected to short, one-day inspections, led by an HMI (senior inspector), every three years. Sir Michael also gave some examples of the kinds of questions the HMI will ask. And according to the former academy headteacher, they are the type of questions every school leader should expect. School Data Updates. Despite the reduction in scale and scope of local authority education services over the past few years, their school improvement remit remains. 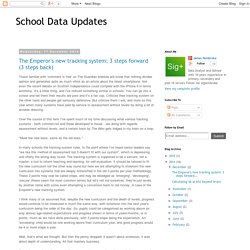 LAs have a responsibility to support and challenge schools, to intervene where necessary and to help drive up standards; the aim being for all pupils to have access to a good standard of education. School improvement teams rely on a number sources of data to gain insight into school performance; and use that data to identify schools whose performance gives cause for concern. 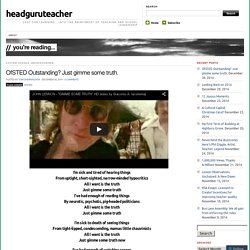 But the chorus kind of works doesn’t it? Just Gimme Some Truth!! 1. 2. 3. 1. 2. What are @OfstedNews Now Saying? by. Ofsted published an updated version of the School Inspection Handbook on 31st July 2014. 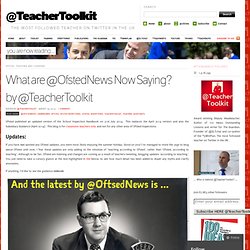 This replaces the April 2014 version and also the Subsidiary Guidance (April 2014). OFSTED 2014 July Updates. OFSTED as usual are seemingly busy moving goal posts while we are all off trying to recuperate. 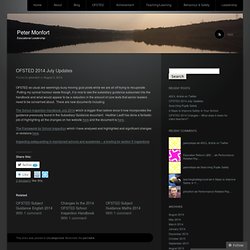 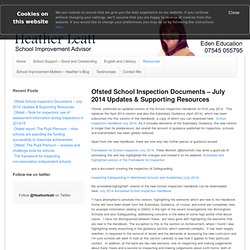 This replaces the April 2014 version and also the Subsidiary Guidance (April 2014), which has been subsumed into this version of the Handbook, a copy of which you can download here: School Inspection Handbook July 2014 As it includes elements of the Subsidiary Guidance, the new version is longer than its predecessor, but overall the amount of guidance published for inspectors, schools and stakeholders has been greatly reduced. Apart from the new Handbook, there are now only two further pieces of guidance issued: Framework for School Inspection July 2014. Peter Monfort (@pmonfort) has done a good job of annotating this and has highlighted the changes and shared it on his website: Annotated and highlighted version of the Framework for Inspection and a document covering the inspection of Safeguarding: Inspecting Safeguarding in Maintained Schools and Academies (July 2014) Ofsted’s new Inspection Handbook – a cause for celebration. As detailed by Old Andrew here, I attended a meeting with the new National Director for Schools Policy, Sean Harford in Birmingham on Friday 25th July.

This had followed a series of telephone calls and emails in which I provided “free consultancy” on Ofsted’s new Inspection Handbook. Whatever your ideological stripe, whatever your beliefs about the purpose of education, everybody can, I hope, agree that reforming Ofsted is in everyone’s best interest. During the past month Sean has “taken a scythe” to the 500+ pages of subsidiary and subject specific guidance to produce a slimmed down document that will be useful to inspectors, and that while schools should be aware of it, it should not be seen as in any way prescriptive. I’ve only had a hand in the guidance on Quality of Teaching, but here are some of the highlights: Inspectors should not grade the quality of teaching in individual lesson observations, learning walks or equivalent activities. Related posts Like this: Like Loading... Designing the perfect computing curriculum. When pupils and staff return to school in September, a new computing curriculum will begin.

Jon Chippindall, a Year 5 teacher working in Manchester, discusses how teachers can make the most of the new setup. You Can't Fatten a Pig by Weighing It - www.suecowley.co.uk. Get yourself through Ofsted…the old fashioned way. As I was clearing out my cupboard before the start of term, I came across an old battered document. A tried and tested guide for getting through a full ofsted inspection. I have included some of the main highlights. Do feel free to use them, share them maybe even improve upon them (that last bit is highly unlikely, I think you’ll agree). Enjoy. Engaging with an Ofsted Inspector An Ofsted inspector will at some point attempt to catch you off-guard by asking you questions. Watch out for their question openers as they often begin a cruel streak of questions with the simple opener: ‘Excuse me, may I have a quick word?’ Ignore and continue about you business.Pretend you are a first aid trained member of staff, say there is an emergency that requires your attention and leave using the nearest fire escape.State that they are in breach of their inspection procedures and contact your union.Clutch your knee and scream ‘Ow…why did you kick me?