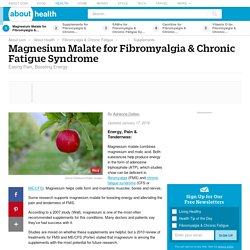 Energy, Pain & Tenderness: Magnesium + Malic Acid: One-Two Punch for Pain & Fatigue. A combination of magnesium and malic acid tops the list of recommendations for easing pain and fatigue, especially for those with fibromyalgia or ME/CFS. 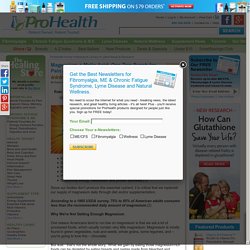 Magnesium (Mg) is one of the most important nutrients required by our bodies. It is necessary for more than 300 biochemical reactions in the body and is essential to human life. A few of magnesium's functions include: Maintaining normal muscle and nerve function. Keeping heart rhythm steady. According to a 1985 USDA survey, 75% to 85% of American adults consume less than the recommended daily amount of magnesium.(2) Why We're Not Getting Enough Magnesium One reason Americans tend to run low on magnesium is that we eat a lot of processed foods, which usually contain very little magnesium.

But wait - that's not the whole story. A poor diet is not the only culprit, though. It can be difficult to detect a magnesium deficiency. Most nutritional deficiencies can be revealed through a blood test. Fibromyalgia and Magnesium Deficiency Dr. Summary. Boswellia New Studies Show Effective Pain Relief. Of the ten leading causes of mortality in the United States, chronic, low-level inflammation contributes to the pathogenesis of at least six.1-7 Despite this fact, no safe solution exists to battle chronic inflammation. 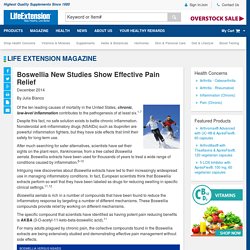 Nonsteroidal anti-inflammatory drugs (NSAIDs) such as ibuprofen are powerful inflammation fighters, but they have side effects that limit their safety for long-term use. After much searching for safer alternatives, scientists have set their sights on the plant resin, frankincense, from a tree called Boswellia serrata. New Roots Herbal. Common alpha-lipoic acid supplements are a 50/50 mixture of the natural acid and the synthetic acid; these mixtures are called “racemic mixtures” or “racemates.” 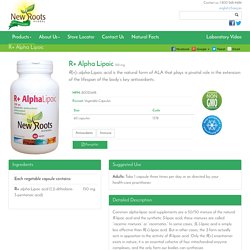 In some cases, acid is simply less effective than acid. But in other cases, the S form actually acts in opposition to the activity of acid. Only the enantiomer exists in nature; it is an essential cofactor of four mitochondrial enzyme complexes, and the only form our bodies can synthesize. alpha-Lipoic acid also plays an important role in the synergism of antioxidants, what some doctors prefer to call the body’s “antioxidant network.” It directly recycles and extends the metabolic life spans of vitamin C, glutathione, and coenzyme Q10, and it indirectly renews vitamin E. In Germany, alpha-lipoic acid is an approved medical treatment for peripheral neuropathy, a common complication of diabetes. 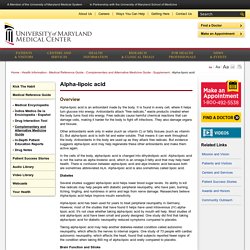 It is found in every cell, where it helps turn glucose into energy. Antioxidants attack "free radicals," waste products created when the body turns food into energy. Free radicals cause harmful chemical reactions that can damage cells, making it harder for the body to fight off infections. They also damage organs and tissues. Other antioxidants work only in water (such as vitamin C) or fatty tissues (such as vitamin E). 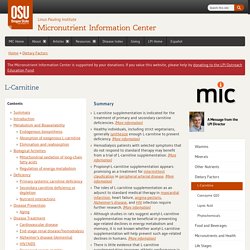