Starseed Characteristics - who and what are we. Which star system did YOU originate from? Last updated on July 6, 2011 at 12:00 am EDT by in5d Alternative News * Visit in5D Connection where you can find your soul mate or join one of our amazing groups. 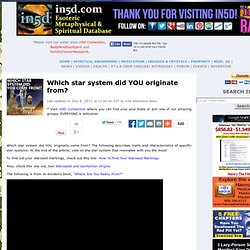 EVERYONE is welcome! Which star system did YOU originally come from? The following describes traits and characteristics of specific star systems. At the end of the article, vote on the star system that resonates with you the most! To find out your starseed markings, check out this link: How To Find Your Starseed Markings Also, check this one out, too! The following is from Jo Amidon's book, "Where Are You Really From? " Vega Those who have Vega as their planetary origin are self sufficient, independent, proud and strong willed. Those from Vega are travelers who seek variety, challenge and understanding of the many questions they have within. Most from Vega have a strong sense of responsibility, nurturing and caring. Vegans have healing abilities, and may have an affinity for stones and crystals.

Sirius Pvila Pleiades Orion Maldeck. The Pleiadian Message - A Wake Up Call For the Family of Light. Clifford Stone: The Arcturians – Architects of a New Dawn. In light of some comments made to me by Michael Ellegion during my reading with him, The Arcturians play such a crucial role in the unfolding of an “exotic” society which apparently spreads far and wide. 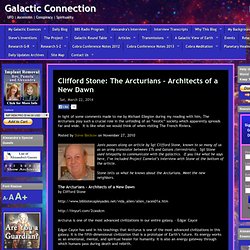 It is like what we would think of when visiting The French Riviera. Posted by Steve Beckow on November 27, 2010 Janis passes along an article by Sgt Clifford Stone, known to so many of us as an army translator between ETs and Gaians (terrestrials). Sgt Stone used telepathy to communicate with the galactics. Pleiades. Pleiades The Pleiades also known as M45 or the Seven Sisters, is the name of an open cluster in the constellation of Taurus. 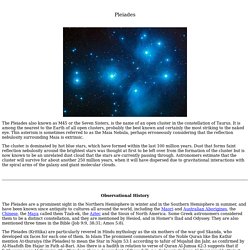 It is among the nearest to the Earth of all open clusters, probably the best known and certainly the most striking to the naked eye. This asterism is sometimes referred to as the Maia Nebula, perhaps erroneously considering that the reflection nebulosity surrounding Maia is extrinsic. The Pleiadians- The Helpers of Humanity. In this post, I will profile the Pleiadians, I had planned on doing a profile of the Reptilians but seeing that I already did a post on them, I will move on to another Galactic Race. 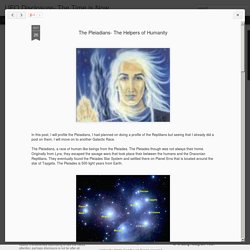 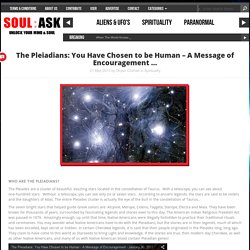 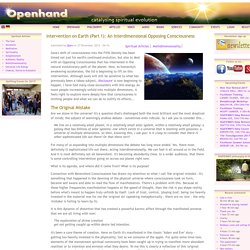 Now, as humanity's awakening accelerates, the lid is beginning to lift on this Intervention. Although souls will still be sensitive to what has previously been a taboo subject, 'disclosure' is now beginning to happen. I have had many close encounters with this energy. As more people increasingly unfold into multiple dimensions, it feels right to explore more deeply how that consciousness is limiting people and what we can do to nullify its effects... Barbara Marciniak: BRINGERS OF THE DAWN - Teachings of the Pleiadians. Www.cosmic-people.com www.angels-heaven.org I offer thanks to my friends, relatives, and ancestors whose strength of purpose led me to my own. 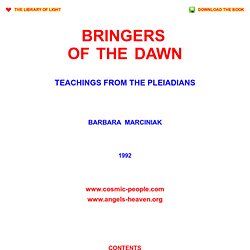 A special thanks to my sister Karen, for her deep love and dedication to me and the "P's. Part 1 > Earth: Pleiadian Keys to the Living Library > Teachings from the Pleiadians > Galleries of Inspiration Sound Theater. Starseeds. Starseed Characteristics - who and what are we. Which star system did YOU originate from? Comet Lovejoy and the Sirius/Pleiades Pertubation. Pauline Battell – Star Seed – Lightarian (TM) Rays Master-Practitioner – Reiki Kundalini Master-teacher – Spiritual Channeller – Lightworker. 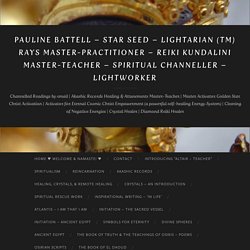 The Pleiadians appear to humans as light colored beings that are larger than life. They emanate pure Love and pure Light in a kaleidoscope of energetic frequencies. The Pleiadians are first energetic beings and when we bring our attention to them, we can start to tune into their energy. RA’s Message. The 5D Pleiadian to 6D Sirian Shift. This article is an expansion on something I talked about here In that article I mentioned about seeing and realizing that my etheric entourage, my higher dimensional “Ascension Assistance” Crew had changed (again) at the start of 2014. 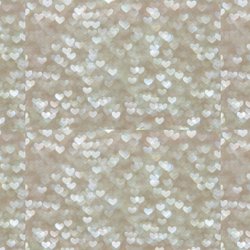 In that article I talked about this Ascension related process happening on an individual, personal level and why the changing of our individual nonphysical “Guides”, “Ascension Assistants”, “Helpers” etc. becomes necessary at different stages of our lives and ongoing development. However, in this article I want to discuss how this same thing, this same process is happening on a grand scale for all of humanity, earth, and beyond. Discover the cosmos! 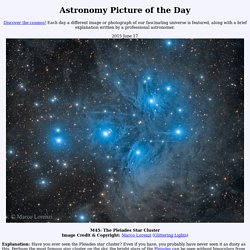 Each day a different image or photograph of our fascinating universe is featured, along with a brief explanation written by a professional astronomer. 2015 June 17. Pleiadian planets. The Fifth Perspective: Transcending Space and Time. A Hathor Planetary Message through Tom Kenyon Entering into higher dimensions of consciousness requires a fundamental shift in perceived time and space. This is a crucial shift in perception that we wish to address using a theoretical perspective and a practical technique, which includes the use of a sound meditation we have created for this purpose.

In our book `2012 Rising The Last Tzolkin´ we wrote partly on the life that we shared in 7th century Palenque as part of the backstory. Here I will introduce our story to other members. If folks are interested I will keep on detailing it.. It is hard to know where best to begin but I will first say that Daniella and I have had lives full of supernormal and psychic events. It was quite clear that we were not the average human beings. A Wakeup Call - Starseeds. The term starseeds has its roots in Native American beliefs that the early inhabitants of this planet were genetic creations by visitors from other planetary systems.

Many believe these people come from the Pleiades star system, although others believe the Pleiadians are just one of many star groups that have seeded this planet. The awakening and activation of these starseeds is set for a specific time and purpose, relative to the evolution of this planet, which has been likened to a grand enlightenment, a graduation into a higher awareness, for the planet and its peoples. Fiirst, to understand the concept of starseeds awakening and activation, one needs to have a clear understanding of reincarnation and also time and space. If we consider that we are spiritual beings having a physical experience, then are any of us really from this planet Earth? From that perspective, perhaps we are all visitors here, having a human experience. Pleiadian, Arcturian and Sirian Star People.

The Sirian Revelations - Channeled Teachings for the Awakening of Earth. Hand Clow 2012: Home. Imagine you have never read or heard of Barbara Hand Clow, and you find yourself sitting in an audience at a workshop a friend of yours insisted that you attend. Or you're a fan of Barbara, who finally gets to see her for the first time. An energetic, clear, intelligent woman with a long braid of blond-white hair stands at the podium. She engages you with a happy smile, makes a joke about the present political situation, then slugs down a gulp of water as she strides toward the tall poster [see Figure 12 from The Pleiadian Agenda] showing a bold vertical-axis line curving through the nine dimensions and beyond. Barbara Hand Clow has taken her masterful work, The Pleiadian Agenda, and its teachings on Goddess Alchemy, and woven them into a workshop intended for all levels of students. Pleiadian Teachings From Ancient Egypt. I’ve written a bit already about my past life memory of the 6D teachings from the Sirian Sacred Architect in ancient Egypt.

In this entry I’d like to share a scene from this same past life in Egypt of 12,600 B.C., but with the 5D Pleiadian teacher and what he taught us. After this I’ll share about the 8D Orion, what he was like, his physical appearance, and what he taught me that I remember. But first, the 5th dimensional Pleiadian and his particular teachings. Council of Nine: Divine by Nature. “Snowy Summit”, acrylic on canvas, 16″ x 20″, Eliza Ayres, 2015. The Art of a Pleiadian Starseed. There are two distinctive types of people upon planet Earth, at this time – Starseeds and Star Terrans. Starseeds from the Pleiades for example, are very gentle, easy going and extremely sensitive. Their vibration is sensual, loving and exstatic with a great need for beauty, upliftment, relaxation and nature.

They dont make waves and heal through music, emotional poetry and art that stimulates the love in our hearts ♥ www.annett-bank.co.uk ♥ They radiate out serenity, harmony and inner contentment and tend to dress simply, in colourful, flowing robes, made of natural fibres. Pleiadian children naturally dislike restriction, dictatorship and loss of personal freedom, they are often slim, lightly boned with a slender build. Pleiadians - A Thorough Explanation. Christine Day Online - The Pleiadian Story. IN 1994 I HAD MY FIRST CONSCIOUS CONNECTION TO AND communication with the Pleiadians. It sounds extraordinary, I know, but this is exactly how it happened. I was out walking in nature. Understanding The Concept of Multiple... - Collective Evolution.

Galactic History Vol I. Galactic History Vol I Pleaidians. Ancient Aliens In Australia: Pleiadian Origins Of Humanity  NineUs_NineDs.pdf. PLEIADIAN PROPHECY - The Great Changeover 2013 - 2027. Nikkie Gray: “What I Learned From Dolores Cannon’s Work & How It Changed My Life” The following is an article written by Nikkie Gray. I read it a few days ago via Consciousness-Evolution. As a practitioner of Dolores Cannon’s method of Quantum Healing Hypnosis Therapy, I would have to state that many, if not most of my clients sit down in the chair for their QHHT session appointment and repeat Nikkie’s statement that “Dolores Cannon Changed my Life.”

Nikkie and I had a brief exchange when I asked permission to reblog her article. Christine Day ~ THE PLEIADIAN STORY. Short Planetary History – Earth Invasions – Golden Ages – Therese Zumi Sumner – 5-23-14. Enra " pleiades ". Pleiadians - In The Beginning. “We Are Living In The Most Important Time In The History Of The Universe” Dolores Cannon Discusses Our Current Paradigm. Pleiades taken from home,NSW Australia, on phone app .. Jan 2015. Andromeda. Andromeda. Pauline Battell – Star Seed – Lightarian (TM) Rays Master-Practitioner – Reiki Kundalini Master-teacher – Spiritual Channeller – Lightworker. MESSAGES FROM THE REALMS OF LIGHT: FROM THE ANDROMEDAN GALAXY: LOVE UNITES ALL RACES AND CULTURES. When Two Suns Rise : Sirius and the Planetary New Year. Suzanne Lie ~ 1st link is Pleiadian Books, 2nd and subsequent links are her blogs from 2014 to early 2015.