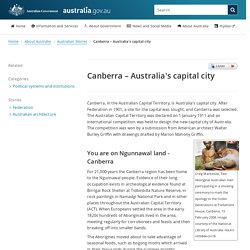 After Federation in 1901, a site for the capital was sought, and Canberra was selected. The Australian Capital Territory was declared on 1 January 1911 and an international competition was held to design the new capital city of Australia. The competition was won by a submission from American architect Walter Burley Griffin with drawings drafted by Marion Mahony Griffin. Craig Mackenzie, Two Aboriginal Australian men participating in a smoking ceremony to mark the Apology to the Stolen Generations at Parliament House, Canberra, 13 February 2008. Image courtesy of the National Library of Australia: nla.int-nl39844-cm18 You are on Ngunnawal land - Canberra For 21,000 years the Canberra region has been home to the Ngunnawal people. The Aborigines moved about to take advantage of seasonal foods, such as bogong moths which arrived in their thousands during the summer months.

Canberra, a good sheep station spoiled. Canberra - the Griffin vision in the 21st century. ABC. Canberra prepares to celebrate its centenary Australian Broadcasting Corporation Broadcast: 31/12/2012 Reporter: Chris Uhlmann The bush capital prepares to celebrate its centenary, with 2013 marking the hundredth anniversary of the laying of the foundation stone. 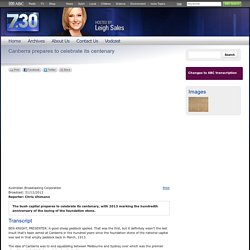 Transcript BEN KNIGHT, PRESENTER: A good sheep paddock spoiled. The idea of Canberra was to end squabbling between Melbourne and Sydney over which was the premier city, although it didn't do much to stop that either. The idea of the bush capital was written into the Constitution, so it's true to say that without Canberra there would be no Australia. CHRIS UHLMANN, REPORTER: The second half of the 19th Century was the age of exhibitions.

(male voiceover): Australia had federated peacefully at the stroke of a pen. DAVID HEADON, HISTORIAN: There were two parts of the agenda. CHRIS UHLMANN: Walter is only one half of the story. The capital's history is of dreams interrupted by wars, the Depression and indecision. Mahony Griffin, Marion Lucy - Woman - The Australian Women's Register. Born Marion Lucy Mahony in Chicago, Illinois in 1871, Marion Mahony was the second woman ever to graduate from the architectural program at the prestigious Massachusetts Institute of Technology. 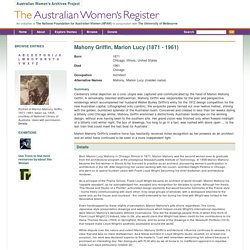 In 1898 Marion Mahony became the first woman in Illinois to be licensed to practice as an architect, pioneering women's participation in architecture in the US. After beginning her career working with her cousin, architect Dwight Perkins in Chicago, she went on to spend fourteen years with Frank Lloyd Wright, becoming his chief draftsman and architectural renderer. 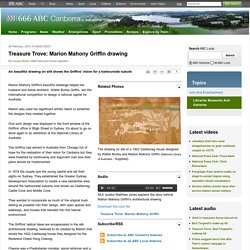 Marion also used her significant artistic talent to advertise the designs they created together. One such design was displayed in the front window of the Griffins' office in Bligh Street in Sydney. It's about to go on show again in an exhibition at the National Library of Australia. The Griffins had arrived in Australia from Chicago full of hope for the realisation of their vision for Canberra but they were thwarted by controversy and argument over how their plans should be implemented. In 1919 the couple quit the young capital and set their sights on Sydney. They wanted to incorporate as much of the original bush setting as possible into their design, with open spaces and walkways, and houses that blended into the natural environment.

Naturally beautiful. Walter Burley Griffin Society - Marion Mahony Griffin. Griffin resigned as Federal Capital Director of Design and Construction in 1920 and in 1921 they secured an option on 650 acres (263 hectares) in Castlecrag, Sydney. 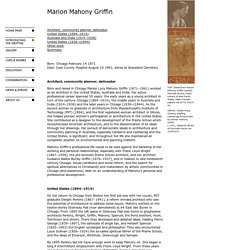 Griffin formed the Greater Sydney Development Association (GSDA) to purchase and develop the site as a model community. In 1935, through theosophical connections, Griffin was invited to India to design a library for Lucknow University. Marion Mahony followed in 1936 to help with this and other projects, which included residences, University buildings, a building for the Pioneer Press and the entire United Provinces Industrial & Agricultural Exhibition.