Aboriginal places of significance. Aboriginal people have lived in the area known as New South Wales for at least 45,000 years. 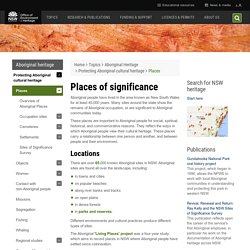 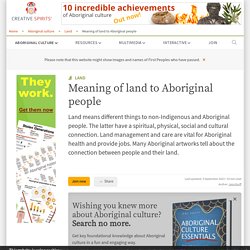 Non-Indigenous people and land owners might consider land as something they own, a commodity to be bought and sold, an asset to make profit from, but also a means to make a living off it or simply 'home' . They 'develop' land, as if it was unfinished or raw. For Aboriginal people the relationship is much deeper. Palyku woman Ambelin Kwaymullina explains: "For Aboriginal peoples, country is much more than a place.

They have a profound spiritual connection to land. The health of land and water is central to their culture. Key take-away: The land owns Aboriginal people and every aspect of their lives is connected to it. Living in a city has its own challenges. We cultivated our land, but in a way different from the white man. The Lost Girl The girl had lost her way. The girl wandered, alone. The people laughed and cried at once to see that the girl was safe. This story is available as a children's book of the same name. "The land owns us" Before Bed. Land Rights: 03/06/2014, Behind the News. Today is Mabo Day. 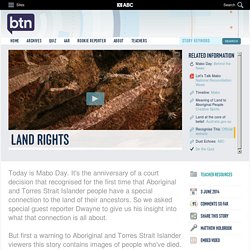 It's the anniversary of a court decision that recognised for the first time that Aboriginal and Torres Strait Islander people have a special connection to the land of their ancestors. So we asked special guest reporter Dwayne to give us his insight into what that connection is all about. But first a warning to Aboriginal and Torres Strait Islander viewers this story contains images of people who've died. DWAYNE COULTHARD: My name is Dwayne Coulthard. I'm an Adnyamathanha Kokatha person from South Australia. This land has always been important to us, but long ago life was very different. 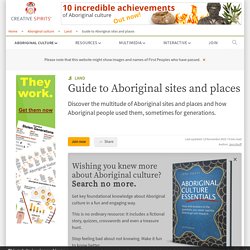 I have compiled guides for several significant Aboriginal places. 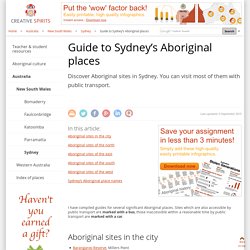 Sites which are also accessible by public transport are marked with a bus, those inaccessible within a reasonable time by public transport are marked with a car. Aboriginal sites in the city Barangaroo Reserve, Millers PointCahill Expressway interpretive display, Sydney CoveCyprus Hellene Club (Australian Hall), venue of the Day of MourningFirst flag (where the British flag was raised for the first time)Museum of Sydney, Bridge StreetOpera House, Bennelong PointRoyal Botanic Gardens (Cadi Jam Ora display)Sydney ObservatoryT2 Building at Taylor Square, Oxford Street, Darlinghurst, is a 1910 Commonwealth Bank building transformed by Aboriginal artist Reko Rennie who painted it in bright pink with geometric diamonds that reference his associations to Aboriginal North-Western NSW and the traditional markings of the Kamilaroi people. Grotto Point Aboriginal engraving site. Sydney Harbour National Park Overview. 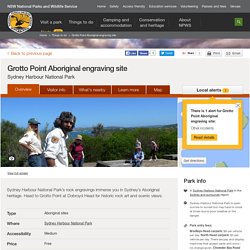 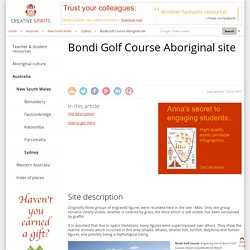 Only one group remains clearly visible. Another is covered by grass, the third which is still visible, has been vandalised by graffiti. It is assumed that due to space limitations many figures were superimposed over others. They show the marine animals which occurred in this area (sharks, whales, smaller fish, sunfish, dolphins) and human figures, one possibly being a mythological being. Australian Sacred Sites. Australian Sacred Sites Aboriginal sacred sites are areas or places in Australia of significant Aboriginal Australian meaning within the animist context of the localised indigenous belief system. 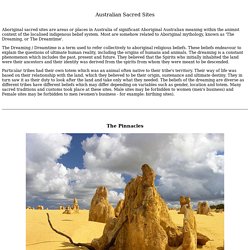 Most are somehow related to Aboriginal mythology, known as 'The Dreaming, or The Dreamtime'. The Dreaming / Dreamtime is a term used to refer collectively to aboriginal religious beliefs. These beliefs endeavour to explain the questions of ultimate human reality, including the origins of humans and animals. The dreaming is a constant phenomenon which includes the past, present and future. Particular tribes had their own totem which was an animal often native to their tribe's territory. The Pinnacles he Pinnacles are limestone formations contained within Nambung National Park, near the town of Cervantes, Western Australia. They were formed from lime leaching from the aeolian sand (wind-blown sand) and by rain cementing the lower levels of the dune into a soft limestone. Baiame Flinders Ranges Myth. Identifying Aboriginal Sites. The Sydney Basin is one of the richest provinces in Australia in terms of Aboriginal archaeological sites. 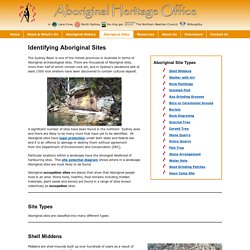 There are thousands of Aboriginal sites, more than half of which contain rock art, and in Sydney’s sandstone belt at least 1500 rock shelters have been discovered to contain cultural deposit. A significant number of sites have been found in the northern Sydney area and there are likely to be many more that have yet to be identified. All Aboriginal sites have legal protection under both state and federal law and it is an offence to damage or destroy them without agreement from the Department of Environment and Conservation (DEC).