Exercism.io. Out in the Open: The Site That Teaches You to Code Well Enough to Get a Job. Wanna be a programmer? 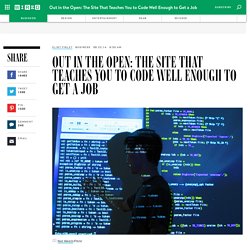 That shouldn’t be too hard. You can sign-up for an iterative online tutorial at a site like Codecademy or Treehouse. You can check yourself into a “coding bootcamp” for a face-to-face crash course in the ways of programming. Or you could do the old fashioned thing: buy a book or take a class at your local community college. But if want to be a serious programmer, that’s another matter. That’s where a site called Exercism.io is trying to help. It’s a simple idea. Click to Open Overlay Gallery Software developer Katrina Owen created Exercism.io while she was teaching programming at Jumpstart Labs in Denver, Colorado.

To solve the problem, she created a site last year that presents the practice problems and prevents students from being able to move on to the next ones without submitting a solution to the previous problem. Django framework. PyTexas 2015. Topic Modeling in Python. Wavelets/awesome-python. Jupyter and the future of IPython — IPython. Five Things Old Programmers Should Remember — # S W L H. Five Things Old Programmers Should Remember If you’ve been-there-done-that and you’re now building your dream home with your retirement fund, this post really isn’t for you. 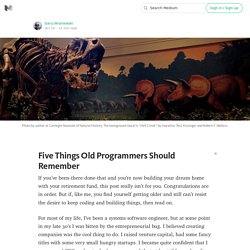 Congratulations are in order. But if, like me, you find yourself getting older and still can’t resist the desire to keep coding and building things, then read on. For most of my life, I’ve been a systems software engineer, but at some point in my late 30's I was bitten by the entrepreneurial bug. I believed creating companies was the cool thing to do. I resigned myself to the idea that my best efforts were in the past. My negative thinking was reinforced by what I saw. Then one night, we were watching a corny old Star Trek movie, and James T. If I may be so bold, it was a mistake for you to accept promotion. I zoned-out for the rest of the movie. Luckily for me I soon realized the answer was “Yes”. 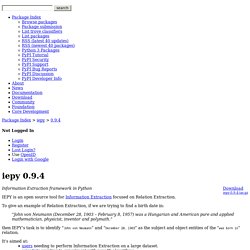 To give an example of Relation Extraction, if we are trying to find a birth date in: “John von Neumann (December 28, 1903 – February 8, 1957) was a Hungarian and American pure and applied mathematician, physicist, inventor and polymath.” then IEPY’s task is to identify “John von Neumann” and “December 28, 1903” as the subject and object entities of the “was born in” relation. It’s aimed at: Quickstart — Requests 2.8.1 documentation. Eager to get started? 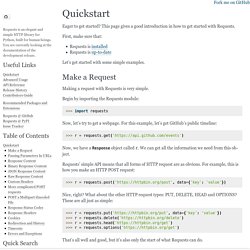 This page gives a good introduction in how to get started with Requests. This assumes you already have Requests installed. If you do not, head over to the Installation section. First, make sure that: Requests is installedRequests is up-to-date. A Fast and Powerful Scraping and Web Crawling Framework. Using Scrapy on reddit.com. Matplotlib: python plotting — Matplotlib 1.5.0 documentation. Book. Natural Language Processing with Python – Analyzing Text with the Natural Language Toolkit Steven Bird, Ewan Klein, and Edward Loper This version of the NLTK book is updated for Python 3 and NLTK 3. 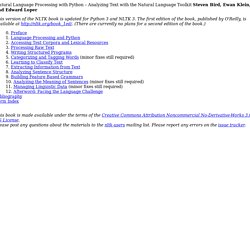 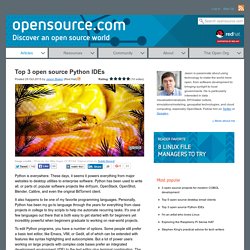 These days, it seems it powers everything from major websites to desktop utilities to enterprise software. Python has been used to write all, or parts of, popular software projects like dnf/yum, OpenStack, OpenShot, Blender, Calibre, and even the original BitTorrent client. It also happens to be one of my favorite programming languages. Personally, Python has been my go-to language through the years for everything from class projects in college to tiny scripts to help me automate recurring tasks. It's one of few languages out there that is both easy to get started with for beginners yet incredibly powerful when beginners graduate to working on real-world projects. To edit Python programs, you have a number of options.

Let's look at some of the most popular options available to Python developers and see how they stack up. Eclipse with PyDev PyDev adds a huge number of features to Eclipse, far beyond simple code highlighting. Eric PyCharm Other great options.