Electromagnetic hypersensitivity: a systematic review of provocation studies - PubMed. Objectives: The objectives of this study were to assess whether people who report hypersensitivity to weak electromagnetic fields (EMFs) are better at detecting EMF under blind or double-blind conditions than nonhypersensitive individuals, and to test whether they respond to the presence of EMF with increased symptom reporting. 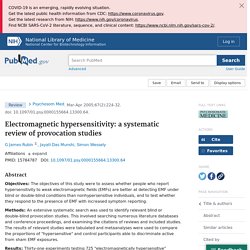 Methods: An extensive systematic search was used to identify relevant blind or double-blind provocation studies. This involved searching numerous literature databases and conference proceedings, and examining the citations of reviews and included studies. Reading Room » Myths about Electromagnetic Hypersensitivity and Multiple Chemical Sensitivity. As if we didn’t have enough things to worry about already, now we are being told to fear our toasters. 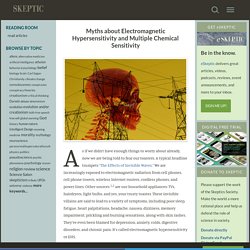 A typical headline trumpets “The Effects of Invisible Waves.” We are increasingly exposed to electromagnetic radiation from cell phones, cell phone towers, wireless Internet routers, cordless phones, and power lines. “Electromagnetic hypersensitivity” and “wifi allergies”: Bogus diagnoses with tragic real world consequences. Is there such a thing as an “allergy to wifi”? 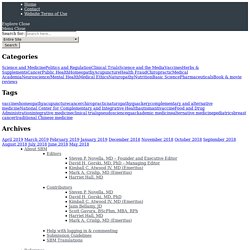 Lots of people claim there is; science, not so much. I debated about writing about this topic, given that I just wrote about it last week on my not-so-super-secret other blog. However, as I thought about it during the weekend, I realized that the tragic story that so saddened and disturbed me to prod me to discuss so-called “electromagnetic hypersensitivity” or “electro-hypersensitivity” (EHS) was so horrific that a more detailed, SBM-level discussion was indicated, particularly in light of a similar case electromagnetic hypersensitivity that didn’t end so tragically discussed by Harriet Hall in September. The psychology behind why people think 5G makes them sick. Does Mobile Phone Radiation Cause Symptoms? 1. 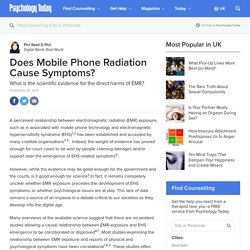 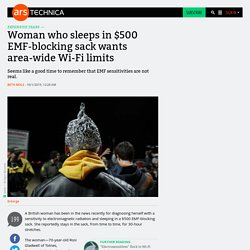 She reportedly stays in the sack, from time to time, for 30-hour stretches. Tin foil wrapped around BC Hydro meter to prevent pain. A B.C. woman can’t prove her smart electrical meter is causing “many, very serious, symptoms she describes” and would have a problem proving BC Hydro discriminating against her by installing one at her house, B.C.’s Human Rights Tribunal has ruled. 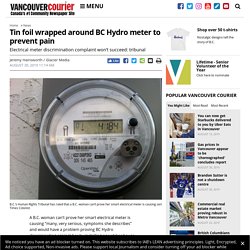 Mary Roadhouse said she has electromagnetic sensitivity triggered by radiation emitted by the smart meter BC Hydro installed at her residence. Afflicted and the Tragedy of Fake Illnesses. [Editor’s note: With Jann getting, like, the last 3 Thanksgiving’s off, Dr. 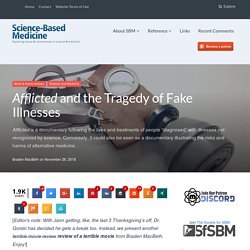 Gorski has decided he gets a break too. Instead, we present another terrible movie review review of a terrible movie from Braden MacBeth. Enjoy!] Netflix released the documentary series Afflicted on August 10th of this year. Afflicted follows 7 people with “controversial” chronic illnesses as they try to find a treatment for their condition. Household electromagnetic radiation doesn't make you ill or give you cancer. Here's why. There are few phenomena as ubiquitous or vital to human existence as electromagnetic radiation (EMR). 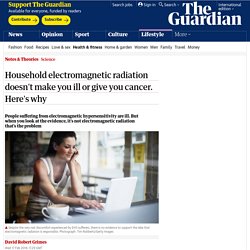 It permeates everything we experience, be it the visible light illuminating all we see, or the broadcast media transmitted across the globe by radio-wave. Can you be allergic to your Wi-Fi? Is Wi-Fi a Health Threat in Schools? Sorting fact from fiction. Since the early 2000s, when wireless connectivity and the Internet evolved into everyday technologies, they have come to pervade our home and work lives, revolutionizing the way we share and access information. 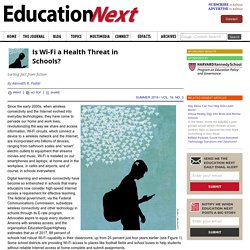 Wi-Fi circuits, which connect a device to a wireless network and the Internet, are incorporated into billions of devices, ranging from bathroom scales and “smart” electric outlets to equipment that streams movies and music. Wi-Fi is installed on our smartphones and laptops, at home and in the workplace, in cafés and airports, and of course, in schools everywhere. Digital learning and wireless connectivity have become so entrenched in schools that many educators now consider high-speed Internet access a requirement for effective teaching. The federal government, via the Federal Communications Commission, subsidizes wireless connectivity and other technology in schools through its E-rate program.

The Science behind RF Energy Exposure in Schools Research on Health Effects. Electromagnetic Hypersensitivity: Real or Imagined? You've seen them on the TV news and on the Internet: Thousands of people worldwide, though mostly concentrated in the United Kingdom and Sweden, who believe that their bodies are being afflicted by the electromagnetic radiation put out by computers, wireless data networks, cell phone networks, radio and television broadcasting, power lines, and virtually anything that uses electricity. 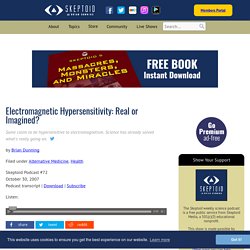 Mass media trumpet the alarmist headlines, like one article that proclaims "For years, opponents of cell towers and wireless technology have voiced concerns about potential health effects of electromagnetic fields. Once ridiculed as crackpots, they're starting to get backup from the scientific community. " Generally called electrosensitivity or ES for short, the condition manifests itself in sufferers as skin sensitivity and blemishing, light sensitivity, fatigue, high blood pressure, headaches, joint pain, dizziness, and a whole array of associated symptoms.

By Brian Dunning. No proof B.C. boy's migraines caused by Wi-Fi, tribunal rules. By the time class let out for the summer in 2016, a Vancouver Island preteen was spending almost all of every school day alone in an empty room, away from his friends. The arrangement left the Grade 6 student feeling "upset, frustrated and angry," his grandmother told the B.C. Human Rights Tribunal.

But the reason the boy was isolated was that his mother and grandmother insisted he needed to be kept away from the electromagnetic fields (EMFs) generated by Wi-Fi, cellphones and other electronics. Last week, the tribunal dismissed the family's complaint against the Saanich School District, saying there was no proof that EMFs caused the boy's migraines, nausea, insomnia and night terrors. The family had called for 25 per cent of the boy's middle school to be designated as Wi-Fi free.

The "Electrosensitive" Brain - Neuroskeptic. A strange new paper reports “abnormal” brain activity in 10 patients with electrohypersensitivity (EHS) – a controversial condition allegedly triggered by electromagnetic fields from devices such as phones and power-lines. But the methods used in this study were very odd. According to the authors, Gunnar Heuser and Sylvia A. Heuser, the ten patients all suffered from symptoms such as Headaches, impairment of cognitive function, tremors, weakness, and others. Multi-system complaints were triggered by exposure to cell phones, cell phone towers, smart meters, wi-fi, and other sources To investigate a possible brain basis of the EHS, the patients had resting state fMRI scanning.

The images in the paper appear to show the functional connectivity of the default mode network (DMN) for each patient. IEI-EMF provocation case studies: A novel approach to testing sensitive individuals - Verrender - 2017 - Bioelectromagnetics. Nonsense about the Health Effects of Electromagnetic Radiation. Compteurs intelligents et radiofréquences Archives. Are media warnings about the adverse health effects of modern life self-fulfilling? An experimental study on idiopathic environmental intolerance attributed to electromagnetic fields (IEI-EMF) - Journal of Psychosomatic Research. Investigation of Anti-WiFi Activism in Canada COMPLETE. Project Complete This project ended in December and the committee has produced a comprehensive analysis of the claims made by the Anti-Wifi activists in Canada. They also uncovered some disturbing conflicts of interest with activists in the movement.

Please click on the link below to read the full report: BSW Anti-WiFi 2012 Position Paper UPDATED Jan 27 2013 Bad Science Watch would like to thank the dedicated members of the committee for all of their hard work on this project. IEI-EMF. Idiopathic environmental intolerance attributed to electromagnetic fields (formerly 'electromagnetic hypersensitivity'): An updated systematic review... - PubMed - NCBI. Electromagnetic Hypersensitivity (EHS): Fad Allergy, Debilitating Disease, or What? Less than 1% of the population suffers from the serious gluten allergy known as celiac disease. “Electromagnetic hypersensitivity” and “wifi allergies”: Bogus diagnoses with tragic real world consequences. Massive revelation in iBurst tower battle. Over the past few months a battle between certain concerned Craigavon residents and iBurst reached fever pitch, with residents demanding that iBurst move a tower that was erected in Fourways Memorial Park on 12 August 2009.

A ‘Craigavon Task Force’ was established shortly after the erection of the tower, partly because some residents in the area complained about ailments which they attributed to the tower. They staged a protest a few weeks after the tower went live, handing out flyers with the message: “iBurst subjects a residential community filled with children to uninvited microwaves from their tower”. In an email one Craigavon Task Force member, Tracey-Lee Dorny, describes the affected community’s symptoms: “several rash cases were presented in person and by photos from people who could not attend [a meeting with iBurst]. Research fails to detect short-term harm from mobile phone masts. Mobile phone masts do not cause harmful short-term health effects, according to a study of people who say they experience symptoms when they are close to them.

The study deals another blow to the notion that low-level electromagnetic fields from cellphones or base stations are dangerous. The researchers looked at 2G and 3G phone masts in a lab setting where both the participants and researchers did not know whether the equipment was turned on. Gizmodo. Are ‘WiFi allergies’ a real thing? A quick guide to electromagnetic hypersensitivity. Electromagnetic Fields & Parental Panics: A case study in how science can bring comfort.