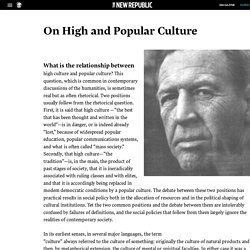 There are evident and important differences of degree of access and use, but these are contingent social and historical relationships. In certain societies, of the past and still in some cases of the present, there are distinguishable cultural situations: for example, court and peasant cultures, aristocratic and folk cultures, metropolitan-imperial and native-colonial cultures. Often the separated cultures will have evident differences of degree of access to a more universal high culture, but none of them can be identified with high culture as such, and increasingly, as societies develop, there is influential interaction between previously separated spheres.

This brings us to the most crucial distinction between different senses of “popular” culture. When the Truth Hurts, Tell a Joke: Why America Needs Its Comedians by Roger Cohen, Ryan Richards. “Humor is a rubber sword – it allows you to make a point without drawing blood.” 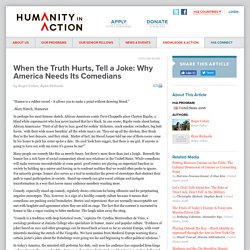 -Mary Hirsch, Humorist In perhaps his most famous sketch, African-American comic Dave Chappelle plays Clayton Bigsby, a blind white supremacist who has never learned that he’s black. In one scene, Bigsby rants about hating African Americans: “First of all they’re lazy, good for nothin’ tricksters, crack smokin’ swindlers, big butt havin,’ with their wide noses breathin’ all the white man’s air. They eat up all the chicken, they think they’re the best dancers, and they stink. Matter of fact, my friend Jasper told me one of them coons came by his house to pick his sister up for a date. Many people see comedy like this as merely funny, but there’s more there than just a laugh. Comedy, especially stand-up comedy, regularly draws criticism for being offensive and for perpetuating negative stereotypes. “Comedy is a tradition with deep historical roots,” explains Dr.

Pedophilia and Other Taboo Subjects -Dr.

Why the digital era is destined to fail us. I realise everyone’s desperate for good news these days, but even so, there was something startling about the elation that greeted reports of the relaunch of the Nokia 3310 phone. 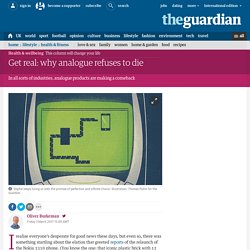 (You know the one: that iconic plastic brick with 12 pressable buttons, and a screen you couldn’t crack.) Partly, no doubt, this was simple nostalgia. But it was also because the 3310 “just worked”. You hear that phrase so often these days, in praise of some old-fashioned bit of tech, that it’s easy to forget how strange it is: why would there ever be a market for gadgets that didn’t just work?

Yet many don’t. The 3310, being digital, has no place in David Sax’s new book, The Revenge Of Analog: Real Things And Why They Matter. Analogue, in short, demands that you make a decision – to read this one book, write this sentence, take this photo – while digital keeps luring us on with the promise of perfection and infinite choice. Oliver.burkeman@theguardian.com. 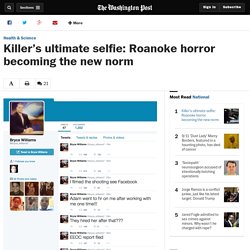 After murdering two former colleagues during a live TV news stand-up, the Roanoke killer uploaded a horrifying message to his Twitter account: “I filmed the shooting see Facebook.” So now there were two awful videos — the live stand-up filmed by the videographer, and the killer’s even more gruesome amateur version apparently taken with his phone. This instantly took over the news feeds of the world. If you were anywhere near the Internet you wound up experiencing this crime.

You couldn’t escape it. You may have realized the story had taken another terrible turn by the cries of co-workers saying “Oh my god.” Social media didn’t cause this crime. That technology has become radically democratized in just the last few years. There are fewer filters — or none at all. “In the old days, you imagine Bonnie and Clyde getting excited when they made the papers.