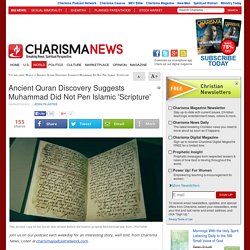 Listen at charismapodcastnetwork.com. A recent discovery of the world's oldest Quran has "startling" implications for Islam. The fragments of the text were tested for age, revealing the words of Islam are at least 1,370 years old, according to The British Broadcasting Corporation. More specifically, though, experts believe the text was written between A.D 568-645. "They could well take us back to within a few years of the actual founding of Islam," David Thomas tells BBC. 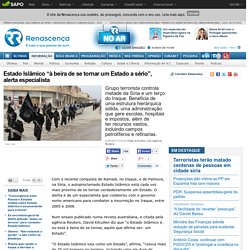 O alerta é de um especialista que colaborou com o governo norte-americano para combater a insurreição no Iraque, entre 2005 e 2008. Islamic State, ISIS or ISIL: Why it doesn't matter what you call the brutal al-Qaeda offshoot which now boasts more than 80,000 jihadists. World leaders and news organisations are using three different names to reference the terror group which is essentially one movementCounter-terrorism expert Dr Anne Aly says the Islamic State group is spot on with its branding because it comes across as a 'well organised army'The group changed its name to 'Islamic State' in June after declaring a caliphate - an Islamic state led by a supreme religious and political leader By Sarah Dean for Daily Mail Australia Published: 03:16 GMT, 28 August 2014 | Updated: 07:43 GMT, 28 August 2014 They are the brutal terrorist organisation that claims religious authority over Muslims across the world. 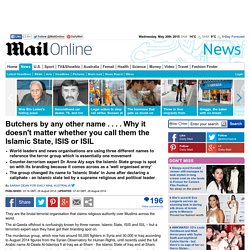 The al-Qaeda offshoot is confusingly known by three names: Islamic State, ISIS and ISIL – but a terrorism expert says they have got their branding spot on. In June, the terror group declared a caliphate - an Islamic state led by a supreme religious and political leader - and began using the simplified name 'Islamic State'. Yemen: At time of mosque bombing, worshippers were chanting “death to America”

In full, they were screaming, “Death to America. 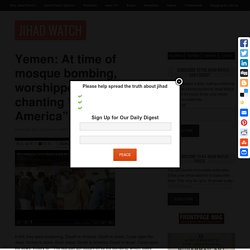 Death to Israel. Curse upon the Jews. Victory to Islam. Allah Akbar. Death to America. What ISIS Really Wants. What is the Islamic State?

Obama’s Comparison of Islamic Terrorism to the Crusades Receiving Heavy Backlash. In response to Barack Obama’s recent comments asserting that Christians are just as guilty for violence committed in the name of Christ as Muslims are for committing terrorism in the name of Mohammad, a number of prominent leaders are speaking out against the president’s remarks as being an improper comparison. 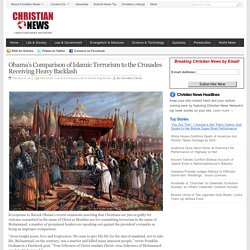 “Jesus taught peace, love and forgiveness. He came to give His life for the sins of mankind, not to take life. Mohammad, on the contrary, was a warrior and killed many innocent people,” wrote Franklin Graham in a Facebook post. “True followers of Christ emulate Christ—true followers of Mohammed emulate Mohammed.” As previously reported, during the National Prayer Breakfast held in Washington on Thursday, Barack Obama spoke against violence committed in the name of religion, and stated that Christians have been just as guilty as Muslims and other terror groups of this crime.

“It’s not unique to one group or one religion,” he said. Bishop E.W. Charlie Hebdo and Islam: What that radical cleric in USA Today gets wrong about blasphemy in the Muslim faith. Photo by David McNew/Getty Images In the wake of the attack on Charlie Hebdo’s offices in Paris, much has been made of the sometimes violent responses of extremists to the publication of cartoons depicting the Prophet Mohammed. 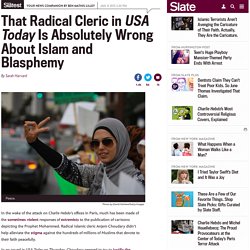 Radical Islamic cleric Anjem Choudary didn’t help alleviate the stigma against the hundreds of millions of Muslims that devote to their faith peacefully. Ben Affleck Curses Jesus While Defending Islam. Ben Affleck seems so amiable in his movies. 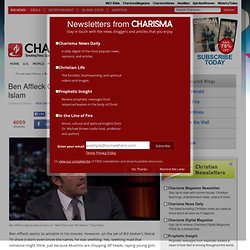 Obama: I Stand With Muslims. In his book The Audacity of Hope, Barack Obama stated of Muslim Americans, "I will stand with them should the political winds shift in an ugly direction. 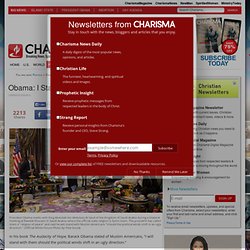 " With Islam now at open war with the West, the winds have, indeed, shifted, and Obama's pledge is being tested. Stunningly, despite multiple beheadings of civilians by Islamic terrorists, the murder this summer of a 19-year-old New Jersey man by an Islamic jihadist, and the beheading in Oklahoma just last week of a woman by a man who purportedly was trying to convert co-workers to Islam, the president still refuses to call Islam anything other than a religion of peace. WATCH: Who Is ISIS Really? Below is a special video I want you to watch. 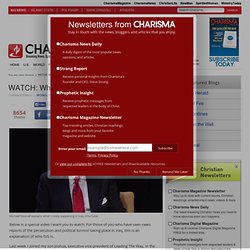 For those of you who have seen news reports of the persecution and political turmoil taking place in Iraq, this is an explanation of who ISIS is.