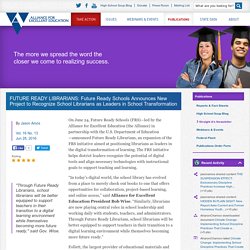 Department of Education—announced Future Ready Librarians, an expansion of the FRS initiative aimed at positioning librarians as leaders in the digital transformation of learning. The FRS initiative helps district leaders recognize the potential of digital tools and align necessary technologies with instructional goals to support teaching and learning. “In today’s digital world, the school library has evolved from a place to merely check out books to one that offers opportunities for collaboration, project-based learning, and online access,” said Alliance for Excellent Education President Bob Wise.

“Similarly, librarians are now playing central roles in school leadership and working daily with students, teachers, and administrators. Library ethics for non-librarians - Statement I. ALA Library Code of Ethics Statement I: We provide the highest level of service to all library users through appropriate and usefully organized resources; equitable service policies; equitable access; and accurate, unbiased, and courteous responses to all requests. 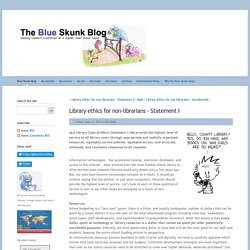 Information technologies – the automated catalog, electronic databases, and access to the Internet – have allowed even the most humble school library to offer services even research libraries could only dream only a few years ago. But, our jobs have become increasingly complex as a result. It should go without saying that the ethical, or just plain competent, librarian should provide the highest level of service. Let’s look at each of these qualities of service in turn to see what issues are emerging as a result of new technologies. It is ethically irresponsible not to have a budget.

Examine the existing consequences for other similar improper activities. 1. Library ethics for non-librarians - Statement II. I find almost everything that Mr. 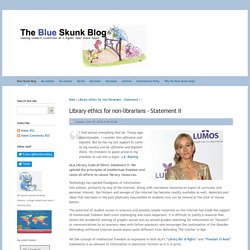 Trump says objectionable. I consider him offensive and bigoted. But he has my full support to come to my country and be offensive and bigoted there. His freedom to speak protects my freedom to call him a bigot. A Framework for Technology Integration: One School’s Approach. An Act of Justice. Conversations Instead of Grades. At the start of this year, I wrote a blog titled “Grading for Mastery and Redesigning My Gradebook,” which detailed my desire to rethink assessment in my classroom. 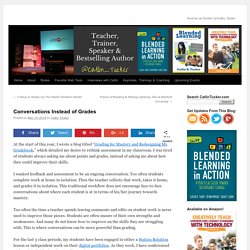 I was tired of students always asking me about points and grades, instead of asking me about how they could improve their skills. Curation, Revisited: Aggregating Resources in 2016. Presented by Michelle Luhtala, Head Librarian, New Canaan High School, CT Within 24 hours after the live event, a CE certificate is emailed to live attendees who logged in online with their email address. 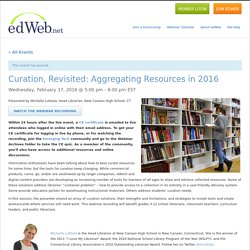 To get your CE certificate for logging in live by phone, or for watching the recording, join the Emerging Tech community and go to the Webinar Archives folder to take the CE quiz. As a member of the community, you’ll also have access to additional resources and online discussions. Information enthusiasts have been talking about how to best curate resources for some time, but the tools for curation keep changing.

While commercial products, come, go, and/or are swallowed up by larger companies, edtech and digital content providers are developing an increasing number of tools for learners of all ages to store and retrieve collected resources. Michelle Luhtala is the Head Librarian at New Canaan High School in New Canaan, Connecticut. The Internet Really Has Changed Everything. Here’s the Proof. — Backchannel. Netflix and Ch-Ch-Chilly How have decades of mass media and technology changed us? 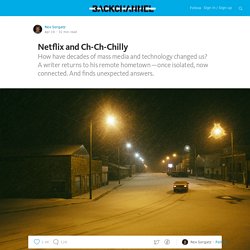 A writer returns to his remote hometown — once isolated, now connected. And finds unexpected answers. “Certain things, they should stay the way they are. PBS LearningMedia Introduces New Curriculum-based iBooks. PBS LearningMedia has released a new series of iBooks for K-8 teachers. 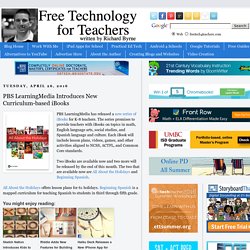 The series promises to provide teachers with iBooks on topics in math, English language arts, social studies, and Spanish language and culture. Each iBook will include lesson plans, videos, games, and other activities aligned to NCSS, ACTFL, and Common Core standards. Two iBooks are available now and two more will be released by the end of this month. Using Research to Promote Literacy and Reading in Libraries: Guidelines for Librarians. 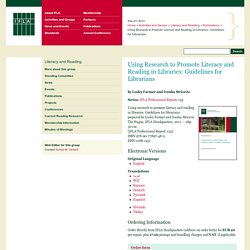 Internet Filtering at Schools Is Problematic. Giving all children access to the Internet and computing became a rallying cry for educators and elected leaders in the 1990s. 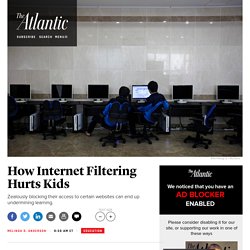 In March 1996, President Clinton and Vice President Gore led 20,000 volunteers in a one-day effort to connect thousands of California public schools to the “brave new world of mouse clicking and web surfing.” Yet that brave new world remains unconquered for many students and schools, especially in rural and high-poverty communities. Some have coined the term “digital redlining” to describe how advanced technology has been deliberately denied from certain areas based on geography as well as the race, ethnicity, and income of residents.

In the intervening years, the spotlight has pivoted to the so-called “connectivity gap”—which hurts schools without high-speed Internet connections—and the homework gap—which hurts students unable to access wireless and broadband connections from home. State of America's Libraries Report 2016. Academic, school, and public libraries continue to face an uncertain economy as they shift resources and services to meet the needs of the 21st-century digital world. 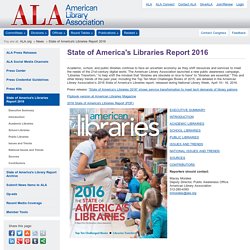 The American Library Association launched a new public awareness campaign, “Libraries Transform,” to help shift the mindset that “libraries are obsolete or nice to have” to “libraries are essential.” This and other library trends of the past year, including the Top Ten Most Challenges Books of 2015, are detailed in the American Library Association’s 2016 State of America’s Libraries report, released during National Library Week, April 10– 16, 2016. Press release: “State of America’s Libraries 2016” shows service transformation to meet tech demands of library patrons Flipbook version at American Libraries Magazine. Library Impact Studies. Why We Are Moving on from AR. This post was written with Brandon Blom (@brandonkblom, you can check out his blog here). Brandon and I are both elementary school principals in the Roseville City School District.

Before being principals, Brandon was a middle school math teacher, and I was an elementary school teacher and then a middle school ELA/History teacher. Both of us are passionate and avid readers. What has Accelerated Reader (AR) been used for in the past at our schools? A New Way to Share Our Stories. Indeed, school libraries transform. We know our students’ stories, and we know the transformative nature of our work. But do we articulate these stories enough? And to the right people? How can we use data to showcase the real effort behind that transformation? In honor of School Library Month, the Office for Library Advocacy has teamed up with AASL to create a School Library Snapshot tool.

#GoOpen States. Why #GoOpen? Openly licensed educational resources have enormous potential to increase access to high-quality education opportunities in the United States. Situational librarianship. Situational ethics ... takes into account the particular context of an act when evaluating it ethically, rather than judging it according to absolute moral standards. WikipediaSituational librarianship takes into account the particular needs and goals and philosophies of the library's parent institution when determining programming, resources, and staffing rather than evaluating by professional association standards.

Blue Skunk Blog Scholastic vice-president (and long-time friend), Evan St Lifer visited with Saint Paul Public Schools' librarians last week. He gave an excellent presentation on "The Habits of Highly IMPACTFUL Librarian. " Smashing Adobe. ON LIBRARIES: From Library to Learning Commons – Hilda K. Weisburg. You have heard the term Learning Commons. 21st-Century Libraries: The Learning Commons. Libraries have existed since approximately 2600 BCE as an archive of recorded knowledge. From tablets and scrolls to bound books, they have cataloged resources and served as a locus of knowledge. Today, with the digitization of content and the ubiquity of the internet, information is no longer confined to printed materials accessible only in a single, physical location.

Consider this: Project Gutenberg and its affiliates make over 100,000 public domain works available digitally, and Google has scanned over 30 million books through its library project. Libraries are reinventing themselves as content becomes more accessible online and their role becomes less about housing tomes and more about connecting learners and constructing knowledge. Cushing Academy in Ashburnham, Massachusetts has been in the vanguard of this transition since 2009, when it announced its plans for a "bookless" library.

A belated confession. Education Week. The SAMR Model Explained By Students. School Libraries Transform. 5 Minute Librarian: Does Your Library Transform Lives? SC Study Shows Link Between School Librarians and Higher Test Scores. The members of the South Carolina Association of School Librarians (SCASL) have always known how important school librarians and library programs are to student achievement in their state; however, they needed a way to prove it to administrators, teachers, parents, and legislators who were yet to be convinced. To develop their case, in 2013, the SCASL board commissioned a study conducted by Keith Curry Lance, consulting with RSL Research Group president Marcia J. Year of the Library Learning Commons. New Padagogy Wheel Helps You Integrate Technology.

6 Active Learning Spaces Your Library Should Have. Inquiry-Based Learning: From Teacher-Guided to Student-Driven. The National Education Technology Plan 2016. Explore School Library and University Partnerships in Nov/Dec 2015 Issue. Collaboratories and bubbles of shush – how libraries are transforming. Libraries matter: 15 fantastic library infographics. Markers of Quality: The Role of Librarians in Everyday Life Information Literacy. What PBL Can Do For Your School. Librarians Point the Way on Digital Learning. Libraries and the American Dream.

The Five Tenets of Personalized Learning.