When ‘Open’ Isn’t Open: Understanding Copyright and Permissions for OER. The Internet has millions of learning resources online, many of them free. 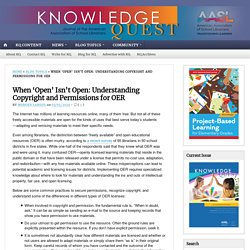 But not all of these freely accessible materials are open for the kinds of uses that best serve today’s students—adapting and remixing materials to meet their specific needs. Even among librarians, the distinction between “freely available” and open educational resources (OER) is often murky, according to a recent survey of 95 librarians in 50 school districts in five states. Unite for Literacy. School Library History. Resources for School Librarians - Index General School Library History Magic Casements - A survey of school library history from the eighth to the twentieth century. 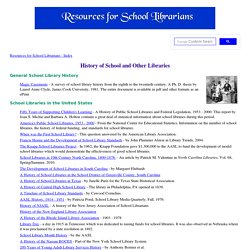 A Ph. D. thesis by Laurel Anne Clyde, James Cook University, 1981. Knapp School Libraries Project. In 1962, the Knapp Foundation, Inc., provided a $1,130,000 grant administered to the American Association of School Librarians (AASL), a division of ALA, to raise the standards of school libraries. 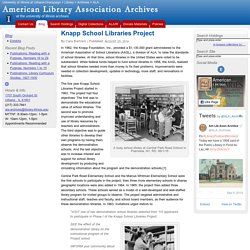 At that time, school libraries in the United States were noted to be substandard. While federal funds helped to fund school libraries in 1958, the AASL realized that school libraries needed more than money to fix their problems. Ideas. Learning Why, Not How. I agree with Jenny Young that emphasizing correct citation in composition courses is not helping students learn why and how to use other people’s ideas effectively in writing. 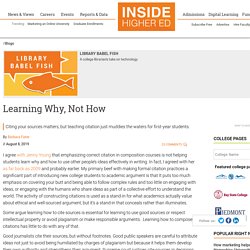 In fact, I agreed with her as far back as 2009 and probably earlier. Real Media Literacy: Spotting a Fake News Story. In 2019, the prevalence of fake news and disinformation online is causing many educators to rethink how they teach critical thinking skills to students. 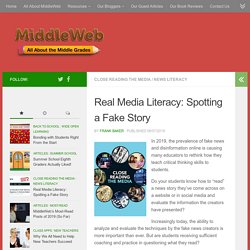 Do your students know how to “read” a news story they’ve come across on a website or in social media and evaluate the information the creators have presented? Increasingly today, the ability to analyze and evaluate the techniques by the fake news creators is more important than ever. But are students receiving sufficient coaching and practice in questioning what they read?

Reading Laterally Experts are now recommending that students read laterally, as opposed to vertically. Home. Hs2xhbfskr. Sketchnoting and Why It's Important. The What and Why Back in 2006, a man named Michael Rohde had the idea to harness the power of doodling and use it to create more memorable notes. 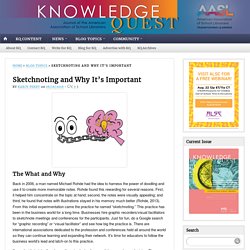 Rohde found this rewarding for several reasons. First, it helped him concentrate on the topic at hand; second, the notes were visually appealing; and third, he found that notes with illustrations stayed in his memory much better (Rohde, 2013). From this initial experimentation came the practice he named “sketchnoting.” What Hath We Wrought? Movie Viewing and Streaming Rights – Teen Services Underground. Have you shown a movie at your library for a program? 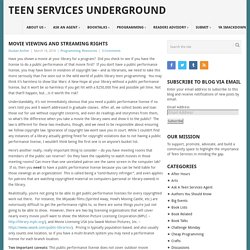 Did you check to see if you have the license to do a public performance of that movie first? If you don’t have a public performance license, you may have been in violation of copyright law – and as librarians, we need to take this more seriously than I’ve seen out in the wild world of public library teen programming. You may think it’s harmless to show Star Wars: A New Hope at your library without a public performance license, but it won’t be so harmless if you get hit with a $250,000 fine and possible jail time. Not that that’ll happen, but…is it worth the risk? Attributions - *Butler LibGuides: Standards & Best Practices - LibGuides at Butler University. When you add a Gallery box, you are not able to add text beneath your image. 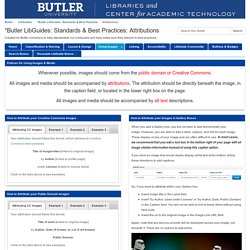 However, you are able to add a label, caption, and link for each image. These display on top of your image and are often difficult to see. In most cases, we recommend that you add a text box in the bottom right of your page with all image citation information instead of using this caption option. If you have an image that would clearly display white text at the bottom, follow these directions to add captions: 173 369 1 SM. MSLA Forum Newsletter - Massachusetts School Library Association. Plain Text Editor - Knowlege Quest Blog. Formatting issues can make a simple website project take a long time to complete. 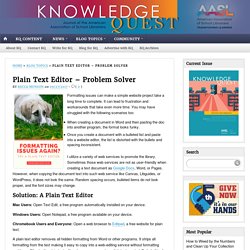 It can lead to frustration and workarounds that take even more time. You may have struggled with the following scenarios too: When creating a document in Word and then pasting the doc into another program, the format looks funky.Once you create a document with a bulleted list and paste into a website editor, the list is distorted with the bullets and spacing inconsistent. I utilize a variety of web services to promote the library. Sometimes those web services are not as user-friendly when creating a text document as Google Docs, Word, or Pages. Solution: A Plain Text Editor Mac Users: Open Text Edit, a free program automatically installed on your device. Windows Users: Open Notepad, a free program available on your device.

How to Weed by the Numbers and Clean Up Your Collection. I love weeding. 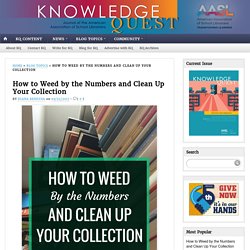 A well-curated library collection makes me happy. But weeding can be difficult. We attach a lot of emotion to books. Others don’t understand why anyone would ever want to get rid of books. We have to hide our weeded books for fear of misunderstanding from teachers, parents, students, and administrators. Data Is Your Friend. Open Educational Resources. As more schools across the nation use open educational resources (OERs), school librarians find that their roles as digital content curators are expanding or even being redefined.

A natural fit “Librarians, by nature, curate resources,” says Jennifer Scotten, library media specialist at South Middle School in Lawrence, Kansas. Those curation abilities make librarians invaluable for implementing OERs, which can be overwhelming for first-time users browsing a seemingly endless catalog of online resources. For Kelly Hart, a 7th-grade English and language arts teacher at the school, Scotten’s expertise enabled her to exclusively use OERs for the 2016–2017 school year. “I couldn’t have done it without her,” Hart says. Collection Development with the Help from Second Grade. A second-grade student brought a problem to my attention. He explained that the library collection has only 1 or 2 copies of books on topics that children want to read. He illustrated his point with a poster.

It was a portrayal of a boy looking for robot books that were nowhere to be found. We decided to ask all second-grade students to help solve the problem by searching for a topic of interest using the library catalog and determining if there were enough books for them to read. We started with a lesson on reading the results of a catalog search. Lesson: Reading Catalog Search Results Materials. Library Privacy Checklist for Students in K-12 Schools. This checklist is intended to help libraries of all capacities take practical steps to implement the principles that are laid out in the Library Privacy Guidelines for Students in K-12 Schools. Priority 1 are actions that hopefully all libraries can take to improve privacy practices. Priority 2 and Priority 3 actions may be more difficult for libraries to implement depending on their technical expertise, available resources, and organizational structure.

Priority 1 Actions Create internal library procedures to protect student privacy based on: school policies related to privacy and confidentiality of student data, especially student circulation records and the use of library resources in all formats. federal laws such as the Family Educational Rights and Privacy Act (FERPA), Children’s Online Privacy Protection Act (COPPA), and state privacy laws regarding library records.

Priority 2 Actions. Ranganathan on shyness: Get over it! - OCLC Next. Advice from the father of library science In 1931, S.R. Ranganathan, a mathematician and librarian who is widely regarded as a founder of modern library science, published his seminal work, The Five Laws of Library Science. Internet Filtering at Schools Is Problematic. Giving all children access to the Internet and computing became a rallying cry for educators and elected leaders in the 1990s. In March 1996, President Clinton and Vice President Gore led 20,000 volunteers in a one-day effort to connect thousands of California public schools to the “brave new world of mouse clicking and web surfing.”

Yet that brave new world remains unconquered for many students and schools, especially in rural and high-poverty communities. Some have coined the term “digital redlining” to describe how advanced technology has been deliberately denied from certain areas based on geography as well as the race, ethnicity, and income of residents. In the intervening years, the spotlight has pivoted to the so-called “connectivity gap”—which hurts schools without high-speed Internet connections—and the homework gap—which hurts students unable to access wireless and broadband connections from home.

This finding is confirmed by anecdotal and empirical evidence. A Copyright-Friendly Toolkit. However fabulous Creative Commons and Public Domain content may be, sometimes you really need to use copyrighted material. Say you plan to comment on popular media or current events. NSTeens.org - Making Safer Choices Online. Critical Evaluation.

Infographic: Get More Out Of Google. Web Evaluation: Does This Website Smell Funny to You? One of my friends spent this past weekend working with her 2nd grade daughter on a research project. While her daughter flew through the arts and crafts portion and was able to handwrite the “sloppy copy” of her presentation, she struggled when it came to typing the final draft. Tools for verifying and assessing the validity of social media and user-generated content - Journalist's Resource Journalist's Resource.

Advocacy, Legislation & Issues. In the span of a single generation, the Internet has revolutionized the basic functions and operations of libraries and schools and expanded exponentially both the opportunities and challenges these institutions face in serving their users. During this time many schools and libraries in the United States have installed content filters on their Internet access.

They have done so for a variety of reasons, not least of which is the requirement to comply with the Children’s Internet Protection Act (CIPA) in order to be eligible to receive federal funding or discounts through the Library Services and Technology Act, Title III of the Elementary and Secondary Education Act, and the Universal Service discount program (E-rate), or to comply with state filtering requirements that may also be tied to state funding.

What Would Winston Do? Here’s something a little different from Touch Press, the developers of the extraordinary Beethoven’s Ninth Symphony, The Waste Land, and Molecules, among other productions. Aussie’s Jar'Edo Wens prank sets new record as Wikipedia’s longest-running hoax. Subtle vandalism: You won't find any rock art depicting Jar'Edo Wens on the walls of caves in the Kimberley. Photo: Greg Totman Ten longest-running known Wikipedia hoaxes. Things That Make the Librarian Angry — The Message. Link to hoax sites in LM_Net archives. Hoax websites.