I am a Chief Counsel of the American Center for Law and Justice (ACLJ), one of the most prestigious law firms in the country. I am also a Supreme Court advocate, renowned expert on religious liberty, a number 1 New York Times-bestselling author, and a respected broadcaster. 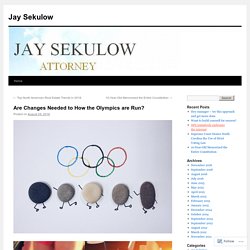 Cities vie for the honor of hosting them and then spend huge portions of their nation’s and city’s budgets to build the necessary facilities, many that won’t have any use after the game end – millions of dollars spent on facilities used for only two weeks. Thousands Displaced If that were all, it would be bad. But it’s not, to come up with the land and the funds, tens of thousands of people are displaced, left homeless in many cases – usually people that have no fallback options. Supreme Court Denies North Carolina the Use of Strict Voting Law. On August 31, 2016, the Supreme Court denied North Carolina’s request to use part of a voting law that had already been declared unconstitutional. 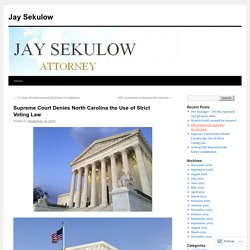 The part would have restored a photo ID requirement, reduced the number of early-voting days from 17 to 10, and ended the practice of pre-­registering teenagers so they would not have to worry about enrolling when they turned 18. Chief Justice John G. Roberts Jr., Justice Anthony M. Kennedy, Justice Clarence Thomas, and Justice Samuel A.