Solve mass shootings with Thoughts & Prayers: The Game. GOP Arcade In the wake of yet another mass shooting, Americans of all political persuasions are looking for ways to prevent the next tragedy before it happens. 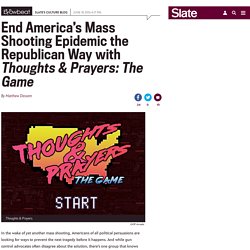 And while gun control advocates often disagree about the solution, there’s one group that knows exactly what to do: Republican members of congress. They’re the only people with the moral courage to tell the country the hard truth: the best way to end the mass shooting epidemic—well, second best, after “good guys with guns” everywhere—is to offer thoughts and prayers to the victims. And nothing else. Now, thanks to the folks at GOP Arcade, a new online game gives everyone the chance to be just as effective as a Republican legislator: Thoughts & Prayers: The Game.

Thoughts & Prayers is available to play for free right here. You can choose to fight off the onslaught of senseless death and destruction any way you like: by offering thoughts or prayers. Proof that Concealed Carry permit holders live in a dream world, Part One. How the NRA perverted the meaning of the 2nd Amendment. Alex Wong/Getty Images Sunday night, when my son asked me why we shoot each other dead almost every day in America, I got to tell him that it’s because we are “free.” 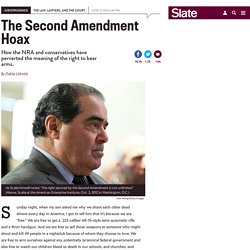 We are free to get a .223 caliber AR-15–style semi-automatic rifle and a 9mm handgun. And we are free to sell those weapons to someone who might shoot and kill 49 people in a nightclub because of whom they choose to love. We are free to arm ourselves against any potentially tyrannical federal government and also free to watch our children bleed to death in our schools, and churches, and clubs. Dahlia Lithwick writes about the courts and the law for Slate, and hosts the podcast Amicus. And we are free to do it all again tomorrow and the day after that. What does all this have to do with freedom? This is where I tell you that the current interpretation of the Second Amendment—the one held onto by Carson, and Donald Trump, and practically the entire Republican Party—is a hoax.

What changed? That is, of course the paradox. Mass shootings since Sandy Hook, in one map. In December 2012, a gunman walked into Sandy Hook Elementary School in Newtown, Connecticut, and killed 20 children, six adults, and himself. 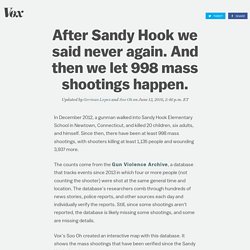 Since then, there have been at least 998 mass shootings, with shooters killing at least 1,135 people and wounding 3,937 more. The counts come from the Gun Violence Archive, a database that tracks events since 2013 in which four or more people (not counting the shooter) were shot at the same general time and location. The database’s researchers comb through hundreds of news stories, police reports, and other sources each day and individually verify the reports. Still, since some shootings aren't reported, the database is likely missing some shootings, and some are missing details. 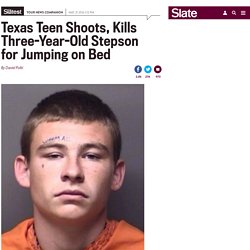 When police first answered a call to a trailer home in rural Clay County on Tuesday, witnesses said Dominic Tra'Juan Castro was jumping on the bed and caused a gun that was on the bed to accidentally discharge. Further questioning revealed that wasn’t quite the case. George Coty Wayman, 18, was arrested on Wednesday after witnesses said he had pointed the gun at Castro and told him he would shoot if he didn’t stop jumping on the bed.

Wayman then fired the gun and hit Castro, who died Wednesday morning. Louisiana girl, 5, shot and killed herself while father was taking shower. Screenshot/WVUE Haley Moore happened to find her father’s unsecured gun on a table at his home in Louisiana while he was taking a shower. 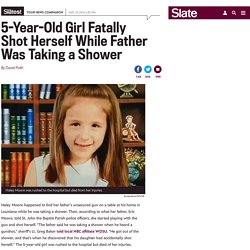 Then, according to what her father, Eric Moore, told St. John the Baptist Parish police officers, she started playing with the gun and shot herself. "The father said he was taking a shower when he heard a gunshot," sheriff's Lt. Greg Baker told local NBC affiliate WDSU. Haley Moore’s sister and brother ran into the street after the shot was fired and a neighbor, Joy Ursin, took them inside.

Ursin told local CBS affiliate WWL that the whole thing was a bit unusual because the father, a military veteran, would often speak about the importance of gun safety.