What is a Psychological Disorder? By Amy Broadway, researcher at the Brogaard Lab for Multisensory Research Source: Public Domain When it comes to navigating personal relationships, it’s to our advantage to be sensitive to mental health issues. 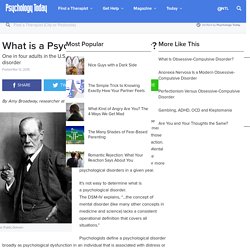 How do you decide what's normal and what's abnormal? If you were to define disorder as something that lies outside of the statistical norm, then people who are considered exceptionally talented or gifted in a particular area would be regarded as abnormal. Today many psychologists agree that psychological disorders are characterized by both personal distress and impairment in multiple areas of life. Singapore Association for Mental Health : Mental Wellness for All. A mental illness is a disturbance of the mind that impairs the way we think, feel and behave.

It affects our daily activities, as well as impact the lives of family members and friends. Mood and anxiety disorders are the most common mental illnesses. SMHS news release. Fast Facts on Mental Health in Singapore. 51% of mental illness patients suffer from a chronic physical illness, because there is a link between the twoDepression, alcohol abuse and obsessive compulsive disorder are the top 3 most common disorders in Singapore29 The age at which the majority of mental illnesses occur5.8% of the adult population in Singapore has suffered from depression at some point in their lives Symptoms of top 3 disorders Depression: loses interest in daily life, has feelings of hopelessness and thoughts of suicide Alcohol Abuse: has to drink more and more alcohol to feel its effects as tolerance for the substance increases, experiences sweating and other withdrawal symptoms when not drinking Obsessive Compulsive Disorder Obsessive: has persistent and irrational thoughts, impulses or images that cause anxiety or distress like an overwhelming fear of germs and dirt Compulsive: repeats actions like checking and rechecking locks several times over.

6 common mental disorders affecting Singaporeans today and where you can go to get help, Business Insider - Business Insider Singapore. Pexels There’s been an increase in the number of Singapore adults who have suffered from a mental disorder in their lifetimes, the Institute of Mental Health (IMH) said recently. According to a 2016 study, one in seven people in Singapore have experienced specific mood, anxiety, or alcohol use disorders in their lifetime, up from roughly one in eight six years prior. OCD one of the most common mental disorders in Singapore. SINGAPORE: Obsessive compulsive disorder (OCD) is one of most common mental health conditions here, according to findings from a nationwide study released on Tuesday (Dec 11). The disorder affected one in 28 people in their lifetime, making it the third-most prevalent condition after major depressive disorder and alcohol abuse.

The illness is commonly characterised by recurrent and persistent thoughts, impulses or images, and when severe, impedes a person's ability to function. Younger people aged 18 to 34 were more likely to have the condition than those aged 50 and above, said researchers from the Institute of Mental Health (IMH) and Nanyang Technological University (NTU), citing the findings from the second Singapore Mental Health Study. The study also found that those who had a monthly household income of between S$2,000 and S$3,999 were less likely to have the condition than those with a household income of less than S$2,000. “It’s a very neglected disorder,” said Assoc Prof Mythily. More people in Singapore have experienced a mental disorder in their lifetime, study finds. SINGAPORE — One in seven people in Singapore have experienced a mental disorder such as bipolar disorder or alcohol abuse in their lifetime, an increase from roughly one in eight several years ago.

The top three mental disorders here were major depressive disorder, alcohol abuse and obsessive compulsive disorder. This is based on the finding of the second Singapore Mental Health Study, which started in 2016 and involved interviews with 6,126 Singaporeans and permanent residents. Read also Gen Y Speaks: What caring for my mum taught me about mental illness The lifetime prevalence of 13.9 per cent in 2016 marked an increase from 12 per cent in 2010, when the first study was conducted.

More people in Singapore struggling with alcohol abuse, but seeking help earlier: Study, Health News. SINGAPORE - A mental health study has shown that while alcohol abuse is a growing problem here, sufferers have been seeking help earlier. The second Singapore Mental Health Study, conducted in 2016, found that one in 24 people struggled with the problem in their lifetime, or 4.1 per cent of the population.

This is up from one in 32 people in the landmark study done in 2010. Symptoms include recurrent alcohol use that affects obligations at work, school, or home. But sufferers also sought treatment earlier – the median number of years they delayed treatment in 2016 was four years, down from 13 years in 2010. The results released on Tuesday (Dec 11) also showed that a smaller proportion, or 0.5 per cent of the population, suffered from alcohol dependence. This refers to a condition where a person is hit with withdrawal symptoms when intake is stopped, among other things. It involved face-to-face interviews with more than 6,000 Singaporeans and permanent residents aged 18 and above. Alcohol abuse worse among younger people, Singapore News. SINGAPORE (THE NEW PAPER) - The young man woke up in his bed one morning to find himself surrounded by chocolates.

He had blacked out after a night of heavy drinking and had no recollection of how he had got home with his bounty. The young man, who does not even like chocolates, suspected that he might have stolen them and was lucky not to have been caught. Mr Lawrence Tan, a psychologist, related this anecdote to show how excessive drinking can lead to individuals committing a crime without being aware of it.

He told The New Paper: "I work with people as young as 17 who have trouble with alcohol, and this can lead to other problematic behaviours. " Dr Reina Lim, a consultant at Singapore General Hospital's Department of Gastroenterology and Hepatology, said people here have shown a growing interest in alcohol as Singapore becomes more prosperous. "The per capital alcohol consumption in Singapore has nearly trebled from 2005 to 2015.

Dr Lim said: "Binge drinking is harmful. A Social Experiment on Mental Health Stigma. Considerable stigma against mental illness: Study. SINGAPORE — An Institute of Mental Health (IMH) study has found a common perception here that those with mental illness can get better if they wanted to and that their condition is a sign of personal weakness. Researchers behind the study said this suggests “considerable” stigma towards individuals with mental illness. The stigma could hinder such individuals from seeking treatment out of fear of being associated with a disorder. The mental health literacy study spanning one year started in March last year and involved about 3,000 adult residents aged between 18 and 65.

It examined how well people could recognise five common mental disorders — alcohol abuse, dementia, Major Depressive Disorder (MDD), Obsessive Compulsive Disorder (OCD) and schizophrenia — and their beliefs towards these conditions. To measure stigma, researchers used scales to gauge people’s attitudes towards the individual suffering from a mental illness, as well as how willing they are to spend time with such persons.

The Stigma Of Depression. Many still steer clear of people with mental illness: Poll, Singapore News. Even as more people are seeking outpatient treatment at the Institute of Mental Health (IMH), more than five in 10 respondents in a recent survey indicated they are unwilling to live with, live nearby or work with a person with a mental health condition. The survey, which is the first of its kind by the National Council of Social Service (NCSS), found that most people agree that more needs to be done to reduce societal stigma, yet they are also reluctant to accept them on an individual level.

Stigma among Singaporean youths. ‘Crazy, weird, scary’: Survey unveils negative labels youths associate with mental illness. SINGAPORE — Researchers have called for regular and compulsory education on mental health for youths, in the wake of a study that found a large proportion of this group having misconceptions of mental illness. Almost half (44.5 per cent) of 940 teenage students polled attached negative and pejorative labels to people with mental illness. “Crazy”, “weird”, “scary”, “stupid” and “dangerous” were among the words that came to mind then the respondents heard the term “mental illness”, reported the study, which was presented at the Frontiers in Mental Health symposium organised by the Institute of Mental Health (IMH) and Nanyang Technological University’s Lee Kong Chian School of Medicine on Tuesday (March 6).

Some 46.2 per cent of the respondents, who were aged between 14 and 18, also said they would be “very embarrassed” if they were diagnosed with a mental illness, while nearly a quarter (22.7 per cent) said they would not want others to know if their relative were mentally ill. Stigma and discrimination. People with mental health problems say that the social stigma attached to mental ill health and the discrimination they experience can make their difficulties worse and make it harder to recover. 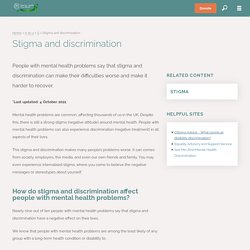 “Examples of self-imposed stigma include endorsement of negative stereotypes held by the public such as ‘I am dangerous’, ‘I am weak’, or ‘I am ashamed that I have a mental illness’,” she said. Based on an 18-month study on 280 outpatients from IMH suffering from depression, schizophrenia, anxiety or obsessive compulsive disorder (OCD), researchers have found that self-imposed stigma may influence the impact of perceived stigma, quality of life, self-esteem and function. NCSS - Persons with Mental Health Conditions. Understanding Your Mental Health – Institute of Mental Health. "There is no health without mental health" Mental illness more prevalent among young adults, OCD one of top disorders in S’pore. Coping with depression.

Everyone has felt sad at one time or another. Usually it is due to a disappointment, frustration or losing someone. Such sadness is normal. Time heals, the mood lifts and people continue to get on with their lives. But in some people, depression can be so severe that it dominates their lives, preventing them from coping as they are used to. Depression Emergency Hotline and Other Health Helplines. LIST OF HELPLINES.