Muckety - Exploring the paths of power and influence 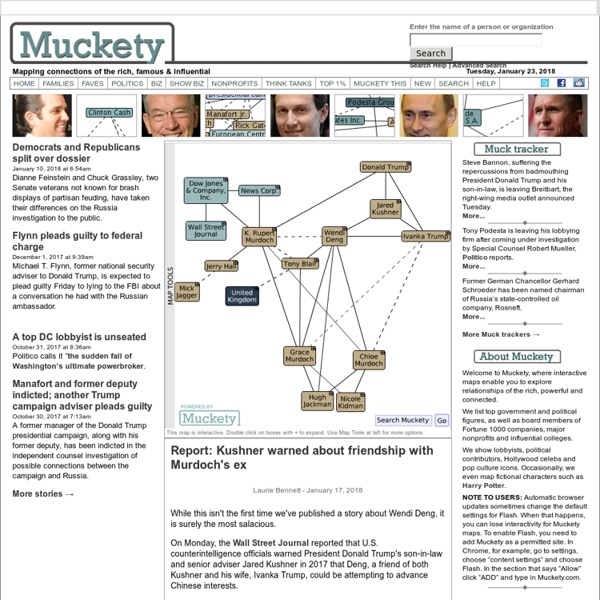 Best of TED: Hans Rosling Hans Rosling is probably the only academic who ends his PowerPoint presentation by swallowing a sword. He does this while wearing a muscle-T bedazzled with lightning bolts made from shiny, gold sequins. Rosling is probably also the only academic who can make dry sta tistics dance like musical theater stars while revealing startling facts about the world and debunking preconceptions. Learning from Lombardi This text is from a short (ten minute) talk that I gave as part of Alice Rawsthorne's panel for Experimenta Design in Lisbon, Portugal. For the panel, we were to choose "an individual, movement, technology, whatever - whose importance has been overlooked" and follow that with "two themes that [we] believe will define the future of design and architecture." In that context, I chose Lombardi's work, and how it highlights a number of themes that are important to the future of design, particularly in working with data. That said, this is not a comprehensive look at Mark Lombardi's work, nor is it especially scholarly, intelligent, or insightful.

WUJS Zionism and Israel Advocacy Guide Writing this handbook has been a difficult task. Trying to strike a balance between support for Israel, and a realisation that some things just aren’t black and white has been our goal. We hope that what has resulted is useful to Jewish students everywhere, and that ultimately Israel is strengthened through our efforts. Jewish students in the Diaspora are not unconditional supporters of Israel, just as Israelis have different political preferences. Unfortunately, many Jewish students express their dissatisfaction with some government action or other by ignoring Israel, giving up on her just when she needs the most help and support.

W. Bradford Paley: Map of science image in the journal Nature Update: This has now been published in many more places: the original Nature article, Discover Magazine, SEED, Geo, the Eastern European Edition and India, Brazil, etc., and more books and papers. Since the image has proven to be popular (we still get print & publication requests, four lears later!), I decided to rework the existing image layers, modifying only the graphical representation—no structure—to see whether I could improve the information layering and remedy some of the faults I outline at the bottom of this page. Lecture - The Invention of the Jewish People Let's face it, the Jews have long been a troublesome people for the rest of the planet. Of course, that topic or virtually anything to do with Jews is a minefield of issues especially since the Jews control the media and the banks and a speck of dust on the eastern shores of the Mediterranean. For most people, their latent anti-Semitism is a barely a tic on their panoply of biases and disaffections. But there is that crucial and volatile problem which is, of course, the state of Israel and its right to exist. And more to the point the claims made to reify that right together with oil imperialism, the clash of civilizations, and again the millenia-old contempt for the the Christ killers--all of which have dovetailed into the great cauldron of dilemmas we know as the Middle East. One can take it on board that every nation and ethnicity has a mythology of creation.

How Might We Visualize Data in More Effective and Inspiring Ways We have many dashboards available to us today in many contexts: finance, forecasts, consumption, demographics, etc. We witness the emergence of beautiful graphical representations more frequently than ever. Instead of flooding this post with examples of data visualization, I would like to put the spotlight on how we processes them, and what challenges that presents. A couple of years ago, we were tasked at IDEO to design dashboard visualizations for Ford's next generation hybrid vehicle, the Ford Fusion. Hybrid cars are efficient only if the driver maximizes the car's potential; in other words, if the driver learns to make sense of the complex mechanics of two motors and regenerative braking. If the dashboard is the interface between the driver and the car, how might it coach drivers to make sense of this complexity and to adopt efficient driving habits?

Rick Shenkman: How Are Lawyers Like Politicians? - Politics on The Huffington Post Lawyers have to appeal to juries the way pols have to appeal to voters. And often they follow a similar approach. Ask a good lawyer how they win over a jury and they'll say you have to create a narrative the jurors can easily follow. That's just what pols have to do too. I can remember when I was an investigative reporter in Salt Lake City the lead prosecutor in a complicated bribery case told me her greatest challenge was making the convoluted connections between the defendants understandable.

Tutorials ICanLocalize - Android Localization Tutorial In this tutorial we show how to write multilingual Android apps. To build multilingual Android apps you need to collect the texts into resource files and translate them. Once you provide the translation, Android OS will choose the resources that match user’s locale. If your application is available in several languages, Android will select the language that the device uses. Read the rest of this tutorial »

The DoubleThink - The Art &amp; Science of the New Marketing Posted 2009.05.06 I was cleaning up my office yesterday when I stumbled across a little book called Why Yesterday Tells of Tomorrow, by Helmut Gaus. A friend gave it to me years ago and I smiled when I saw the cover again. I remembered it showed some of the most creative (some would say outrageous) data correlations I had ever seen. One of them for example compared the average length of skirts with the number of suicides in France. The point Gaus was making however was very interesting and it couldn’t be more actual today.

Figures of Speech - Learn to Talk Like Bush! (And Why You Should Want To) What you say: Oh Ginger, that was a bad thing. You’re a bad, bad dog, Ginger. What a dog hears: Blah Ginger, blah blah blah. Blah blah blah blah, Ginger. — "Far Side" CartoonWhat Bush says: And when you engage the terrorists abroad, it causes activity and action. What sticks in people’s minds: …engage the terrorists…activity…action. Deschooling Society by Ivan Illich by Ivan Illich I owe my interest in public education to Everett Reimer. Until we first met in Puerto Rico in 1958, I had never questioned the value of extending obligatory schooling to all people. Together we have come to realize that for most men the right to learn is curtailed by the obligation to attend school. The essays given at CIDOC and gathered in this book grew out of memoranda which I submitted to him, and which we discussed during 1970, the thirteenth year of our dialogue. The last chapter contains my afterthoughts on a conversation with Erich Fromm on Bachofen's Mutterrecht.

Bradley Manning and the Future of Punishment Yeah! Kill the guy who revealed to the rest of America what lies their government had been keeping from them. I love how Americans are so ready to just string up the guy who finally pulled back the curtain on the horrific actions being taken in their name. You want to bitch about 'criticizing' president Karzai (whom Bush installed there) and then you say "The U.S. does not want to repeat its Cold War mistakes of aiding corrupt governments for political expediency. " in regards to Ecuador. Social Psychological Phenomena: Granfalloons etc. ...attribute the statement to Nostradamus and the dynamics change. Nostradamus was a man who supposedly cured plague victims, predicted who would be pope, foretold the future of kings and queens, and even found a poor dog lost by the king's page (Randi 1993). Such a great seer and prophet can't be wrong. The implied message: The problem is with you; instead of questioning, why don't you suspend your faulty, linear mind until you gain the needed insight? 4. Establish a Granfalloon