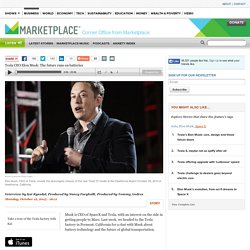 Nature Is The Ultimate 3-D Printer: Can We Make Our New Manufacturing As Clean? Before the Gutenberg press, the mechanical loom, the steam engine, or the computer became ubiquitous, there was a pause. 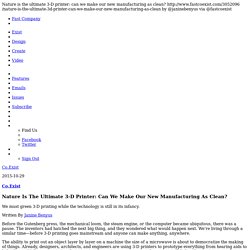 The inventors had hatched the next big thing, and they wondered what would happen next. We’re living through a similar time—before 3-D printing goes mainstream and anyone can make anything, anywhere. Homeless in Sacramento: A death on the streets. Photos courtesy of the Lucchesi and Boyer families October 24, 2015 By Cynthia Hubert | Photos and video by Manny Crisostomo chubert@sacbee.com | mcrisostomo@sacbee.com. 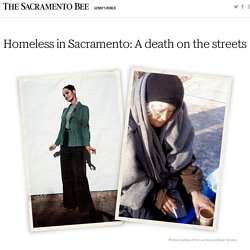 The New York Times > Opinion > Image > World's First Solar Airport Generates More Power Than It Consumes. More than 46,000 solar panels have been laid out across 45 acres of land to fuel the operations of Cochin airport, India’s fourth largest in terms of international passenger traffic. 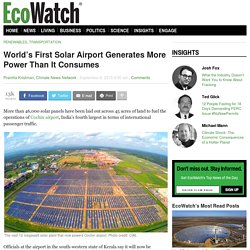 Umair Haque on the tech industry's "thin value problem" Umair Haque thinks that Silicon Valley is in a competency trap. 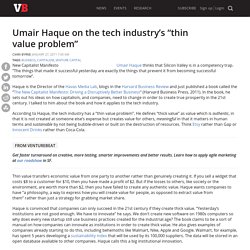 “The things that made it successful yesterday are exactly the things that prevent it from becoming successful tomorrow”. Haque is the Director of the Havas Media Lab, blogs in the Harvard Business Review and just published a book called the “The New Capitalist Manifesto: Driving a Disruptively Better Business” (Harvard Business Press, 2011). In the book, he sets out his ideas on how capitalism, and companies, need to change in order to create true prosperity in the 21st century.

I talked to him about the book and how it applies to the tech industry. According to Haque, the tech industry has a “thin value problem”. The Messengers - Pacific Standard. Address to the Woods Hole Symposium - William McDonough. © William McDonough, July 2003 I remember being here a few years ago when George Woodwell and I first started talking about the Woods Hole Research Center. 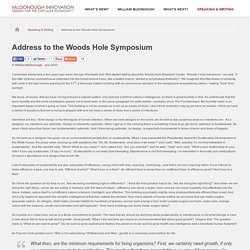 “Wouldn’t it be marvelous,” we said, “if this little Victorian summerhouse extended into the forest behind it and, like a leafed branch, started to act photosynthetically?” We imagined this little flower of creativity with roots in the last century aspiring for the 21st, a famously historic building with an anonymous structure in the background sequestering carbon, making “food” from sunlight. Is the World (Really) Getting Better? — Bad Words. The powerful words of forgiveness delivered to Dylann Roof by victims’ relatives. Relatives of Charleston church shooting victims hold hands outside a bond hearing for Dylann Roof. 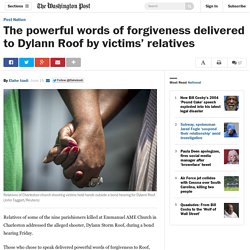 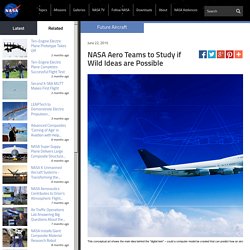 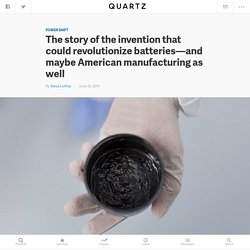 Since about 2010, a critical mass of national leaders, policy professionals, scientists, entrepreneurs, thinkers and writers have all but demanded a transformation of the humble lithium-ion cell. Only batteries that can store a lot more energy for a lower price, they have said, will allow for affordable electric cars, cheaper and more widely available electricity, and a reduction in greenhouse gas emissions. In the process, a lot of gazillionaires will be created. The Future of Wind Turbines? No Blades. Yes, Robots Really Are Going To Take Your Job And End The American Dream. There's nothing new about fears of technological unemployment. 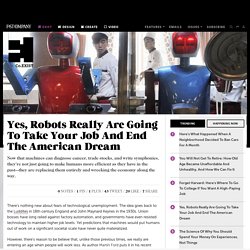 The idea goes back to the Luddites in 18th century England and John Maynard Keynes in the 1930s. Union bosses have long railed against factory automation, and governments have even resisted technology to maintain higher job levels. Yet predictions that machines would put humans out of work on a significant societal scale have never quite materialized. Failure is Underrated and Overburdened. Don’t fear it - use it! This is an expanded version of an article published in the Wall Street Journal.

Introduction Most advice you're going to hear on failure will be trite. Statements like “fail fast” or “learn from it”. The McDonough Conversations: On joy and cereal boxes. This is the first in a periodic series of one-on-one interviews with William McDonough, the renowned designer, architect and entrepreneur, looking into his rich, kaleidoscopic professional world. McDonough has been at the forefront of many of sustainability’s most important trends: green buildings, closed-loop systems and Cradle to Cradle design, among others.

View previous columns here. The Moral Bucket List. Photo ABOUT once a month I run across a person who radiates an inner light. Sacred Economics with Charles Eisenstein - A Short Film. C.S. Lewis on Suffering and What It Means to Have Free Will in a Universe of Fixed Laws. Where A Life Worth Living Comes From — Bad Words. Quick: How do we sell the most stuff? Sign Up. An affordable molecular sensor that analyzes the chemical makeup of anything. What Earth would look like if the ice melted. What Jon Stewart Can Teach Us About Becoming Successful. We Can All Prosper - A Systems View » The World Without Us - Alan Weisman. AirCarbon. AirCarbon™ is a material made by sequestering carbon emissions that would otherwise become part of the air.

Sustainable. While almost all plastics today are made exclusively from oil or other fossil fuels, AirCarbon is different. AirCarbon is made by combining air with methane-based carbon emissions–carbon that would otherwise become part of the air we breathe–to produce a material that is approximately 40% oxygen from air and 60% carbon and hydrogen from captured methane emissions by weight. By replacing oil with AirCarbon™, we transform the products we use everyday into materials that sequester more greenhouse gas than they emit and actually improve the world–displacing oil, reducing cost, and reducing the amount of carbon in the air.

High-Performance. Carbon-Negative. Dalai Lama at a Santa Fe ski resort: Tells waitress the meaning of life. Photo courtesy Bob Shaw. The man behind Africa’s growing digital democratization movement. Ten Stupid Rules That Drive Great Employees Away. Hard Road Ahead for Solar Freakin’ Roadways. The views expressed are those of the author and are not necessarily those of Scientific American. Faith and fears in Wendell Berry’s Kentucky. A Slow Web Manifesto — Bad Words. Is This the Key to Elon Musk's Massive Success? (TSLA) Jeremy Heimans: What new power looks like. Elon Musk in Oslo 01.02.2014. How To Be Efficient: Dan Ariely's 6 New Secrets To Managing Your Time. The Secret of Effective Motivation. How an Oven Changed the Fate of a Neglected Toronto Park. Youtopia — Bad Words. 20 years later, Interface looks back on Ray Anderson's legacy. Whose Life Are You Really Living? — Bad Words.