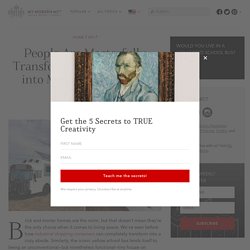 We've seen before how industrial shipping containers can completely transform into a cozy abode. Similarly, the iconic yellow school bus lends itself to being an unconventional—but nonetheless functional—tiny house on wheels. An incredible school bus conversion is often called a “skooly.” Why a school bus? So, what's the appeal of a school bus conversion? School buses are built to last. The initial cost of buying a bus is relatively inexpensive—especially when you compare it with the cost of an RV. Converted school bus DIYs Throughout the years, many folks have themselves converted an old bus into a unique RV home. Outside Found can have adventures anywhere. Will and Alyssa are two bloggers and adventurers of the website Outside Found. When you step inside, the bright and airy space doesn't feel like a bus at all. The Midwest Wanderers can comfortably go off the grid. Home Design, Garden & Architecture Blog Magazine. “This off grid bus conversion has been our home for over three years and taken us to over half of the states! 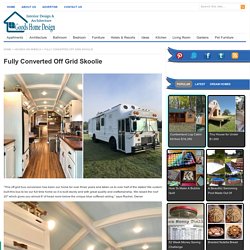 We custom built this bus to be our full time home so it is built sturdy and with great quality and craftsmanship. We raised the roof 20″ which gives you almost 8′ of head room below the unique blue coffered ceiling.” says Rachel, Owner The kitchen is fully functional with lots of storage. The dining table hinges to fold against the wall making the already open space across from the couch even MORE open.

The large RV windows (double pane and tinted) add great natural light into the bus. (2) Facebook. Newlyweds Build Skoolie For Less Than $10k. On July 24, 2019 This is the story of Matt and Christa’s and the skoolie that they built for less than $10,000! 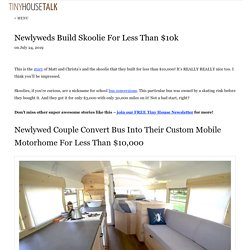 It’s REALLY REALLY nice too. I think you’ll be impressed. Skoolies, if you’re curious, are a nickname for school bus conversions. They're Living And Traveling In A Huge Van With 2 Kids! On September 28, 2019 This is the story of Colin and Sofi. 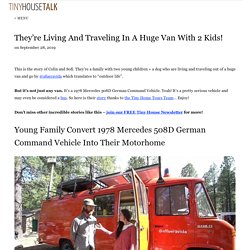 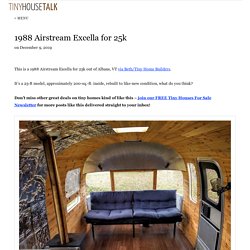 It’s a 25-ft model, approximately 200-sq. -ft. inside, rebuilt to like-new condition, what do you think? 23-Year-Old Filmmaker's Cargo Van Tiny House. On June 28, 2016 This is the story of a 23-year-old filmmaker’s cargo van tiny house conversion. 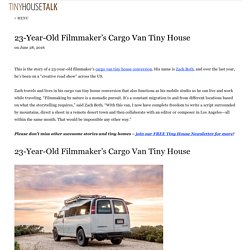 His name is Zach Both, and over the last year, he’s been on a “creative road show” across the US. Zach travels and lives in his cargo van tiny house conversion that also functions as his mobile studio so he can live and work while traveling. “Filmmaking by nature is a nomadic pursuit. It’s a constant migration to and from different locations based on what the storytelling requires,” said Zach Both. Antique Truck TINY HOUSE Built Using 80% Recycled Materials. On August 3, 2019 This is the story of a couple who built an antique truck tiny house using 80% recycled materials. 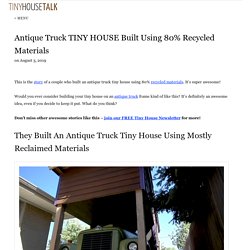 It’s super awesome! Would you ever consider building your tiny house on an antique truck frame kind of like this? It’s definitely an awesome idea, even if you decide to keep it put. What do you think? EPIC Spartan Royal Mansion 40-Foot Trailer RENOVATION... Originally From 1948! On July 23, 2019 This is an epic 1948 Spartan Royal Mansion 40-foot Travel Trailer RENOVATION. 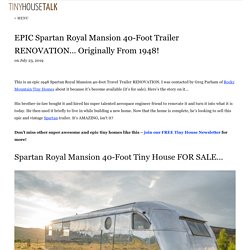 I was contacted by Greg Parham of Rocky Mountain Tiny Homes about it because it’s become available (it’s for sale). Here’s the story on it… His brother-in-law bought it and hired his super talented aerospace engineer friend to renovate it and turn it into what it is today. He then used it briefly to live in while building a new home. Caboose Tiny House Vacations in Essex, Montana. On March 9, 2015 The caboose train car you see below was renovated into the beautiful caboose tiny house that it is today. 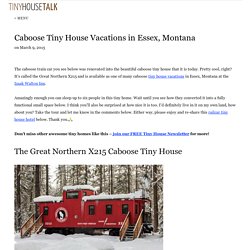 Pretty cool, right? It’s called the Great Northern X215 and is available as one of many caboose tiny house vacations in Essex, Montana at the Izaak Walton Inn. Amazingly enough you can sleep up to six people in this tiny home. Wait until you see how they converted it into a fully functional small space below. Man Converts School Bus into a DIY Motorhome. This is one man’s fantastic school bus-turned-DIY-motorhome. 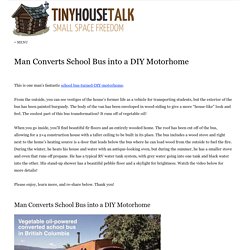 From the outside, you can see vestiges of the house’s former life as a vehicle for transporting students, but the exterior of the bus has been painted burgundy. The body of the van has been enveloped in wood-siding to give a more “house-like” look and feel. The coolest part of this bus transformation? It runs off of vegetable oil! When you go inside, you’ll find beautiful fir floors and an entirely wooded home. Please enjoy, learn more, and re-share below. Images © Exploring Alternatives via YouTube Video Tour and Interview Resources. Horse Truck Rehabbed into Amazing Tiny House Truck! On February 28, 2018 This is the Helga Tiny House Truck by House Box. It’s a former horse truck that they stripped and re-built into the beautiful house truck that you see here! Please enjoy, learn more, and re-share below. Housetruck Archives - Tiny House Swoon. Converted bus Archives - Tiny House Swoon.

Living Simply in a Wonderful Tiny House Truck. Couple convert a VAN into their flat of dreams. Being a young couple in a big city can be quite challenging when it comes to finding cheap rent without giving up on your hobbies. Since rent prices are becoming increasingly higher by day, young people tend to search for alternatives. The same applies for this next couple, who decided to give up their 9 to 5 jobs and up-cycle an old van that eventually became their home. Adam and Nikki got tired of living in the city, spending all their salaries on rent and bills and having to give up their dreams of travelling. So one day, they stumbled upon a white Ford Transit Luton on Ebay and bought it for $4,500 and they spent another $6,500 to convert it into a welcoming apartment. The coolest part about this story is that they did everything by themselves, learning about DIY and up-cycling projects from Youtube. Adam Croft and his girlfriend Nikki Pepperell inside the back of their extra-large transit van they have converted into their new house.

Worn Wear — Jay Nelson. D407 House Truck — Jay Nelson. Vincent the House Truck by HouseBox. On May 11, 2017 This is Vincent the House Truck by HouseBox in Southwest England. It was built for a customer, Imogen, who shared a testimony on the HouseBox website: I love my truck conversion – there’s so much attention to detail & it’s really tailor made, from the snake tank for my corn snake to the fox door-knocker. I was consulted throughout the whole process & really enjoyed being able to pick out the exact look i wanted, from the hinges to the brass kitchen sink. Evan's DIY Conversion Van Tiny Home. On June 30, 2016 This is Evan Jordan’s DIY conversion van tiny home.

He bought the van on Craigslist, and spent 4 months of nights and weekends converting it after work. This is one of the best van conversions I’ve seen. Wothahellizat Mk2 DIY Expedition Motorhome. Posted Categories: Mobility The "Wothahellizat" Mk2 is a 38-year-old army truck. Rob and Chris bought the truck in 1997 and spent three years turning it into Australia's largest and weirdest off-road motor home (The wothahellizat Mk)1. Tiny House Bus with Stained Glass. Bedford Bus to Tiny House Conversion. On August 10, 2013 I love all type of creative and innovative designs and when I ran into this awesome bus from New Zealand I just had to share it with you.

It Looked Like An Old Van, But The Smoke Stack Made Me Curious... I'm Glad I Saw Inside! Here at LittleThings, we see our fair share of mobile tiny houses. We have featured an impressive assortment of tiny houses on wheels including Airstreams, Winnebago’s, buses, trucks, boats, and adorably petite abodes equipped with four spinning tires. Ford Flophouse Tiny House on a Truck. On February 15, 2016. Man Converts School Bus into a DIY Motorhome. On February 13, 2016. A home on wheels: 15 converted buses we love.