Biomimicry Explained with Drawings & Examples. Creating Resilence By Following Nature's Lead. The operating conditions of life are literally symphonic: They are a composition of elements, they have range, there are crescendos and valleys, they have melody and rhythm, they can be harmonic, powerful, even frightening. 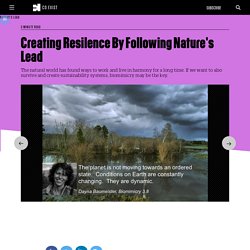 They are dynamic and in motion. Circadian rhythms, tidal rhythms, the seasonality of the distance of our planet from the sun, water flows, and nutrient cycling all fluxing in sync result in a world full of motion and change. Thoughts on Biomimicry » Biomimicry » Rhizome Blog » Biohabitats Inc. When faced with a design challenges, we ask a lot of questions. 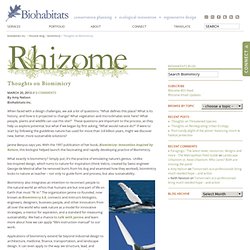 Biomimicry: Emulating Nature’s Genius. While looking for her just-published book in a bookstore, biologist Janine M. 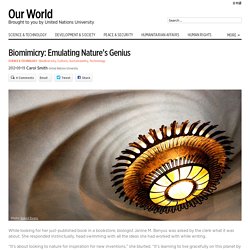 Benyus was asked by the clerk what it was about. She responded instinctually, head swimming with all the ideas she had worked with while writing. A SEED BANK OF INSPIRATION. Biomimicry: using nature's designs to transform agriculture. From lab-grown burgers to farms monitored by sensors and drones, technology lies at the heart of many of today’s sustainable food solutions. 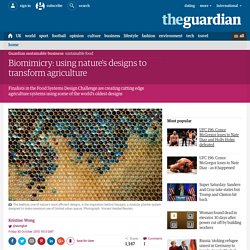 Now, the Biomimicry Institute, a Montana-based nonprofit, is taking the trend a step further with its new Food Systems Design Challenge, encouraging a cadre of entrepreneurs to improve the food production system by emulating techniques and processes found in nature. At the SXSW Eco conference earlier this month, the institute announced the eight finalists in the challenge. “We want to help foster bringing more biomimetic designs to market … to show that biomimicry is a viable and essential design methodology to create a more regenerative and sustainable world,” said Megan Schuknect, the institute’s director of design challenges. Just as natural processes often benefit multiple stakeholders, many competitors in the challenge are seeking to solve multiple problems. How Biomimicry is Inspiring Human Innovation. 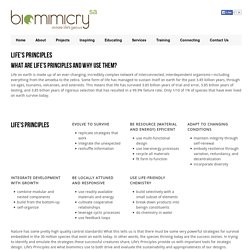 What this tells us is that there must be some very powerful strategies for survival embedded in the 30 million species that exist on earth today. In other words, the species thriving today are the success stories. In trying to identify and emulate the strategies these successful creatures share, Life’s Principles provide us with important tools for strategic design. Biomimicry. Material Minds, presented by ArchDaily Materials, is our new series of short interviews with architects, designers, scientists, and others who use architectural materials in innovative ways. 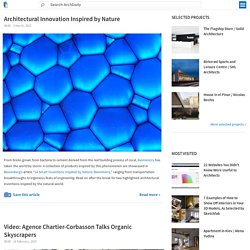 Enjoy! Before attending Columbia University for her Masters in Architecture, Los Angeles-based architect Doris Kim Sung took a fairly non-traditional approach to becoming an architect: she was a biologist. The Biomimicry Manual: What Can Super-Organisms Teach Us About Collaboration? The ants and termites that make their homes in the desert are all ultra-social, spending their days coordinating carefully to build elaborate mounds and nests, farm fungus, herd aphids, and work together in busy cities—much like we do. 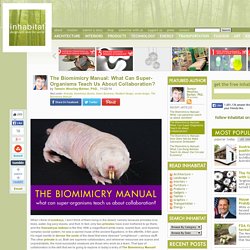 Biologists refer to all of us as “super-organisms”; groups where individuals don’t survive alone for long, everyone has a job to do, and the whole is more than the sum of its parts. Humans and ants must collaborate in order to survive: it’s in our nature. But people have only been noodling around this super-organismic experiment for a couple million years. How the Natural World has Helped Influence Culture and Society. Biophiles (lovers of life, to save you googling) around the world may relish the sights, smells and sounds that nature provides us, but many of us probably take for granted just how profoundly some aspects of the natural world have impacted our culture and society throughout history. 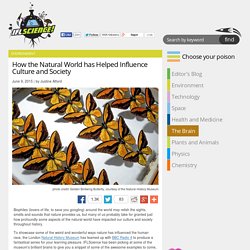 To showcase some of the weird and wonderful ways nature has influenced the human race, the London Natural History Museum has teamed up with BBC Radio 4 to produce a fantastical series for your learning pleasure. IFLScience has been picking at some of the museum’s brilliant brains to give you a snippet of some of the awesome examples to come, and here they are: How Brambles Help Forensic Investigations Starting off on a rather grim topic, but did you know that brambles, those prickly shrubs that bring to us delicious blackberries and raspberries, can be used to help murder enquiries or suspicious death cases? Janine Benyus: Biomimicry in action. Biomimicry NYC » Crafting the Ultimate Post-Industrial Design Brief Using Biomimicry. By Adiel Gavish “What the industrial age has done is take life away from the planet and turn it into goods and services,” Paul Hawken stated at the 2014 VERGE Conference in San Francisco this past December. 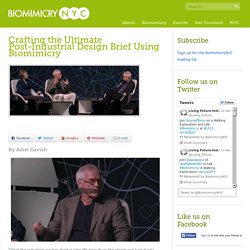 The annual event put on by Joel Makower, a former Biomimicry 3.8 Board Member and GreenBiz.com brings corporations and entrepreneurs together around the convergence of energy, buildings and transportation technologies which will “…enable radical efficiencies and huge opportunities.” Mr. Makower interviewed both Janine Benyus and Paul Hawken around the idea of “running the industrial age backwards” and how nature can teach us how to undo the damage caused by unraveling the fabric of Earth’s balanced resources. Janine Benyus: Biomimicry's surprising lessons from nature's engineers. BIOMIMICRY. Biomimicry is a 20-minute film featuring Janine Benyus. 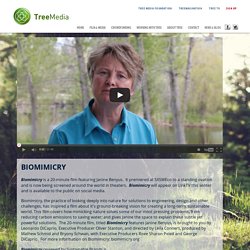 Biomimicry: How Nature Inspired Today’s Technology. Technology and nature have traditionally been viewed as divergent forces – technology often has been a means of creating objects or energies that do not naturally occur in our surrounding environment. However, new approaches to product and technology development such as biomimicry and generative design have turned begun to reverse that trend.

Generative design is the process of taking the framework of an idea and translating it into a set of rules, which are then interpreted by a high-powered computer. By simulating thousands of variations using high-powered computing, this process mimics the natural process of evolution. Jeff Kowalski, Chief Technology Officer at Autodesk, describes the generative design process, “Machine-learning algorithms in computers can now detect patterns inherent in millions of 3D models and generate taxonomies without direction or intervention by humans.” 1.

How Biomimicry Works. Submarines of the future speed through the water with the help of wiggling fish fins. Aircraft ascend through the clouds with flapping wings. In the desert, a climber steadily approa­ches the summit of a cliff, open palms effortlessly sticking to rock with the use of gecko-inspired nanotechnology. You've probably only encountered such nature-inspired future technologies in the imagined worlds of science fiction and comic books, but the design approach already exists. Inventors and engineers have been looking to nature for inspiration ever since prehistoric times. Early humans learned hunting, shelter and survival techniques by observing animals as they interacted with their surroundings. The world is full of amazing biological innovations, each one the product of millions of years of evolution.