News Corp, the New York Times and Axel Springer are backing Scroll, a subscription service from the former CEO of Chartbeat - Recode. Knight News Challenge winners focus on data and transparency. The Knight Foundation just announced the latest round of winners in the Knight News Challenge and its latest batch of Knight Prototype Fund grantees: 17 projects in all, awarded $3.2 million. 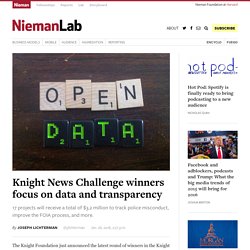 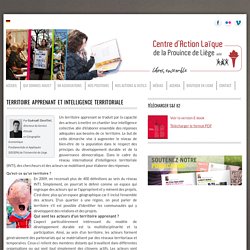 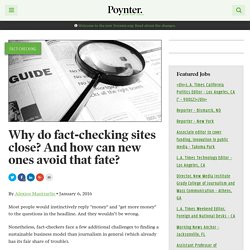 And they wouldn’t be wrong. Nonetheless, fact-checkers face a few additional challenges to finding a sustainable business model than journalism in general (which already has its fair share of trouble). First of all, because their mission is tied to offering an impartial service, fact-checkers tend to eschew funding that could appear partisan, even more so than other media organizations. Fact-checking at the moment is also less scalable and more labor-intensive than some other journalistic projects. Unlike sports and business coverage, fact checking cannot yet reliably be automated, so many journalists are required to verify the overabundance of suspect claims. The Financial Times aims to transform its opinion section under first innovation editor. The Financial Times has appointed John Thornhill as its first innovation editor, to evolve the way the outlet commissions and publishes opinion pieces across different platforms by bringing new technology into the newsroom. 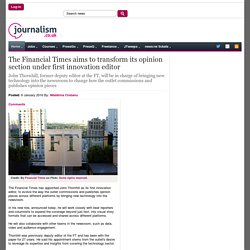 In his new role, announced today, he will work closely with beat reporters and columnists to expand the coverage beyond just text, into visual story formats that can be accessed and shared across different platforms. He will also collaborate with other teams in the newsroom, such as data, video and audience engagement. Thornhill was previously deputy editor of the FT and has been with the paper for 27 years. He said his appointment stems from the outlet's desire to leverage its expertise and insights from covering the technology sector. Yahoo shuts down Yahoo Screen. © Time Inc. 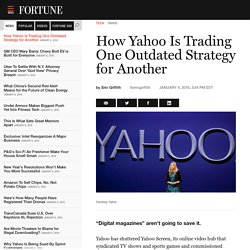 All rights reserved. Fortune.com is a part of the Time.com network of sites. Powered by WordPress.com VIP Email address or Password is incorrect. Snapchat is building an ad technology platform. Snapchat is working on a crucial part of its growing digital ad business: an application programming interface (API) that would let partners start buying ads with more precision and frequency, according to multiple sources. 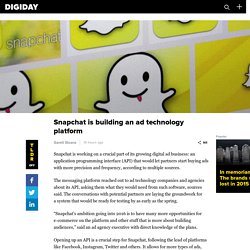 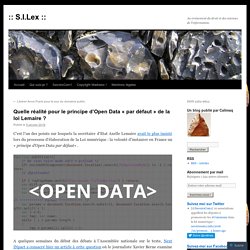 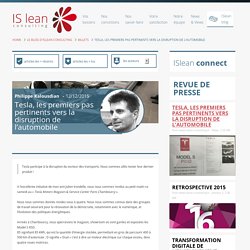 Nous sommes allés tester leur dernier produit ! New on Netflix's 2016 Agenda: Making Real Money. Netflix Inc., which delivered the best return of any stock in the S&P 500 last year, has ambitious plans for this year so it can produce something new next year: serious profits. 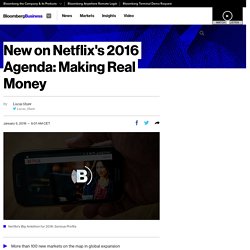 Investors have been fine with very little of those because Chief Executive Officer Reed Hastings has said things would change after the company completed its global expansion. That’s supposed to happen in 2016, with the introduction of the online video service to more than 100 new markets, including China, India and Indonesia. How Mashable's focus on new revenue models explains its asking price. Going from a twinkle in someone's eye to a company potentially worth $300-350 million is a tall order for any media business. 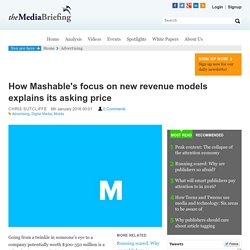 But to have grown to that position in little over a decade is particularly notable - and suggests the company has struck upon something fairly fundamental about human nature along the way. Mashable appears to have done just that. Ken Doctor reported back in December that the tech-focused general news site was shopping around for a buyer, though it also noted that insiders claim a $250 million sale is looking more likely. How Mashable's focus on new revenue models explains its asking price. For Paper Magazine, #BreakingTheInternet Leads To Audience And Revenue Growth.

Eighteen months after rethinking its business, Paper Magazine's traffic has increased 900%. Digital revenue is up 400% over the year before, and for the past six months, inventory has been sold out. The publisher unleashed these changes by prioritizing a platform-agnostic approach over print. It began publishing more frequently, paying closer attention to what readers responded to and using platforms to distribute content. Snapchat is building an ad technology platform.

Running scared: Why are publishers so afraid? Yesterday we published a piece by our contributor Kevin Anderson titled 'The collapse of the attention economy'. Its central tenet is that an overabundance of content to which we all have access has led to an unsustainable environment in which scale is all and practically impossible to achieve. As a result, the valuations of publishers has become uncoupled from actual performance and we're all flailing around to find an accurate measure of success (that doesn't make us look bad in comparison with our competitors).

Based on the response to the article, it's fair to say it hit a nerve. Millennials’ views of news media, religious organizations grow more negative. Younger generations tend to have more-positive views than their elders of a number of institutions that play a big part in American society. But for some institutions – such as churches and the news media – Millennials’ opinions have become markedly more negative in the past five years.

Twitter Invests in Headphone Maker Musik. © Time Inc. All rights reserved. Fortune.com is a part of the Time.com network of sites. Peak content: The collapse of the attention economy. For a long time, we’ve been creating too much content, so much so that I think that we’ve already reached Peak Content, the point at which this glut of things to read, watch and listen to becomes completely unsustainable. There hasn’t been enough ad revenue to sustain it for years and, with 2015 ending with a rush of acquisitions, consolidations and funding rounds with eye-watering valuations, 2016 will mark the beginning of a shake out. Market crashes are the tsunamis that sink, if not all then, a lot of boats, and it’s time to take strategic action.

One of the few workable business models in this age of digital disruption has been to produce as much content as cheaply as possible. L’avenir du numérique en cinq conférences TED. FTC: We’re getting tough on native ads. Back in the print era they were called advertorials, and they were not a big thing, pages in a magazine that sort of looked like editorial but were really extended ads, running several pages. Readers typically were not fooled. As a rule, advertorials were clearly labeled as advertising. The pages did not look like or read like stories in the magazine. Role of Medium in American politics and government: How Medium is breaking Washington's op-ed habit. Medium, the three-year-old online publishing platform run by one of the founders of Twitter, has spent much of its infancy assiduously courting members of the political class. The pitch is clear: Get your message out with none of the editorial interference that comes with old-school media. Story Continued Below The effort has paid off.

Hillary Clinton, under fire for not taking a stand on the Keystone XL pipeline, turned to Medium in September when she decided to come out against the project. Peak content: The collapse of the attention economy. Books and newspapers will do just fine in 2016. Magazines? Not so much. What makes highly creative people different from the rest of us? In the 1960s, psychologist and creativity researcher Frank X. Digital publishers face a winter of discontent. The sunny days of hot growth for digital publishers are fading into a memory as many now face a long, dark winter.

The most likely media and tech developments in 2016. Notifications that know me. Platforms face editorial responsibility. Brand relevance and revenue in the age of Snapchat. When recommendations become news. Novelty is the new normal. Let users personalize their experience. Thank god for adblocking. The most exciting company in media sells a card game. Cleanliness is next to godliness. Adapting to a more global, more diverse Internet. Numbers, numbers everywhere. Paywall mobile. Figuring out digital ads, learning to love print again. When we start getting creative about engagement. A New Emphasis on Fact-Checking in Real Time. Everything You Are Afraid To Ask About Slack Etiquette. Personalized text messages: The new push notification.

Purify Ad Blocker Believes Paying A Few Cents For News Stories Is Too Much. Tiny bites: What can publishers learn about microtransactions from mobile games? R ways publishers are trying to expand their digital reach. Journalists urged to specialize to stand out. Why are we still putting up with scam ads and fake news stories? The sad economics of being famous on the internet. Hate Ads? Maybe You Should Give News Sites Some Bitcoins.

Digital Innovators' Summit: A membership model requires over-delivering for your supporters. Some Media Predictions — Thoughts on Media. What will be the big challenges for mobile journalism in 2016? Want to create a more digital newsroom? Find your inner startup. Google Brings Its App Streaming Technology To Mobile Ads. Interaction on Twitter enhances journalists’ credibility. X Marks the Spot That Makes Online Ads So Maddening. 5 ways De Correspondent is building communities around its journalism. The New York Times prioritizes commenters by placing them at the center of its homepage. Les équipes plateformes, nouvelles stars des rédactions. Fusion Gets a Tryout on Snapchat Discover. From AI and data science to cryptography: Microsoft researchers offer 16 predictions for ’16.

Ad blocking startup Shine claims global operator interest. What Is Disruptive Innovation? Using the blockchain to reinvent the music business. Can Wired Make Instagram Journalism Mainstream? Apple VP Eddy Cue on journalism. The mobile adblocking apocalypse hasn’t arrived (at least not yet) What do audiences really want from mobile news? The Guardian commits to 100 per cent guaranteed viewability. The rise of “homeless” media — Thoughts on Media. Glogin?URI= Google App Streaming: A Big Move In Building "The Web Of Apps" The Google-backed First Draft Coalition launches a site to help journalists verify social content. Yahoo escalates the war on ad-blockers — by keeping people out of their own e-mail.

I’d Like To Teach The World To Ad Block. Axel Springer Goes After iOS 9 Ad Blockers In New Legal Battle. WIRED Magazine To Debut Show On Netflix Next Year. A new site launches today, offering a place to explore the intersection of news and social media. Laventurier-du-big-data-502.