Wbkd/awesome-interactive-journalism: A list of awesome interactive journalism projects. Want to Attract More Readers? Try Listening to Them. Azure-blockchain-projects/bletchley-whitepaper.md at master · Azure/azure-blockchain-projects. State of the News Media 2016. This GIF Shows the Evolution of the Breaking News From Orlando. Times Insider delivers behind-the-scenes insights into how news, features and opinion come together at The New York Times. 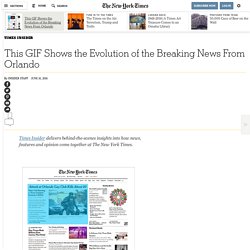 Photo When news breaks, editors must decide quickly how much coverage to give it. Is the story important? What are the broader implications? Will the situation get worse? In a digital age, new information comes quickly. Video news isn’t growing as fast as you’d think, and other surprising findings from a new global survey. This week, a Facebook executive suggested that your News Feed is likely to be “all video” in the next five years. 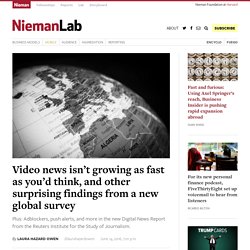 “We’re seeing a year-on-year decline on text. We’re seeing a massive increase, as I’ve said, on both pictures and video,” Nicola Mendelsohn said. “If I was having a bet, I would say: video, video, video.” But a new report out Tuesday from Oxford’s Reuters Institute for the Study of Journalism suggests that text may have a longer run, at least for news. Consumption of online news video is still a minority behavior around the world, the researchers found: Only about a quarter of respondents, across 26 countries, watched news video online in a given week. The Reuters Institute’s Digital News Report 2016 surveyed more than 50,000 people in those 26 countries, which include the U.S., Australia, Brazil, Japan, Canada, South Korea, and many European countries, about their digital news consumption. Le CSA se dote d’un laboratoire d’idées sur l’audiovisuel et le numérique : le CSA lab. Communiqué du mardi 14 juin 2016 Lancement du CSA lab, le 14 juin 2016 au CSA. 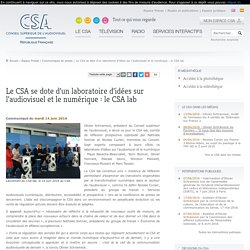 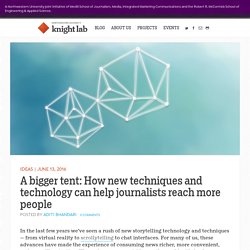 For many of us, these advances have made the experience of consuming news richer, more convenient, and more illuminating. We can learn more quickly, see the world with fresher eyes, and immerse ourselves in stories in ways that go far beyond text on a page or moving images. For those of us who create these stories, opportunities abound for us not only to do cool, new things, but also to bring our work to new people. With new storytelling and distribution techniques and technologies we can reach people who otherwise would have had a difficult time finding our work or accessing it because of government censorship, language barriers, limited technical resources, and more. At Knight Lab, we recently began asking ourselves how we can reach new and wider audiences with digital (and sometimes analog) news.

OutOfHoMedia: Ad block this. Publishers can challenge Google and Facebook if they form a network. At the top of the list of frustrations media organisations share is the accelerated pace of advertising revenue slipping through their fingers. 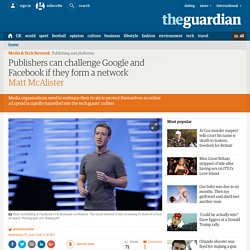 Mary Meeker’s latest internet trends report captures the story brilliantly in a single slide: Strategies for shifting from analog to digital media models seem too little too late already. Google and Facebook are having no problem creating more ways to attract advertisers and more share of spend, over 75% of it, while everyone else is struggling. Three major shifts in user behaviour are adding insult to injury: messaging is replacing web browsers, mobile is replacing desktop, and the adoption of adblockers continues apace. Media’s existential crisis is taking on new proportions. Sans titre. Everyone and their dogs are talking about Snapchat, an impressive feat given that it's a notoriously difficult app to explain. 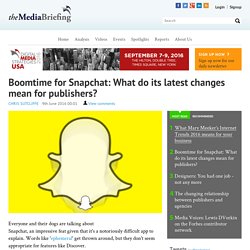 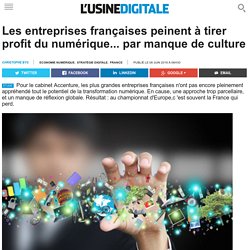 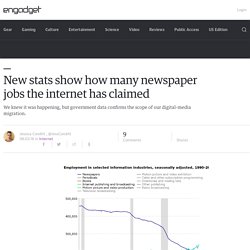 In this same time, the number of internet publishing and broadcasting jobs rose from 30,000 to 198,000. In just under three decades, the newspaper industry has transformed from a media juggernaut into a secondary form of communication, and there are no signs this trend will reverse any time soon. Most newspaper organizations have migrated online, including The Washington Post and The New York Times, where they tend to carry over traditional subscription models.

In August 2015, more than four years after launching a digital paywall program, The New York Times announced it had accumulated more than 1 million digital-only subscribers. However, its overall revenue continued to decline. The Bezos Effect: How Amazon’s Founder Is Reinventing The Washington Post – and What Lessons It Might Hold for the Beleaguered Newspaper Business. A new paper by Dan Kennedy, Joan Shorenstein Fellow (spring 2016) and associate professor in the School of Journalism at Northeastern University, provides insight into The Washington Post’s digital strategy and business model following its acquisition by Amazon founder and CEO Jeff Bezos. 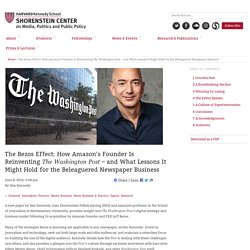 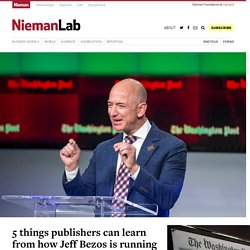 What happens when a 50-something journalist gets a week’s worth of news from Snapchat Discover? Snapchat wants to be a news source, so I spent the last week on a Snapchat-only diet. Selling subscriptions through Apple is getting better for publishers — but also for everyone else. Monday is Apple’s big day for software announcements at its annual WWDC conference, but we got an early peek at one of them at The Verge and Daring Fireball today — and it’s one that’ll be of interest to publishers. The Verge’s Lauren Goode: In a rare pre-WWDC sit-down interview with the The Verge, Phil Schiller, Apple’s senior vice president of worldwide marketing, said that Apple would soon alter its revenue-sharing model for apps. While the well-known 70/30 split will remain, developers who are able to maintain a subscription with a customer longer than a year will see Apple’s cut drop down to 15 percent.

Robot Art Raises Questions about Human Creativity. In July 2013, an up-and-coming artist had an exhibition at the Galerie Oberkampf in Paris. It lasted for a week, was attended by the public, received press coverage, and featured works produced over a number of years, including some created on the spot in the gallery. Altogether, it was a fairly typical art-world event. The only unusual feature was that the artist in question was a computer program known as “The Painting Fool.” One month in: What CNN has learned from Facebook Messenger bots. CNN has high hopes for Facebook Messenger bots. “Our vision is to be the worldwide leader in mobile and video news storytelling. Messaging apps are in many ways as important a growth platform as mobile has been,” said CNN svp and chief product officer Alex Wellen.

Facebook opened its Messenger platform last month, letting any business create chatbots to interact with the 900 million users on the app. Advertisement CNN was among the first publishers to launch a bot in April, which is available to its global audience. The Bot Power List 2016 — How We Get To Next. Science fiction is full of bots that hurt people. HAL 9000 kills one astronaut and tries to kill another in 2001: A Space Odyssey; Ava in Ex Machina expertly manipulates the humans she meets to try and escape her cell; the T-800 is known as The Terminator for obvious reasons. Even more common, though, are those bots clever and sentient enough to have real personality but undone through their naïveté — from Johnny Five in Short Circuit to the robotic cop in RoboCop, sci-fi is great at examining the dangers of greater intelligence when it’s open to manipulation or lacking concrete moral direction. A smarter bot, a more powerful bot, is also a bot that has more power to do evil things, and in the process expose human hubris.

These are all fictional examples, of course, but since we’re starting to see the tech industry shift its focus toward conversational bots as the future of, well, everything, maybe it offers us a useful way to define the power that a bot has. Facebook’s new DeepText AI categorizes everything you write. Quora. Google's Eric Schmidt attacks Europe's universities, tax polices, regulatory environment. Les 4 piliers de la transformation numérique - LK Conseil. Les 4 piliers de la transformation numérique. Why Video is Changing Everything for Traditional Media.

Facebook's director of product design on why websites may be a dying business. 2016 Internet Trends. Fusion will now emoji the news using Facebook Messenger. Fusion readers have plenty of options when it comes to reading or watching the publication’s stories. Amazon puts Alexa in the browser with Echosim.io.

Microsoft Garage Introduces News Pro 2.0 with New Bot Called Rowe. The latest update to News Pro adds a personal news agent called Rowe, an automated bot that will help you find news and perform other tasks within the app. Considering Microsoft Garage is a skunkworks division that works outside normal product teams to deliver services not suitable for normal Microsoft services, it is gathering pace. Robots have been about to take all the jobs for more than 200 years — Timeline. Peter Thiel, Tech Billionaire, Reveals Secret War With Gawker. Tech Titans Raise Their Guard, Pushing Back Against News Media. These Are The Biggest Skills That New Graduates Lack. Digital media layoffs continue, this time at VICE News – Poynter. New Media Shares Old Media's Roof - Bloomberg Gadfly. The New York Times of the future is beginning to take shape – Poynter.

New York Times Co. to Offer Buyouts to Employees. Washington Post targets Europe. Technology is changing how we live, but it needs to change how we work. Sans titre. A Big Shift Is Coming, and It Could Uber-ize Entire Industries. The Washington Post built a social network for its freelancers to better match skills to stories. Google met le paquet sur l’IA et rattrape son retard en VR. How the New York Times plans to conquer the world. Cover story: Does the front page of a magazine still matter? Vice's Shane Smith: 'Expect a bloodbath' in media within the next year. It’s 2016 and TV Execs Have Decided They Need a Digital Strategy.

Bots, explained: What is a bot, who’s making them, and why. BuzzFeed Slashes Revenue Forecast: Is This the Beginning of the End of the Millennial Media Bubble? The Digital Media Bloodbath: Hundreds Of Jobs Lost. BuzzFeed slashes forecasts after missing 2015 targets. Here are the important announcements for publishers at Facebook’s F8 keynote. Bots, the next frontier. Want to start a small data journalism team in your newsroom? Here are 8 steps. Boston Globe editor announces initiative to reinvent newspaper – Poynter.

What I Learned from Trying to Innovate at the New York Times. Prevention Magazine Takes Radical Step: No Print Ads. Can news publishers take on the tech giants at their own game? Why mobile designers must focus on creating 'micro-moments' Larry Summers: Data collection is the ultimate public good. Bots, the next frontier. Corporate Media Gatekeepers Protect Western 1% From Panama Leak - Craig Murray. Official Site - the UK's number one best-selling news and current affairs magazine, edited by Ian Hislop.