La tyrannie de la commodité. BlackRock’s Message: Contribute to Society, or Risk Losing Our Support. The climate disclosure proposal ultimately passed, and just last month Exxon agreed to publish climate impact reports. Perhaps even more notably, Exxon also changed its policy of non-engagement, and now permits meetings between shareholders and independent directors. BlackRock has even begun siding with activist investors themselves, something it hasn’t publicized. One of its funds voted in favor of the activist Nelson Peltz last year in his proxy fight with Procter & Gamble. It also voted in favor of Bill Ackman against ADP.

BlackRock voted in favor of activist-led proposals in 19 percent of proxy fights last year and that number is likely to rise. In a surprising twist, even activist investors are taking up social causes. The chief executive of Whole Foods, John Mackey, once referred to Jana as “greedy bastards” when the firm was attacking him. Mr. Despite Mr. The climate disclosure proposal ultimately passed, and just last month Exxon agreed to publish climate impact reports. Mr. Silicon Valley's Dumbest 'Inventions' of 2017. REDEF MediaSET: The Downside of Social Media and Devices. Silicon Valley is under attack. Here’s why we deserve it. A $700 juicer.

A delivery app that lets you pay $10 to get your $8 burrito faster. An app to valet your car. These are the kinds of innovation that Silicon Valley has recently poured billions into building. Our industry that once was lauded for bright, young talent taking on the world’s biggest problems now seems to be forgetting about the people that need solutions most. Over $160bn in venture capital are going into startups each year — and yet most of the new innovation is driven by the latest hype cycle, not the real problems we face. 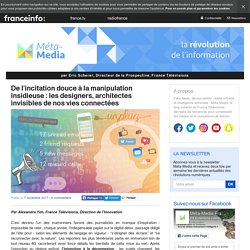 ORIZON - PREDICTIVE REAL ESTATE. Ashamed to work in Silicon Valley: how techies became the new bankers. When Danny Greg first moved to San Francisco to work at Github in 2012, he used to get high-fives in the street from strangers when he wore his company hoodie.

These days, unless he’s at an investor event, he’s cautious about wearing branded clothing that might indicate he’s a techie. He’s worried about the message it sends. Greg is one of many people working in tech who are increasingly self-conscious about how the industry – represented by consumer-facing tech titans like Google, Facebook, Amazon, Apple, Twitter and Uber – is perceived: as underregulated, overly powerful companies filled with wealthy tech bros and “brilliant assholes” with little regard for the local communities they occupy.

He stood on the roof of Facebook’s headquarters in Menlo Park with a virtual reality (VR) headset strapped to his face, and immersed himself in a flooded street 3,000 miles away. Zuckerberg was livestreaming the event to promote Facebook Spaces, a “social” VR app. But it backfired, badly. Pourquoi-toyota-veut-un-peu-s-eloigner-de-la-methode-kaizen-pour-developper-la-voiture-du-futur. Why should you buy a Bluetooth-enabled smart fork? Photo illustration by Slate. 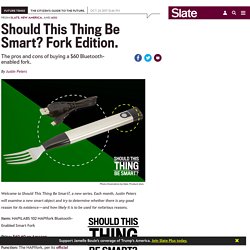 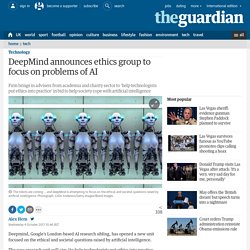 The new research unit will aim “to help technologists put ethics into practice, and to help society anticipate and direct the impact of AI so that it works for the benefit of all”, according to the company, which hit headlines in 2016 for building the first machine to beat a world champion at the ancient Asian board game Go. The company is bringing in external advisers from academia and the charitable sector, including Columbia development professor Jeffrey Sachs, Oxford AI professor Nick Bostrom, and climate change campaigner Christiana Figueres to advise the unit. “These Fellows are important not only for the expertise that they bring but for the diversity of thought they represent,” said the unit’s co-leads, Verity Harding and Sean Legassick, in a blogpost announcing its creation. 'Our minds can be hijacked': the tech insiders who fear a smartphone dystopia.

Justin Rosenstein had tweaked his laptop’s operating system to block Reddit, banned himself from Snapchat, which he compares to heroin, and imposed limits on his use of Facebook. 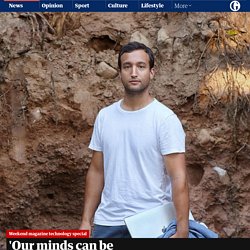 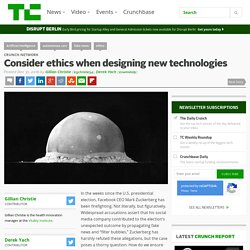 In the weeks since the U.S. presidential election, Facebook CEO Mark Zuckerberg has been firefighting. “Design Is Inherently An Unethical Industry” Have designers lost control of design? 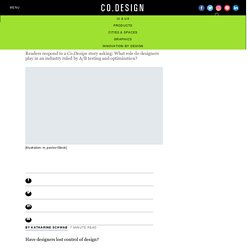 This was the question designer and technologist Matt Webb asked earlier this week in a story about the widening gap between designers and the products and interface they create. We asked readers to write in and share thoughts on the matter. Here are some of their responses. L’intrigant Noam Toran. The Frontiers of Impact – Good Tech Lab – Medium. Good Tech Lab is a research venture exploring the frontiers of impact. 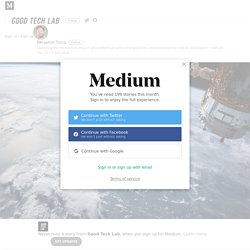 We believe that technology, entrepreneurship and financial innovation can help us tackle the world’s toughest challenges — like climate change, rapid urbanization, unsustainable food systems, or clean water shortages. I was trained as an IT engineer, then spent a few years in the corporate world before bootstrapping a think-tank and global network on new economies and open innovation. Here, I explored themes like blockchains and ICOs, circular economy for smart cities, impact investing and hardware for good. Wikiwand. The Uncomfortable - a collection of deliberately inconvenient objects. This Breakthrough Tool Detects Racism And Sexism In Software. Last year, Amazon was figuring out where it should offer free same-day delivery service to reach the greatest number of potential Prime customers.

Un nom qui en dit long sur ce que l’on peut trouver dans ce musée. Broadcast Yourself. Another Lens - News Deeply x Airbnb.Design. Does the world need a wireless water bottle with a game to remind kids to drink? / Boing Boing. Roomba walks back plan to sell maps of your house to Amazon and Google Last week, Reuters published an interview with Irobot CEO Colin Angle, in which the Roomba-czar explained his plan to have his cleaning robots produce detailed maps of your house that the company would sell to Amazon and Google, something the company could do today, thanks to an exceptionally broad and one-sided terms of service that […] Philosopher Andrew Taggart is helping Silicon Valley executives define success — Quartz.

Silicon Valley is obsessed with happiness. The pursuit of a mythical good life, achievement blending perfectly with fulfillment, has given rise to the quantified self movement, polyphasic sleeping, and stashes of off-label pharmaceuticals in developers’ desks. Yet Andrew Taggart thinks most of this is nonsense. A PhD in philosophy, Taggart practices the art of gadfly-for-hire. He disabuses founders, executives, and others in Silicon Valley of the notion that life is a problem to be solved, and happiness awaits those who do it. Indeed, Taggart argues that optimizing one’s life and business is actually a formula for misery. “I call it “the problematization of the world,” he said. Du design thinking au design éthique : redonner du sens à l’innovation - Mais où va le Web. This Is How Your Fear and Outrage Are Being Sold for Profit. One evening in late October 2014, a doctor checked his own pulse and stepped onto a subway car in New York City. He had just returned home from a brief stint volunteering overseas, and was heading to Brooklyn to meet some friends at a bowling alley.

He was looking forward to this break — earlier that day he had gone for a run around the city, grabbed coffee on the High Line, and eaten at a local meatball shop. When he woke up the next day exhausted with a slight fever, he called his employer. Within 24 hours, he would become the most most feared man in New York. His exact path through the city would be scrutinized by hundreds of people, the establishments he visited would be shuttered, and his friends and fiancée would be put into quarantine. Dr. Network Effect. Network Effect explores the psychological effect of Internet use on humanity. Like the Internet itself, the project is effectively endless, containing 10,000 video clips, 10,000 spoken sentences, news, tweets, charts, graphs, lists, and millions of individual data points, all presented in a classically-designed data visualization environment. To see and hear it all would take hours, but the viewing window is limited to around seven minutes (according to the average life expectancy in the viewer’s country), which induces a state of anxiety, triggers a fear of missing out, and totally frustrates any attempt at completeness.

The videos activate our voyeurism, the sound recordings tempt us with secrets, and the data promises a kind of omniscience, but all of it is a mirage — there is no one here to watch, there is no secret to find, and the data, which seems to be so important, is actually absurd. The Internet is a miraculous tool, but all too often, it affects us like a drug. Can’t Put Down Your Device? That’s by Design - The New York Times. Juicero : des limites de l’innovation spéculative. Juicero : des limites de l’innovation spéculative. Does the world need a wireless water bottle with a game to remind kids to drink? / Boing Boing. We put a chip in it! John Maeda sur la simplicité.