Being an Atheist! :) Vaisnavadale. Third Wheel Project. Firefly Music, Lyrics, Songs, and Videos. YouTube. TUBE+ Watch full length TV Shows and Movies online for free. Daily science + art = inspiration. Talks. Sam Harris. Carl Sagan Collection. Since its creation in 1976, the Committee for Skeptical Inquiry (formerly known as CSICOP - the Committee for the Scientific Investigation of Claims of the Paranormal) has been honored by its association with founding member Carl Sagan, David Duncan Professor of Astronomy and Space Sciences and the Director of the Laboratory for Planetary Studies at Cornell University, Pulitzer Prize-winning author, Peabody-winning television producer, and recipient of the National Academy of Science’s highest honor, the Public Welfare Medal. 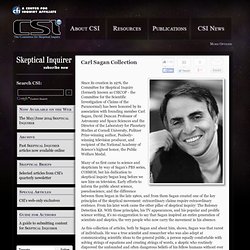 Many of us first came to science and skepticism by way of Sagan’s PBS series, COSMOS, but his dedication to skeptical inquiry began long before we saw him on television. Early efforts to inform the public about science, pseudoscience, and the difference between them began in the late 1960s, and from them Sagan created one of the key principles of the skeptical movement: extraordinary claims require extraordinary evidence. Skeptical Inquirer Carl Sagan — Google Books. 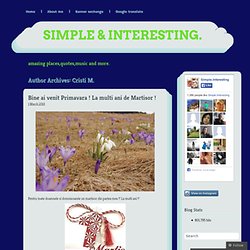