Witchcraft Trials. What Is Witchcraft? What really happened during the Salem Witch Trials - Brian A. Pavlac. Wood Witchcraft. Witch Trial illustration. Witch Punishment. Witch on trial. Witchcraft in Salem [ushistory.org] George Jacobs Sr. and his granddaughter Margaret were both accused of witchcraft, but Margaret managed to escape harm by claiming that Grandpa was indeed a witch. 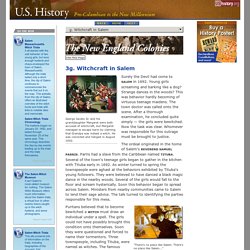 He was convicted and hanged in August 1692. Surely the Devil had come to Salem in 1692. Young girls screaming and barking like a dog? Strange dances in the woods? This was behavior hardly becoming of virtuous teenage maidens. The ordeal originated in the home of Salem's Reverend Samuel Parris. "There's no place like Salem. Puritans believed that to become bewitched a witch must draw an individual under a spell. Evidence admitted in such trials was of five types.

Second, physical evidence was considered. Witness testimony was a third consideration. Fourth was spectral evidence. The Trial of Rebecca Nurse Last was the confession. As 1692 passed into 1693, the hysteria began to lose steam. No one knows the truth behind what happened in Salem. Report broken link. Witchcraft. Witchcraft, the exercise or invocation of alleged supernatural powers to control people or events, practices typically involving sorcery or magic. Although defined differently in disparate historical and cultural contexts, witchcraft has often been seen, especially in the West, as the work of crones who meet secretly at night, indulge in cannibalism and orgiastic rites with the Devil, and perform black magic. Witchcraft thus defined exists more in the imagination of contemporaries than in any objective reality. Yet this stereotype has a long history and has constituted for many cultures a viable explanation of evil in the world. The intensity of these beliefs is best represented by the European witch hunts of the 14th to 18th century, but witchcraft and its associated ideas are never far from the surface of popular consciousness and—sustained by folk tales—find explicit focus from time to time in popular television and films and in fiction. Meanings Sorcery Jeffrey Burton Russell. An Acte against Conjuration Witchcrafte and dealing with evill and wicked Spirits (1604) 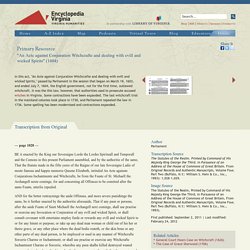 Witchcraft and Voodoo. Voodoo and Witchcraft are the two most misunderstood religions in the world. 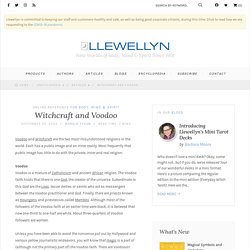 Each has a public image and an inner reality. Most frequently that public image has little to do with the private, inner and real religion. VoodooVoodoo is a mixture of Catholicism and ancient African religion. The Voodoo faith holds that there is one God, the creator of the universe. Subordinate to this God are the Loas, lesser deities or saints who act as messengers between the Voodoo practitioner and God. Unless you have been able to avoid the nonsense put out by Hollywood and various yellow journalistic endeavors, you will know that magic is a part of (although not the primary part of) the Voodoo faith.

Witches and Witchcraft - The Crucible. Witches And Witchcraft During the late seventeenth century in New England colonies, witches were perceived very negatively. 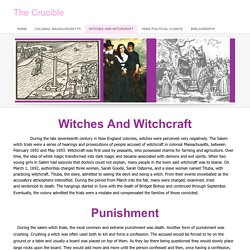 The Salem witch trials were a series of hearings and prosecutions of people accused of witchcraft in colonial Massachusetts, between February 1692 and May 1693. Witchcraft was first used by peasants, who possessed charms for farming and agriculture. Over time, the idea of white magic transformed into dark magic and became associated with demons and evil spirits. When two young girls in Salem had seizures that doctors could not explain, many people in the town said witchcraft was to blame. Punishment. Witches: Real Origins, Hunts & Trials. Witches were perceived as evil beings by early Christians in Europe, inspiring the iconic Halloween figure. 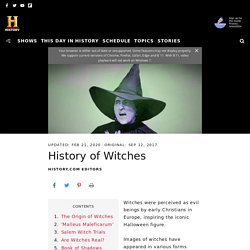 Images of witches have appeared in various forms throughout history—from evil, wart-nosed women huddling over a cauldron of boiling liquid to hag-faced, cackling beings riding through the sky on brooms wearing pointy hats. In pop culture, the witch has been portrayed as a benevolent, nose-twitching suburban housewife; an awkward teenager learning to control her powers and a trio of charmed sisters battling the forces of evil. The real history of witches, however, is dark and, often for the witches, deadly. The Origin of Witches Early witches were people who practiced witchcraft, using magic spells and calling upon spirits for help or to bring about change. It’s unclear exactly when witches came on the historical scene, but one of the earliest records of a witch is in the Bible in the book of 1 Samuel, thought be written between 931 B.C. and 721 B.C. 'Malleus Maleficarum' Sources. 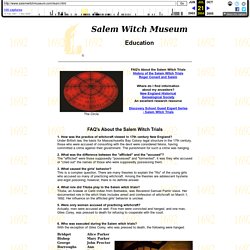 New England Historical Genealogical Society An excellent research resource (the above links will open a new browser window that you may close to return to this site) More Questions?