The Witch: the facts behind the folktales. From The Wizard of Oz to Harry Potter, Macbeth to Bewitched, witches have long been a part of popular culture. 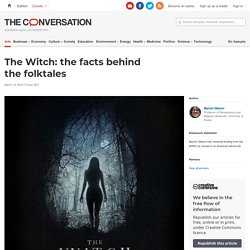 Witches are now regularly presented as cuddly feminists, but Robert Eggers’s new film The Witch: A New England Folktale vividly reminds us of the horrors lurking behind the fantasy. The is a horrifying tale of 17th-century New England, where witches roam the deep, dark forest kidnapping settlers’ children so they can boil down their fat and bones for ointments which help them to fly. Witches were said to be able to fly on broomsticks, perhaps because the broom was a symbol of female domestication, and flying on it was the ultimate rebellion.

6 Types of Witches From Around the World. By Rebecca Deczynski Throughout decades of pop cultural assimilation, the witch has become a highly recognizable—and highly stereotyped—figure in the American mindset. 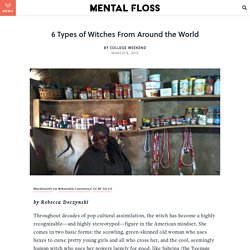 She comes in two basic forms: the scowling, green-skinned old woman who uses hexes to curse pretty young girls and all who cross her, and the cool, seemingly human witch who uses her powers largely for good, like Sabrina (the Teenage Witch) or Samantha from Bewitched. At the same time, thanks to U.S. history classes and historical fiction, the American witch has been recognized for her tragic history—not just her vibrant narratives. Bet You Didn't Know: Witches. Salem Witch Trials - Facts & Summary. Labeling Women Witches Remains a Powerful Tool for Social Stigmatization.

Even leading scientists are surprised by the current prevalence of witchcraft beliefs, which should not be confused with the contemporary nature-based Wicca pagan religion that focuses on benevolence. 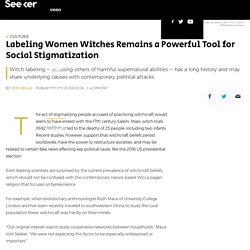 For example, when evolutionary anthropologist Ruth Mace of University College London and her team recently traveled to southwestern China to study the rural population there, witchcraft was hardly on their minds. "Our original interest was to study cooperative networks between households," Mace told Seeker. European witchcraft – Faust.

Euro Witch The origins of witchcraft in Britain and Europe are vague, extending into pre-history, and probably back to the first human communities when individuals first attempted to conjure nature and discovered the power they gained over others. 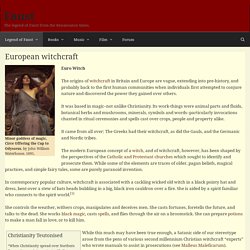 It was based in magic–not unlike Christianity. Its work-things were animal parts and fluids, botanical herbs and mushrooms, minerals, symbols and words–particularly invocations chanted in ritual ceremonies and spells cast over crops, people and property alike. The Salem Witch Trials (1692) Cartoon. Witch Hunts Today: Abuse of Women, Superstition and Murder Collide in India. Men circled the three women, their fists wrapped around thick iron pipes and wooden sticks. 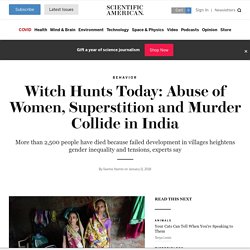 The women huddled on the ground at the center of their village in the western Indian state of Gujarat and whimpered as the crowd gathered. Two young men had died in the village, and the women were being called dakan, the Gujarati word for witch. They were accused of feasting on the young men’s souls. Why are women accused of witchcraft? Study in rural China gives clue. From medieval witch hunts in Europe to contemporary “witch doctors” in Tanzania, belief in witchcraft has existed across human societies throughout history. 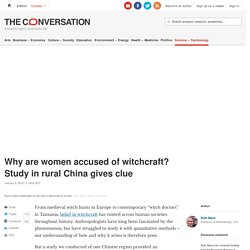 Anthropologists have long been fascinated by the phenomenon, but have struggled to study it with quantitative methods – our understanding of how and why it arises is therefore poor. But a study we conducted of one Chinese region provided an opportunity to test the most common hypothesis – that witchcraft accusations act as punishment for those who do not cooperate with local norms. According to this theory, witch tags mark supposedly untrustworthy individuals and encourage others to conform out of fear of being labelled. However, some empirical studies have shown that witch labelling instead undermines trust and social cohesion in a society. Our study is based on 800 households in five villages in south-western China. Magic poison. Witchcraft belief is a curse on Africa. BBC News - Healing rituals and bad spirits on a Philippine island.

4 February 2012Last updated at 12:00 By Kate McGeown BBC News, Philippines Islanders gather earth and dust to use in rituals to protect their homes Siquijor is one of more than 7,000 islands in the Philippines - it has tropical sun, white sand and an azure sea, but it is also famous for witchcraft. 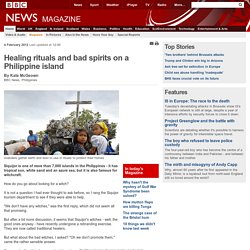 How do you go about looking for a witch? It is not a question I had ever thought to ask before, so I rang the Siquijor tourism department to see if they were able to help. "We don't have any witches," was the first reply, which did not seem all that promising. But after a bit more discussion, it seems that Siquijor's witches - well, the good ones anyway - have recently undergone a rebranding exercise. But what about the bad witches, I asked? <div class="warning"><img class="holding" src="//news.bbcimg.co.uk/media/images/58295000/jpg/_58295591_jex_1310971_de27-1.jpg" alt="Consing Achay treats the BBC&#039;s Kate McGeown" /><p><strong>Please turn on JavaScript. Listen online or download the podcast. National Geographic Witchcraft Myths and Legends 1 of 2 Witchcraft 18. TOP 10 WITCH STORIES From Mythology. The history of witches in Britain. National Geographic. Travelers in Search of Mexico’s Magic Find Town of Witches and Warlocks.