Sans titre. The Evolution of Trust. Idiopathic Mutual Irritation. Have you ever found someone to be really irritating, for example a co-worker, boss, or neighbor – but that person says that you’re the problem? 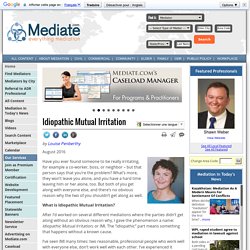 What’s more, they won’t leave you alone, and you have a hard time leaving him or her alone, too. But both of you get along with everyone else, and there’s no obvious reason why the two of you shouldn’t get along as well. What is Idiopathic Mutual Irritation? After I’d worked on several different mediations where the parties didn’t get along without an obvious reason why, I gave the phenomenon a name: Idiopathic Mutual Irritation, or IMI. The “idiopathic” part means something that happens without a known cause. Conflicts of Interest. I’m lucky that I’ve had so much training and experience in mediating issues between others. 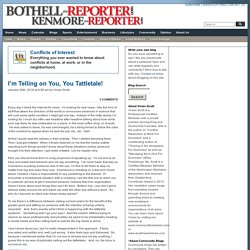 It’s impossible to be a part of the mediation community and not learn a thing or two about oneself in the process. So, today I’m going to share, in no particular order of importance, ten things I’ve learned along the way. 1) Gossip is boring. I don’t mind people sharing updates about family or friends with me, but when it turns into a conversation that has too many oohs, ahs, and smirky faces, I’m out. 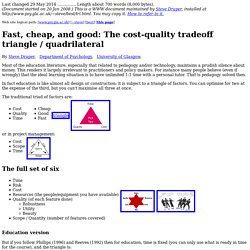 Length about 700 words (8,000 bytes). (Document started on 20 Jan 2008.) This is a WWW document maintained by Steve Draper, installed at You may copy it. How to refer to it. Web site logical path: [www.psy.gla.ac.uk] [~steve] [best] [this page] By Steve Draper, Department of Psychology, University of Glasgow. Most of the education literature, especially that related to pedagogy and/or technology, maintains a prudish silence about money. In fact education is like almost all design or construction: it is subject to a triangle of factors. The traditional triad of factors are: or in project management: The full set of six Education version But if you follow Phillips (1996) and Reeves (1992) then for education, time is fixed (you can only use what is ready in time for the course), and the triangle is: Cost (on budget?) 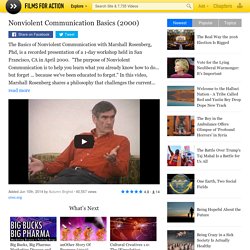 "The purpose of Nonviolent Communication is to help you learn what you already know how to do... but forget ... because we've been educated to forget. " In this video, Marshall Rosenberg shares a philosophy that challenges the current paradigm of war that contributes to violence in relationships, society, and to our planet. "Even though we could be playing the game, 'Make Life Wonderful,' we have been educated to play another game: 'Who's Right? '" Marshall presents ways of interacting with each other in authentic, effective, and powerful ways so that the way we interact in our most personal relationships is aligned with our values for the change we want to see in the world.

Transformative Mediation Techniques - Science Confirms their Benefits! - Institute for the Study of Conflict Transformation. Good research about mediation techniques has been hard to find. 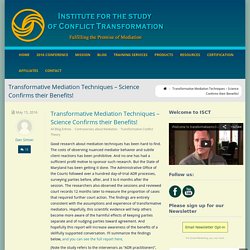 The costs of observing nuanced mediator behavior and subtle client reactions has been prohibitive. And no one has had a sufficient profit motive to sponsor such research. But the State of Maryland has been getting it done. The Administrative Office of the Courts followed over a hundred day-of-trial ADR processes, surveying parties before, after, and 3 to 6 months after the session. The researchers also observed the sessions and reviewed court records 12 months later to measure the proportion of cases that required further court action. (Note the study refers to the intervenors as “ADR practitioners”, not as “Mediators”. Mieux communiquer tout simplement. Les malentendus et les justifications sont non seulement éprouvantes mais peuvent aussi rendre malade. 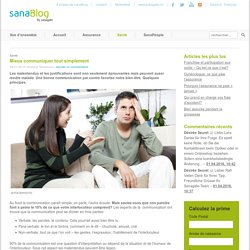