The Evolution of Trust 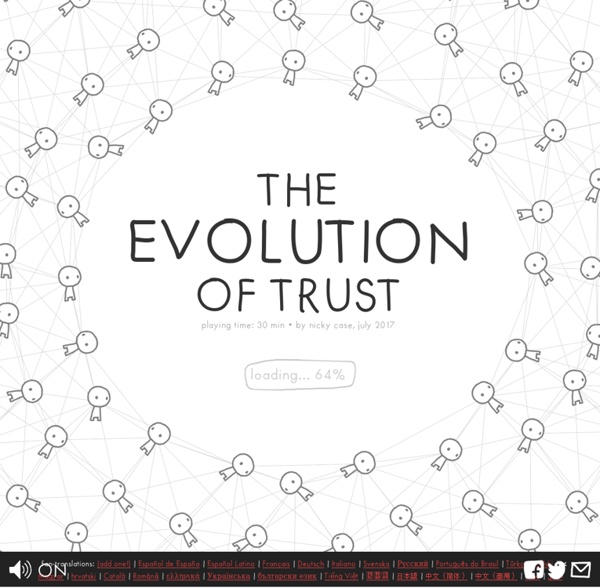 7 Actively Engaging Ways of Developing Critical Thinking Skills We talk to many educators in our travels. Everywhere we go, we ask what they feel are the most important skills for modern learners. Teachers, school leaders, and educators of all kinds have many shared goals. No matter where they hail from, one of the most common among them is effectively developing critical thinking skills.

Visualizing Incomplete and Missing Data We love complete and nicely formatted data. It means we spend less time restructuring and poking at a sparse dataset and more quickly get to the visualization, analysis, and insights. It’s why I like to work with Census data so much. Psychologists Turn Conservatives Into Liberals With One Strange Thought Experiment Studies have consistently shown that turning liberals into conservatives (at least temporarily) is surprisingly easy. All you need to do is scare them. For example, one group of experimenters asked students to think about their own death before taking tests designed to assess their political beliefs. Over several experiments, the researchers, from the University of Central Arkansas, found that when the participants had been asked to think about their own death they became more conservative, and had attitudes in line with their conservative classmates on issues from capital punishment and abortion, to rights for gay employees. The theory goes that the liberal students became much more socially conservative than the control group (who thought about television) because thinking about their own death made them feel vulnerable. Now researchers have discovered an easy way to do the reverse – turn conservatives into liberals.

Surgeon's Knot One-Hand Tie Cool Trick This technique is useful for anyone in medical school, vets, anyone studying surgery, or in emergency situations in the field. This can also be applied to camping and fishing, paracord tying and as a cool trick to show your friends! As always, use CAUTION and be careful, especially if actually suturing, as it should only be by authorized licensed health-care personnel. The video breaks it down but you may have to watch it a few times while following along. Idiopathic Mutual Irritation Have you ever found someone to be really irritating, for example a co-worker, boss, or neighbor – but that person says that you’re the problem? What’s more, they won’t leave you alone, and you have a hard time leaving him or her alone, too. But both of you get along with everyone else, and there’s no obvious reason why the two of you shouldn’t get along as well. What is Idiopathic Mutual Irritation?

Thinking Routines in the Classroom Today Karen Voglesang @NBCTchr teaches children to use thinking routines in her classroom. After participating in Harvard’s Project Zero, she is applying and using the methods in classrooms and with teachers. Learn some thinking routines and how to apply these valuable techniques in your classroom. Karen was the 2015 Tennessee State Teacher of the Year and I interviewed her at the NNSTOY Conference in DC this summer. Listen Now

Visualizing Outliers Visualizing data that looks like it came straight out of Statistics 101 text book is nice and all — for teaching and learning purposes. You gotta learn to stand before you can run a marathon. Once you’re ready for the real data though, which is fuzzier and more irregular, you run into data points that don’t quite fit in with the rest. The outliers. There are various ways to incorporate outliers into your visualization, but you have to understand them first. Why is the outlier there in the first place?

At Yale, we conducted an experiment to turn conservatives into liberals. The results say a lot about our political divisions. (Getty Images) When my daughter was growing up, she often wanted to rush off to do fun things with her friends — get into the water at the beach, ride off on her bike — without taking the proper safety precautions first. I’d have to stop her in her tracks to first put on the sunscreen, or her bike helmet and knee pads, with her standing there impatiently. “Safety first, fun second,” was my mantra. Keeping ourselves and our loved ones safe from harm is perhaps our strongest human motivation, deeply embedded in our very DNA.