Panama Papers: John Doe's Manifesto. Income inequality is one of the defining issues of our time. 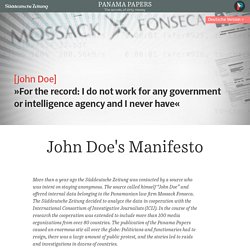 It affects all of us, the world over. The debate over its sudden acceleration has raged for years, with politicians, academics and activists alike helpless to stop its steady growth despite countless speeches, statistical analyses, a few meagre protests, and the occasional documentary. Still, questions remain: why? Cash Impact – Les nouvelles révélations des Panama Papers.

The Risks Digest Volume 29: Issue 44. Forum on Risks to the Public in Computers and Related Systems ACM Committee on Computers and Public Policy, Peter G. 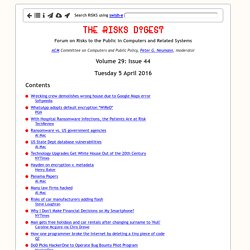 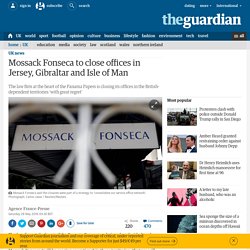 Mossack Fonseca “will be ceasing operations” in those territories, “but we will continue serving all of our clients”, it said. “This decision has been taken with great regret, as Mossack Fonseca has had a presence in these locations for more than 20 years,” the Panama-based law firm added. The office closures were part of a strategy to “consolidate our service office network,” it said. The Market Punished “Panama Papers” Firms to the Tune of $230 Billion. Since they were first published on April 3, the Panama Papers have thrust a spotlight onto world politicians, celebrities, and businesses sheltering money offshore. 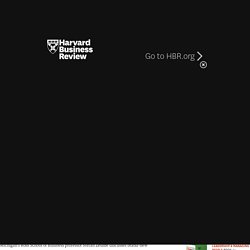 The largest release of data ever on the secret world of offshore companies led to the resignation of Iceland’s prime minister. It also created an academic windfall: the opportunity to study the real financial impact of offshore vehicles. In this interview with senior editor Curt Nickisch, University of Michigan’s Ross School of Business professor Stefan Zeume discusses brand-new research resulting from the unexpected opportunity, and what he and his coauthors found: billions of dollars in lost market capitalization. When did did you and your coauthors realize that the forced transparency of the Panama Papers could help you answer questions you’ve longed to answer?

It was a Sunday when the news came out, and that day we started exchanging emails, and then set up a Skype call. City says ‘no surprise’ as more law firms named in Panama Papers leak. The head of the City of London Law Society (CLLS) has said there may be ‘perfectly good reasons’ why a number of City law firms are named as intermediaries to offshore entities in the latest Panama Papers leak. 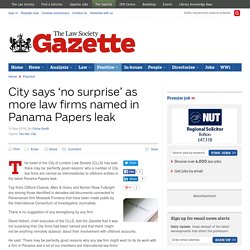 Top firms Clifford Chance, Allen & Overy and Norton Rose Fulbright are among those identified in decades-old documents connected to Panamanian firm Mossack Fonseca that have been made public by the International Consortium of Investigative Journalists. There is no suggestion of any wrongdoing by any firm. David Hobart, chief executive of the CLLS, told the Gazette that it was not surprising that City firms had been named and that there ‘might not be anything remotely dubious’ about their involvement with offshore accounts. He said: ‘There may be perfectly good reasons why any law firm might want to do its work with a firm in Panama and a lot of our members are international law firms.’ Panama Papers: On the Run with Fugitive Gambling Czar Calvin Ayre. NBC News has learned that the Panama Papers expose some of the secret financial dealings of one of America's most wanted fugitives -- a flamboyant Internet gambling tycoon who has used a web of offshore companies to stay one step ahead of authorities while thumbing his nose at them, flaunting his luxe lifestyle and hiding millions of dollars in illicit loot. 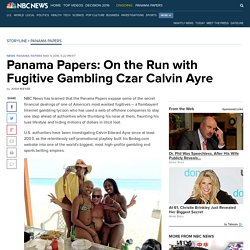 U.S. authorities have been investigating Calvin Edward Ayre since at least 2003, as the relentlessly self-promotional playboy built his Bodog.com website into one of the world's biggest, most high-profile gambling and sports betting empires. Ayre made the cover of Forbes magazine as the first billionaire impresario of the online gambling world, landed on People magazine's "Hottest Bachelors" list and took "MTV Cribs" on a long, televised tour of his over-the-top, $3.5 million estate in Costa Rica. "Long Weekend, Antigua Style" Authorities have put many of the perpetrators out of commission. Three arrested amid Panama Papers insider trade inquiry. UPDATE Panama Papers: King of Saudi Arabia accused of secretly donating $80M to Netanyahu's Israeli election campaign / Boing Boing. Update: Opposition Labour leader Isaac Herzog, identified in the original article as the source accusation denies having made the accusation; and called the websites claiming he did "unsane. 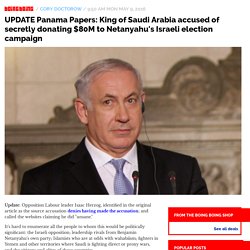 " It's hard to enumerate all the people to whom this would be politically significant: the Israeli opposition; leadership rivals from Benjamin Netanyahu's own party; Islamists who are at odds with wahabiism; fighters in Yemen and other territories where Saudi is fighting direct or proxy wars, and the citizens and elites of those countries. “In March 2015, King Salman has deposited eighty million dollars to support Netanyahu’s campaign via a Syrian-Spanish person named Mohamed Eyad Kayali. The money was deposited to a company’s account in British Virgin Islands owned by Teddy Sagi, an Israeli billionaire and businessman, who has allocated the money to fund the campaign Israeli Prime Minister Benjamin Netanyahu”, Herzog cited a leaked Panama Paper. 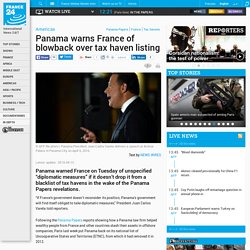 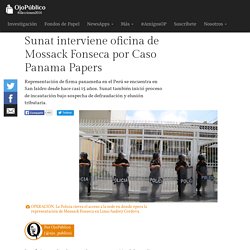 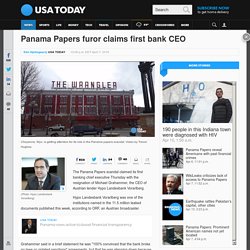 Cheyenne, Wyo. is getting attention for its role in the Panama papers scandal. Panama vows action to boost financial transparency. Play Video Play Fullscreen These politicians have links to the Panama Papers This is a modal window. Error Code: PLAYER_ERR_NO_SRC Here are 12 of the 140 politicians worldwide who have been linked to Mossack Fonseca either directly or by association. President Juan Carlos Varela vowed late Wednesday to take swift action to improve financial transparency in the Central American country following leaks that showed Panama-based law firm Mossack Fonseca helped some clients avoid taxes and international sanctions. In a nationally televised address from Panama City, Varela said his government was examining ways to restore confidence in Panama's financial industry amid revelations that the law company may have helped wealthy and powerful people commit financial crimes.

He said his government would establish an independent commission to strengthen transparency and work closely with international organizations and investigators. “People do make mistakes. The Panama Papers and Implications for Cyber Security in Law Firms. Mossack Fonesca HQ Raided - Panama Papers. Mossack Fonesca HQ Raided Mossack Fonseca HQ has been raided last night without any notice. This is not the first time as their local offices has been raided last week as well as they seized documents from their offices. Mossack Fonseca still denies any wrongdoing and claims their were a victim of the hack and acted within the law. The aim of this raid, as described by the attorney was “to obtain documentation linked to the information published in news articles that establish the use of the firm in illicit activities”. Their offices were surrounded by the police and a crime unit whilst officials went inside to seize the documents.

They were able to do this without interference from Mossack Fonseca. Furthermore, this raid does not stop here as they are also planning to investigate and search the other subsidiaries of Mossack Fonseca. The law firm went on to post on Twitter that M.F ” continues to co-operate with authorities in investigations made at our headquarters” Consider the Panama Papers breach a warning. An MIT conference this week about the Internet of Things was fun until the topic of security came up. The audience stilled and focused at the mention. Sanjay Sarma, a professor of mechanical engineering at MIT, told this mostly startup crowd that he expects "a few disasters.

" Ending tax havens up to US and Europe: Panama Papers reporters. Getting rid of tax havens depends on the United States and Europe, but is unlikely to happen anytime soon, journalists behind the publication of the Panama Papers said Friday. "The biggest tax haven in the world today is probably in the United States," Jake Bernstein, a US investigative reporter with the International Consortium of Investigative Journalists (ICIJ), told a conference in Panama hosted by anti-corruption watchdog Transparency International.

La constitution d’une société offshore n’est pas en soi nécessairement répréhensible. L’est-elle souvent ? Qu’est-ce qu’une société offshore ? Panama Papers: How the rich try to hide assets from their exes - Apr. 7, 2016. A report by the International Consortium of Investigative Journalists has shone a light on how some of the super rich around the world use secret offshore accounts and other tricks to keep their wealth hidden. "The Panama revelations... will almost certainly drive some people to create new and more complicated vehicles which may ultimately make it more difficult to identify the assets they contain in a divorce case," said Marilyn Stowe, a senior partner at Stowe Family Law, and a top divorce lawyer in the U.K. Stowe, who has worked on a number of "big money" cases, said that in England both parties have a duty to fully disclose their assets during divorce proceedings.

"But this does not always stop someone very wealthy with assets offshore who is determined to make life as difficult as possible for a spouse," she said. "It is not unknown for a party to fail to disclose an interest in an offshore asset at all. " Reports: Panama firm usurped name of Red Cross to hide money. PARIS (AP) — The law firm at the center of the Panama offshore accounts scandal routinely usurped the name of the Red Cross and other charities to help obscure the origin of millions of dollars in questionable funds, two newspapers involved in the investigation reported Sunday.

There's no suggestion that the charitable groups had any idea their name was being used in this way. International Committee of the Red Cross spokeswoman Claire Kaplun told The Associated Press on Sunday that the revelation was "a total surprise and something we find extremely shocking. " France's Le Monde and Switzerland's Le Matin Dimanche said Mossack Fonseca created dummy foundations with high-minded names such as the "Faith Foundation" to hold shares in around 500 offshore companies.

OCCRP is the only full-time investigative reporting organization that specializes in organized crime and corruption. It publishes its stories through local media and in English and Russian through its website. OCCRP is an early practitioner of collaborative, cross-border investigative journalism by non-profit journalism organizations, an approach that is gaining recognition in the United States and now Europe. Shots Fired: Wikileaks Accuses Panama Papers' Leaker Of Being "Soros-Funded, Soft-Power Tax Dodge" How Reporters Pulled Off the Panama Papers, the Biggest Leak in Whistleblower History.

Click to Open Overlay Gallery When Daniel Ellsberg photocopied and leaked the Pentagon Papers to the New York Times in 1971, those 7,000 pages of top secret Vietnam War documents represented what was then the biggest whistleblower leak in history—a couple dozen megabytes if it were contained in a modern text file. Almost four decades later, WikiLeaks in 2010 published Cablegate, a world-shaking, 1.73 gigabyte collection of classified State Department communications that was almost a hundred times bigger. If there’s some Moore’s Law of Leaks, however, it seems to be exponential. Fallout From Panama Papers Echoes Around The World. Updated at 8:10 p.m. The Panama Papers — Biggest leak in History Exposes Global Corruption.

Panama Papers - All articles by Süddeutsche Zeitung. How Mass Media is Spinning the "Panama Papers" to the Elite's Advantage - The Vigilant Citizen - Symbols Rule the World. France 'wrong' to designate Panama as a tax haven: president. The Panama Papers Could Really End Hillary Clinton's Campaign. The Law Firm That Works with Oligarchs, Money Launderers, and Dictators.

Spies and Shadowy Allies Lurk in Secret With Help From Offshore Firm · ICIJ. Mossack Fonseca’s Willful Ignorance. Mossack Fonseca worked with oil firms owned by Iranian state despite sanctions. HSBC bank 'helped clients dodge millions in tax' I investigated Mossack Fonseca before the Panama Papers came out - and it taught me a lot about journalism. Panamanians pained by corruption claims.