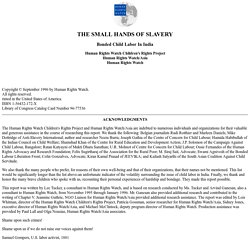 We thank the following: Belgian journalists Rudi Rotthier and Marleen Daniels; Mike Dottridge of Anti-Slavery International; author and researcher Neera Burra; Joseph Gathia of the Centre of Concern for Child Labour; Hamida Habibullah of the Indian Council on Child Welfare; Shamshad Khan of the Centre for Rural Education and Development Action; J.P. Evolution of the Australian Industry.

Australia's economic development has been one of contrast and change. 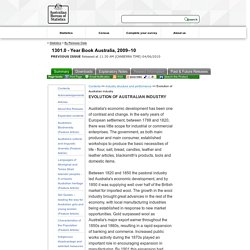 In the early years of European settlement, between 1788 and 1820, there was little scope for industrial or commercial enterprises. The government, as both main producer and main consumer, established workshops to produce the basic necessities of life - flour, salt, bread, candles, leather and leather articles, blacksmith's products, tools and domestic items. Between 1820 and 1850 the pastoral industry led Australia's economic development, and by 1850 it was supplying well over half of the British market for imported wool. The growth in the wool industry brought great advances in the rest of the economy, with local manufacturing industries being established in response to new market opportunities. Gold surpassed wool as Australia's major export earner throughout the 1850s and 1860s, resulting in a rapid expansion of banking and commerce. Australia Unemployment Rates. Decent Work Australia. Decent Work is an internationally recognised goal to provide good jobs for all. 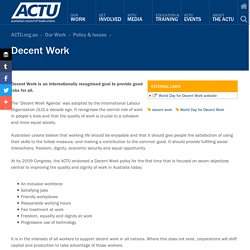 The ‘Decent Work Agenda’ was adopted by the International Labour Organization (ILO) a decade ago. It recognises the central role of work in people’s lives and that the quality of work is crucial to a cohesive and more equal society. Australian unions believe that working life should be enjoyable and that it should give people the satisfaction of using their skills to the fullest measure, and making a contribution to the common good. India - Decent Work Country Programme 2013-2017. Rights for Domestic Workers » United Nations in India. Coinciding with the World Day for Social Justice on 20 February, the Employment and Social Protection Task Team, led by ILO, launched joint advocacy and communication on the theme of Rights for Domestic Workers in February 2014. 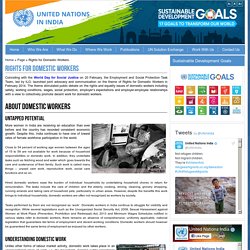 The theme stimulated public debate on the rights and equality issues of domestic workers including safety, working conditions, wages, social protection, employer’s expectations and employer-employee relationships with a view to collectively promote decent work for domestic workers. More women in India are receiving an education than ever before and the country has recorded consistent economic growth.

Despite this, India continues to have one of lowest rates of female workforce participation in the world. Gender Equity Issues in India. Gender discrimination continues to be an enormous problem within Indian society. 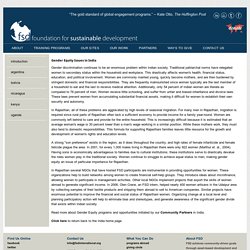 Traditional patriarchal norms have relegated women to secondary status within the household and workplace. This drastically affects women's health, financial status, education, and political involvement. Women are commonly married young, quickly become mothers, and are then burdened by stringent domestic and financial responsibilities. Child Labour (Prohibition and Regulation) Act 1986. The Child Labour (Prohibition and Regulation) Act, 1986 is one the most debated acts regarding children in India. 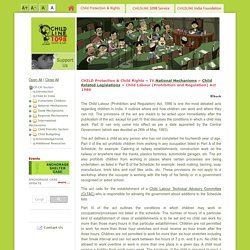 It outlines where and how children can work and where they can not. The provisions of the act are meant to be acted upon immediately after the publication of the act, except for part III that discusses the conditions in which a child may work. Part III can only come into effect as per a date appointed by the Central Government (which was decided as 26th of May, 1993). What is Child Labor? - The Child Labor Education Project. Child labor is work that harms children or keeps them from attending school. 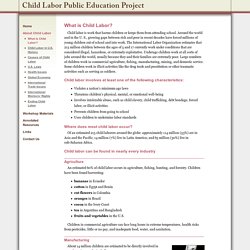 Around the world and in the U. S., growing gaps between rich and poor in recent decades have forced millions of young children out of school and into work. The International Labor Organization estimates that 215 million children between the ages of 5 and 17 currently work under conditions that are considered illegal, hazardous, or extremely exploitative. Introduction. Introduction Photo: Tom Pietrasik/UNDP India In recent years, India has enjoyed consistently high rates of growth and steady improvement in human development. 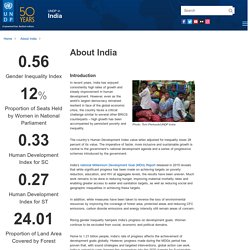 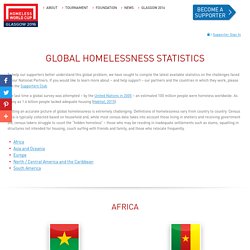 Numbers of services users have increased in Vienna and Salzburg over the past 15 years, but remained stable in Lower Austria (FEANTSA Country Fiche, 2014). BelgiumIn 2010, 3,185 individuals used homeless accommodation services in Brussels, more than 8,600 people stayed in hostels or supported housing in Flanders, and an additional 5,000 homeless people are estimated to live in Wallonia (FEANTSA, 2012). Bosnia and HerzegovinaThe government does not keep any official records, but the number of homeless people is believed to be rising (Save the Children). WalesMore than 15,000 people sought council help for being homeless in Wales during 2011 (BBC, 2012).

Between July to September 2014, 1,365 households applied to be considered homeless. Child Labor in India: Causes, Consequences & Lack of Schools? Recent numbers show that, in proportion, child labor in India is declining (a little less than 5% of children). 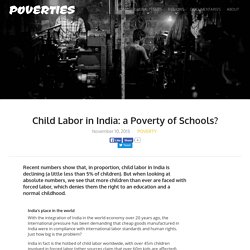 But when looking at absolute numbers, we see that more children than ever are faced with forced labor, which denies them the right to an education and a normal childhood. India’s place in the world With the integration of India in the world economy over 20 years ago, the international pressure has been demanding that cheap goods manufactured in India were in compliance with international labor standards and human rights. Awards and agreements - Fair Work Ombudsman. Minimum conditions at work can come from registered agreements, awards or legislation. When a business has a registered agreement in place and it covers the work that the employee does, then the minimum pay and conditions in the agreement will apply.

If there’s no registered agreement that applies and an award covers the business and the work the employee does, then the minimum pay and conditions in the award will apply. There are 122 industry and occupation awards that cover most people working in Australia, which means many employees who aren’t covered by an agreement will most likely be covered by an award. Sustainable development goals - United Nations. Economic history of Australia. The economic history of Australia traces the economic history of Australia since European invasion in 1788. Australia satellite plane 1788–1821[edit] Indian labour law. Indian labour law refers to laws regulating labour in India. Traditionally, Indian governments at federal and state level have sought to ensure a high degree of protection for workers, but in practice, legislative rights only cover a minority of workers.

India is a federal form of government and because labour is a subject in the concurrent list of the Indian Constitution, labour matters are in the jurisdiction of both central and state governments; both central and state governments have enacted laws on labour relations and employment issues. History[edit] Indian labour law is closely connected to the Indian independence movement, and the campaigns of passive resistance leading up to independence. IndiaSpend. Wp1555. World economy. Introduction. Ottawa charter india. Ottawa Charter for Health Promotion. The Ottawa Charter for Health Promotion is the name of an international agreement signed at the First International Conference on Health Promotion, organized by the World Health Organization (WHO) and held in Ottawa, Canada, in November 1986.[1] It launched a series of actions among international organizations, national governments and local communities to achieve the goal of "Health For All" by the year 2000 and beyond through better health promotion.

Context[edit] The fourteenth WHO World Health Assembly, held in 1977, had highlighted the importance of promoting health so that all the international citizens had an "economically productive" level of health by the year 2000. Further, a localised European taskforce developed a strategy for health promotion in the WHO European Region. Action areas of the Ottawa Charter[edit] Open Government Data (OGD) Platform India. India Unemployment Rate. Self Employed Women’s Association. Economic development in India. The economic development in India followed socialist-inspired policies for most of its independent history, including state-ownership of many sectors; India's per capita income increased at only around 1% annualised rate in the three decades after its independence.[1] Since the mid-1980s, India has slowly opened up its markets through economic liberalisation.

After more fundamental reforms since 1991 and their renewal in the 2000s, India has progressed towards a free market economy.[1] The economic growth has been driven by the expansion of services that have been growing consistently faster than other sectors. It is argued that the pattern of Indian development has been a specific one and that the country may be able to skip the intermediate industrialisation-led phase in the transformation of its economic structure. India adopts decent work country programme — OWSA: OneWorld South Asia - Latest news on sustainable development, features, opinions, interviews with NGO leaders and multimedia from India and South Asia.