BuzzGreeble 1.0b. Not so Good Vibrations on Bevel. Resources. In this section you will find a set of resources that I use regularly in my work. 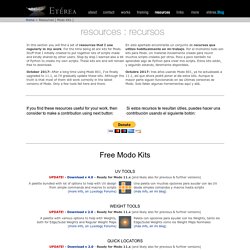 For the time being all are kits for Modo. Stuff that I initially created to put together lots of scripts made and kindly shared by other users. Step by step I learned also a bit of Python to create my own scripts. These kits are and will remain free to download. October 2017: After a long time using Modo 801, I've finally upgraded to 11.1, so I'll gradually update these kits. En este apartado encontrarás un conjunto de recursos que utilizo habitualmente en mi trabajo. Octubre 2017: tras años usando Modo 801, ya he actualizado a 11.1, así que ahora podré poner al día estos kits. ETEREA Super Aligners Icons 1.4. Update December 23, 2013 • Version 1.4 — Icons are defined using the new 'Icons Grid' structure introduced with Modo 701. 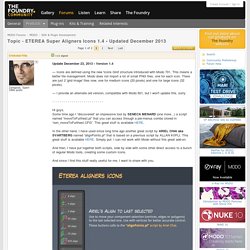 This means a better file management: Modo does not import a lot of small PNG files, one for each icon. There are just 2 'grid image' files now, one for medium icons (20 pixels) and one for large icons (32 pixels). — I provide an alternate old version, compatible with Modo 601, but I won't update this, sorry. Hi guys,Some time ago I “discovered” an impressive tool by SENECA MENARD (one more...) a script named “moveToFurthest.pl” that you can access through a pie-menus combo stored in “sen_moveToFurthest.CFG”. In the other hand, I have used since long time ago another great script by ARIEL CHAI aka SVARTBERG named “alignPoints.pl” that is based on a previous script by ALLAN KIIPLI. And then, I have put together both scripts, side by side with some other direct access to a bunch of regular Modo tools, creating some custom icons. 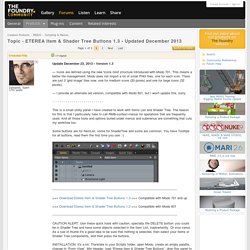 This means a better file management: Modo does not import a lot of small PNG files, one for each icon. There are just 2 'grid image' files now, one for medium icons (20 pixels) and one for large icons (32 pixels). — I provide an alternate old version, compatible with Modo 601, but I won't update this, sorry. This is a small utility panel I have created to work with Items List and Shader Tree. Some buttons are for ItemList, some for ShaderTree and some are common. ETEREA Falloffs Pie 1.4. ETEREA Swiss Knife 2.0 - Updated January 26, 2015. Update January 26, 2015 • Small Fix — I have included the last version of a script by Gianni Soldati aka Jeegrobot (“shapes_joiner.py”). 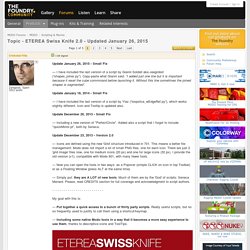 Copy-paste what Gianni said: “I added just one line but it is important because it reset the cube commmand before launching it. Without this line sometimes the joined shapes is segmented”. Update January 18, 2014 • Small Fix. ETEREA Snapping Bar 2.0. Update May 3, 2014 • Version 2.0 — A new design for MODO 801, since the snapping system has been completely rethought. 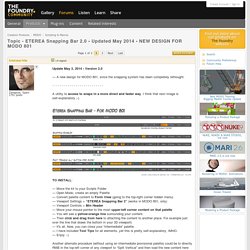 A utility to access to snaps in a more direct and faster way. I think that next image is self-explanatory ;-) — Move the kit to your Scripts Folder— Open Modo, create an empty Palette— Convert palette content to Form View (going to the top-right corner hidden menu)— Viewport Settings > “ETEREA Snapping Bar 2” (works in MODO 801, only)— Viewport Controls > Min Header— Move your mouse pointer to the most upper-left corner content on that palette— You will see a yellow-orange line surrounding your content.— Then click and drag from here to attaching the content to another place.

For example just over the line that draws the bottom in your 3D viewport)— It's all. >>> DOWNLOAD ETEREA SNAPPING BAR version 2 (FOR MODO 801) <<< And here is also an old Version 1 for MODO 701 (with different design and features, since Snapping has changed completely in 801) ETEREA Weight Tools 1.6. Update June 12, 2014 • Version 1.6 — This is a “maintenance” update just to include a new version of “Apptastic_MirrorWeights” tools, created by Clef. 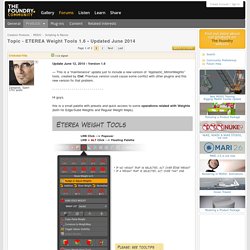 Previous version could cause some conflict with other plugins and this new version fix that problem. Hi guys, this is a small palette with presets and quick access to some operations related with Weights (both for Edge/Subd Weights and Regular Weight Maps). Third part scripts included on this package: Updated January 14, 2014. 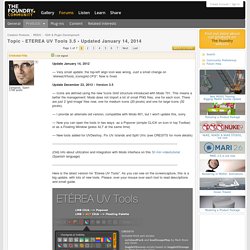 Just a small change on “etereaUVtools_iconsgrid.CFG”. Now is fixed. Update December 23, 2013 • Version 3.5 — Icons are defined using the new 'Icons Grid' structure introduced with Modo 701. . — I provide an alternate old version, compatible with Modo 601, but I won't update this, sorry. — Now you can open the tools in two ways: as a Popover (simple CLICK on icon in top Toolbar) or as a Floating Window (press ALT at the same time) — New tools added for UVDestroy, Fix UV Islands and Split UVs (see CREDITS for more details) (Old) info about utilization and integration with Modo interface on this 50 min videotutorial (Spanish language)