Math. Does It Add Up? Math in the Digital Age. Infographics. Recipes & Treats. The Mathematics Shed - Mathematics Shed. The Mathematics of Spider-Man. Will It Hit the Hoop? Desmos Classroom Activities. Mathematical Mindset Teaching Resources - YouCubed. YouCubed. 21 GIFs That Explain Mathematical Concepts. “Let's face it; by and large math is not easy, but that's what makes it so rewarding when you conquer a problem, and reach new heights of understanding.” 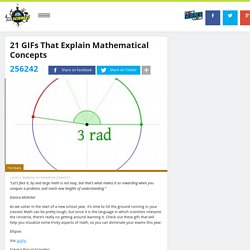 Danica McKellar As we usher in the start of a new school year, it’s time to hit the ground running in your classes! Math can be pretty tough, but since it is the language in which scientists interpret the Universe, there’s really no getting around learning it. A Maths Dictionary for Kids 2015 Full Site by Jenny Eather. CLIL: Teaching Math to Language Learners. Teaching Math & Science to Language Learners.

Maths Everywhere. Exploring Geometry by Coding With @gosphero & @tickleapp. In this article I would like to dissect the Math curriculum here in Ontario and focus on the process of mathematics. 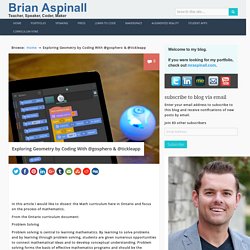 From the Ontario curriculum document: Problem Solving Problem solving is central to learning mathematics. By learning to solve problems and by learning through problem solving, students are given numerous opportunities to connect mathematical ideas and to develop conceptual understanding. Problem solving forms the basis of effective mathematics programs and should be the mainstay of mathematical instruction. Computational Strategies: They may need to apply the written procedures (or algorithms) for addition, subtraction, multiplication, or division or use technology for computation. The Teacher Who Believes Math Equals Love : NPR Ed. What makes a great teacher great? 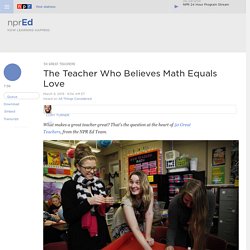 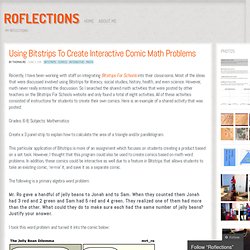 Most of the ideas that were discussed involved using Bitstrips for literacy, social studies, history, health, and even science. However, math never really entered the discussion. So I searched the shared math activities that were posted by other teachers on the Bitstrips For Schools website and only found a total of eight activities. All of these activities consisted of instructions for students to create their own comics. Here is an example of a shared activity that was posted: Grades: 6-8, Subjects: Mathematics Create a 3 panel strip to explain how to calculate the area of a triangle and/or parallelogram.

This particular application of Bitstrips is more of an assignment which focuses on students creating a product based on a set task. The following is a primary algebra word problem: Mr. Hplengr.engr.wisc.edu/Math_Schoenfeld.pdf. 5 Best Apps for Math and Counting. As a follow up to my post about writing apps (which you can click here to see) I thought I’d share some of the math and counting apps we’ve discovered. Again, it’s been challenging to find the few jewels among the plain old rocks. I really hadn’t realized how many apps were out there, nor how terrible some of them could be! The ones I list below (in no particular order) are the ones that I like because of their educational value, and that kids like for their entertainment value.

Each of these apps (except for Count Sort Match) offers a free “lite” version and a full price version. Click on the title or the picture to see the app in the app store. Count Sort Match This app showed up on Free App Friday last week. ) My students don’t find the “Sort” game particularly compelling, but they do like the “Match” game. 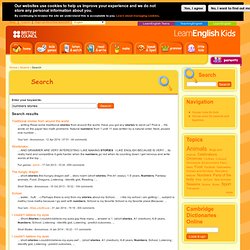 Have you got any stories to send us? Post a ... He wrote on the paper two math problems: Natural numbers from 1 until 11 was written by a natural order. Next, plused one number ... Maths - Section 3. Try Wikispaces Classroom now. 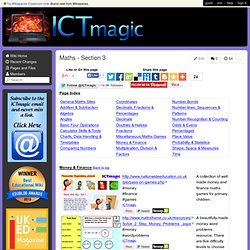 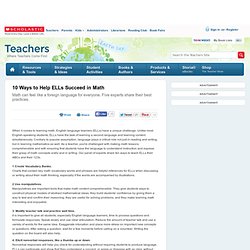 Unlike most English-speaking students, ELLs have the task of learning a second language and learning content simultaneously. Contrary to popular assumption, language plays a critical role not just in reading and writing, but in learning mathematics as well. As a teacher, you're challenged with making math lessons comprehensible and with ensuring that students have the language to understand instruction and express their grasp of math concepts orally and in writing. Our panel of experts share ten ways to teach ELLs their ABCs and their 123s. Illustrated Mathematics Dictionary. Web 2.0 scientific calculator. Concept Lessons - Real World Math. Educational Videos and Games for Kids about Science, Math, Social Studies and English. 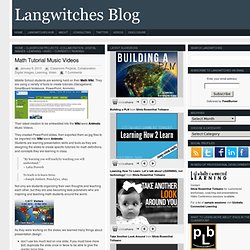 They are using a variety of tools to create tutorials (Garageband, SmartBoard Notebook, PowerPoint, Animoto). Their latest creation to be embedded into the Wiki were Animoto Music Videos. They created PowerPoint slides, then exported them as jpg files to be imported into Wiki were Animoto Students are learning presentation skills and tools as they are designing the slides to create specific tutorials for math definitions and concepts they are learning in class. GeoGebraTube. Using iPads During Math Stations.

I am continually trying to think of ways to use the iPads in a producing or student creation way, rather than a "lets play a game" kind of way. 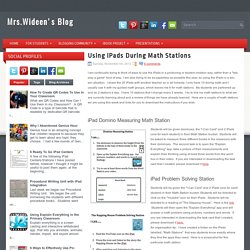 I am also trying to be as paperless as possible this year, so using the iPads is a win, win situation. I share the 20 iPads with another teacher so in all honesty, I only have 10 during math and I usually use 4 with my guided math groups, which leaves me 6 for math stations. My students are partnered up and do 2 stations a day. I have 10 stations that I change every 2 weeks. Math-Kitecture - Using Architecture to Do Math...Draft a Floor Plan with Software. Concept Lessons - Real World Math. Real World Math - Home. Connecting to Math in Real Life. By Wendy Petti Who needs math games when a world of meaningful real-life fun is beckoning? 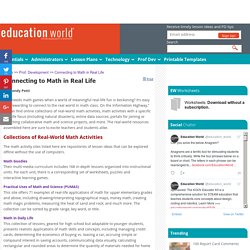 It's easy and rewarding to connect to the real world in math class. Use Creative Math Sites to Support Struggling Students - San Jose ESL. Math language can cause problems for many English language learners. Math word problems are especially difficult because the language around the word problem can often times be a challenge. As a very basic example, look at the many synonyms for "DECREASE": subtract, take away from, lowered by, reduce, minus, etc. Then there are the NON-MATH words in the problems. Look at this basic math problem for elementary school: Five boys and three girls went on a field trip. First problem--the problem starts off with BOYS and GIRLS and then combines the two to make CHILDREN.

Bus Math Problem. Fun Kids Online Math Games. "Sheppard offers everything from early math to pre-algebra. The lessons include interactive activities to practice concepts. Students can shoot fruit, pop balloons, and even play math man (the math version of pac man!). Fractions, place value, money, and basic operations are some of the areas that are covered. Check it out at " --Shannon Jakeman , sjakeman.blogspot.com "Online math games, like the ones that you'll find for free at Sheppard Software, provide a valuable opportunity for children to learn a great deal while they're having fun. Math nerds. 5 Ways to Build Math into Your Child's Day. By Laura Bilodeau Overdeck Laura Bilodeau Overdeck and her husband have been doing nightly math problems with their kids for years. Laura developed Bedtime Math to share with other families some fun math riddles and other ways to incorporate math into daily routines.

Math is everywhere. That’s great news for parents, because we can talk with our kids about math in fun, natural ways. 8 Videos That Prove Math Is Awesome. Believe it or not, math is really an art. While the subject can seem far from it when you’re caught in the doldrums of class, there’s a lot about math that’s just as creative as a Jackson Pollock and elegant as a rendition of Swan Lake. But some of us still run from those dreaded numbers, swearing up and down that it’s too complex, too rigid and just plain not fun. Still unconvinced? Check out these eight videos that explore the beauty of math, both in its simplicity and its complexity. 10 Outstanding Android Math Apps. Manic Math Madness. Making Math Meaningful Again. After writing the post this morning about math and writing, I essentially told myself I would forget about the time constraints, the curriculum map or the tests and just teach it in a way that makes sense. I combined three standards on linear equations, graphing, tables and problem-solving.

Math in the News: 2/25/13. n this issue of Math in the News we look at statistics related to Russian meteor that recently crash-landed. ELL - Independent vs. Dependent Variables. Teaching Math Rocks! We provide teachers and students with mathematics relevant to our world today … StoryMath - The Perfect Arrangement. Because every student counts. Videos about Numbers and Stuff. DragonBox - The multi-platform Math Game. Math Trail. Ihmanzoni.wikispaces.com/file/view/CLIL+Maths+and+Science+-+Latina+4+February+2012+-+Seminar+plan.pdf. CLIL Maths: Basic numeracy. CLIL Maths: Basic numeracy Submitted by Chris Baldwin on 11 June, 2010 - 11:26 This activity for young primary pupils is designed to work on basic numeracy skills whilst communicating in English.

Aims Content basic addition and subtraction Language Lexis – animals and numbersGrammar – 'have got' in questions and positive sentencesSkills – all four skills are developed in this activity Preparation Get a set of toy animals with several of each animal.Make one copy of the worksheet for each pupil.You may need to review spelling of number words before this lesson. Procedure Show pupils the animals one at a time and ask what animal it is in English.Put several animals together and ask pupils how many animals there are.Make groups of animals (e.g. three pigs and four cows) and ask how many of each there are and how many animals there are in total.

ExtensionPupils can now go on to write their own questions and ask their classmates orally. TEDxNYED - Dan Meyer - 03/06/10.