What are psychological disorders? How do Singaporeans view it? Where to seek help?

The latest edition of the American Psychiatric Association's diagnostic manual, the DSM-5, defines a mental disorder as:
"...a syndrome characterized by a clinically significant disturbance in an individual's cognitive, emotion regulation, or behavior that reflects a dysfunction in the psychological, biological, or developmental process underlying mental functioning. Mental disorders are usually associated with significant distress in social, occupational, or other important activities."

With the increasing number of people being diagnosed with mental conditions such as clinical depression, bipolar disorder, alcohol dependence, etc., it is raising cause for concern. Singapore among many other developed countries is seeing a rise in the diagnosis of mental disorders among its people. Social support is one of the many important factors which can help sufferers towards recovery and because many shun those with mental disorders, simply because they do not know how to deal or even live with those with mental disorders in their lives, the end result is avoidance.

Most who are diagnosed with a mental disorder or condition have to live with being labeled as a "crazy one" for the rest of their lives. That is also why most do not seek help until it is too late. As in the video clip "A social experiment on Mental Health Stigma", the interviewees were not aware that their interviewers or moderators were diagnosed with clinical depression, the fact that they seem so "normal" like you and I, took many off-guard. People always fear what they do not know, like the dark, for one. It is only fair that those who have been diagnosed with mental conditions be given a chance to live a normal life. After all, they are humans like us too. Many a time, it is not the mental condition that kills, but rather the discrimination and stigma that deters one from seeking help which puts the final nail in the coffin. So Stop the Stigma!

Singapore one of the most unhappiest countries in the world4.

From the poll, it can be seen that Singapore is amongst one of the unhappiest countries in the world, contradictory to it being one of the most prosperous in terms of urban, technological, infrastructural amongst developed countries. – hbtan007 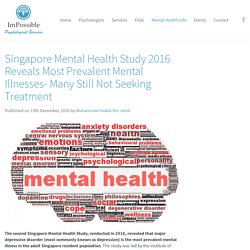 The study was led by the Institute of Mental Health (IMH), and interviewed 6,126 adult Singaporeans or permanent residents. The proportion of respondents who experienced depression in their lifetime increased to 6.3%, compared to 5.8% in the first Singapore Mental Health Study in 2010. Alcohol abuse disorders was next most common mental health issue (4.1%), followed by obsessive compulsive disorder (OCD; 3.6%). These findings indicate that major depressive disorder, alcohol abuse and obsessive compulsive disorder continued to be the top three mental health issues experienced in Singapore.

6 common mental disorders affecting Singaporeans today and where you can go to get help, Business Insider - Business Insider Singapore. Pexels There’s been an increase in the number of Singapore adults who have suffered from a mental disorder in their lifetimes, the Institute of Mental Health (IMH) said recently. According to a 2016 study, one in seven people in Singapore have experienced specific mood, anxiety, or alcohol use disorders in their lifetime, up from roughly one in eight six years prior.

Read also: 1 in 7 people in Singapore have experienced a mental disorder – and some millennials are more susceptible to mood and alcohol-related ones Part of the study’s findings is the alarming revelation that most of these sufferers (more than three-quarters) have never sought any professional help for their illnesses. Where to get help. Many still steer clear of people with mental illness: Poll, Singapore News. Even as more people are seeking outpatient treatment at the Institute of Mental Health (IMH), more than five in 10 respondents in a recent survey indicated they are unwilling to live with, live nearby or work with a person with a mental health condition. The survey, which is the first of its kind by the National Council of Social Service (NCSS), found that most people agree that more needs to be done to reduce societal stigma, yet they are also reluctant to accept them on an individual level. 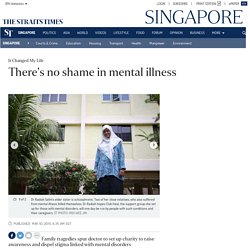 The old mental hospital was sited off Yio Chu Kang Road and, as a child, she went there often to visit a patient - her schizophrenic elder sister. "The corridors were dark and dingy and you would see all these 'gila' people there," she says, using the Malay word for mad. "Some of my sister's attacks were so bad that they had to tie her down and give her electro convulsive therapy. " Her sister is not the only family member living with a mental illness. Her paternal grandmother, more than half a dozen relatives on her father's side, three of her second cousins, and a nephew lived or live with mental disorders too. Her nephew and a second cousin committed suicide and their deaths shook her.

The tragedies spurred her to set up Club Heal, a charity to raise awareness about mental illness and remove the derision, shame and stigma associated with it. Stop the Stigma. A Social Experiment on Mental Health Stigma.

Breaking the Stigma and Shame of Mental Illness. Depression Emergency Hotline and Other Health Helplines. V44N9p314. Reaching Out 2 - Personal Sharing by Caregivers and Patients. Fung Bo Bo Talks About Depression.