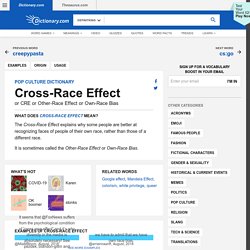 The phenomenon has been used to identify and explain one of the factors that may cause inaccuracies in eyewitness testimony. In the case of race, social scientists have found that witnesses often struggle to properly identify people of other races based on facial recognition, while they don’t have the same problems identifying someone of their own race. Hence, the reason this is also sometimes called Own-Race Bias or the Other-Race Effect. Debate has long raged over whether or not the Cross-Race Effect is motivated by racism; however, several studies have determined that a person’s racial attitudes neither help nor hinder them on cross-racial identification tests. The Science Behind ‘They All Look Alike to Me’ The outcry was immediate and ferocious when a white New York City police officer tackled James Blake, the retired biracial tennis star, while arresting him this month in a case of mistaken identity. 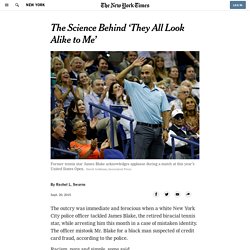 The officer mistook Mr. Blake for a black man suspected of credit card fraud, according to the police. Racism, pure and simple, some said. But was it? Scientists, pointing to decades of research, believe something else was at work.

Have you ever been guilty of the-other-race effect? - Myf Warhurst - ABC Radio. The other-race effect in 3-year-old German and Cameroonian children. Introduction The other-race-effect (ORE) is a robust finding in adults’ face recognition, with more accurate discrimination and recognition of faces of one’s own race compared to faces from a different race (e.g., Meissner and Brigham, 2001). 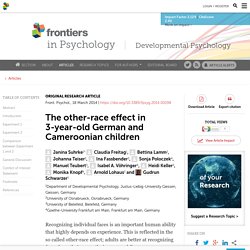 It is impressive that the ORE emerges very early in life between 3 and 9 months of age (Kelly et al., 2007). This holds true for faces of different races and for infants from different cultures suggesting the universality of the phenomenon (Kelly et al., 2009). From the infant results the question arises whether such a general phenomenon of face recognition as the ORE continues into early childhood. On the one hand a continuous transition seems plausible as the ORE is found in older children and adults, but on the other hand, studies on the ORE beyond infancy are rare and moreover provided inconsistent results between the ages of 3 to 8 years. A similar pattern of results was found by Goodman et al. (2007). Experiment 1 Methods Participants. 'They All Look Alike': The Other-Race Effect.

If somebody says, "Well, they all look alike," one might assume that person to be a closet bigot. 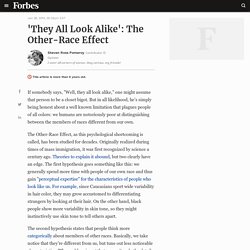 But in all likelihood, he's simply being honest about a well known limitation that plagues people of all colors: we humans are notoriously poor at distinguishing between the members of races different from our own. The Other-Race Effect, as this psychological shortcoming is called, has been studied for decades. Originally realized during times of mass immigration, it was first recognized by science a century ago. Theories to explain it abound, but two clearly have an edge. The first hypothesis goes something like this: we generally spend more time with people of our own race and thus gain "perceptual expertise" for the characteristics of people who look like us.

The second hypothesis states that people think more categorically about members of other races. Concrete evidence is often hard to come by in psychology, so it's unlikely that either theory will ever be "proven" conclusively. 'They all look the same': How our race perception is developed early. When a Sudanese-Australian fashion model was recently confused for another model of African heritage in a magazine feature, a debate about racism unfolded. 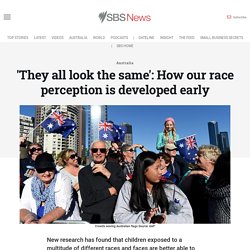 The model, Adut Akech, accused the magazine of disrespecting her race because it used a photo of another model of Ugandan background in a feature about her. But new research has found that an inability to recognise people of different races may not be entirely about racial prejudice.

OTHER ASPECTS OF RESEARCH

LEGAL (AFRICAN & INDIGENOUS CULTURES) SOCIAL (ASIAN CULTURES) Why do people of other races all look alike? I've seen The Departed twice, but I still don't understand it. 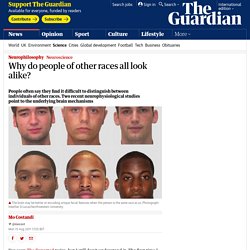 The first time I watched it, I was utterly confused, and the plot still didn't make much sense on the second viewing. I know exactly why this is – it's because I find it very hard to tell the difference between Leonardo DiCaprio and Matt Damon. I've been told that this might have something to do with the "other-race effect," which makes it difficult for us to identify people of other races or ethnic groups.

But I'm not so sure – I can easily distinguish Robert DeNiro from Jack Nicholson, or Humphrey Bogart from Cary Grant. Nevertheless, the other race effect is a well established phenomenon that we've known about for nearly a hundred years. But why does this happen? Participants wore an elastic electroencephalography (EEG) cap containing 59 electrodes, so that the electrical activity of their brains could be recorded throughout the experiment. A cross-race effect in metamemory: Predictions of face recognition are more accurate for members of our own race. Culture Shapes How We Look at Faces.