Focus on mental health of elite athletes a must. AIS Director of Athlete Wellbeing and Engagement Matti Clements says athletes are already screened across a range of metrics such as sleep, nutrition and injury and mental health should be treated no differently. 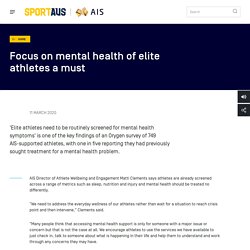 “We need to address the everyday wellness of our athletes rather than wait for a situation to reach crisis point and then intervene,” Clements said. “Many people think that accessing mental health support is only for someone with a major issue or concern but that is not the case at all. We encourage athletes to use the services we have available to just check in, talk to someone about what is happening in their life and help them to understand and work through any concerns they may have. “This is why the AIS Mental Health Referral Network offers a wide range of services, from basic mental wellness checks to comprehensive clinical treatment plans.

Men, Mental Health and Elite Sport: a Narrative Review. Injury One of the most recognised risk factors for psychological distress amongst male athletes has been sports injury [5]. 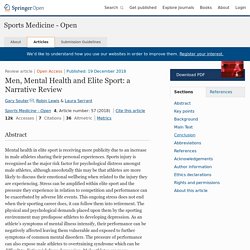 Major negative life events, including injury, may increase the risk of mental ill-health in elite athletes [6]. Injuries are particularly found to be associated with depression in athletes [7]. Symptoms of common mental disorders amongst both current and former athletes, including depression and anxiety, were found to be related to several determinants, particularly injury [8], and former athletes who had suffered from several severe injuries or surgeries were 2–7 times more likely to report symptoms of common mental disorders than former athletes without injury or surgery. Mental Health In Elite Athletes: Increased Awareness Requires An Early Intervention Framework to Respond to Athlete Needs. 1.Reardon CL, Hainline B, Aron CM, Baron D, Baum AL, Bindra A, et al. 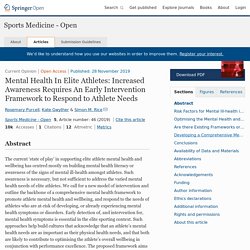 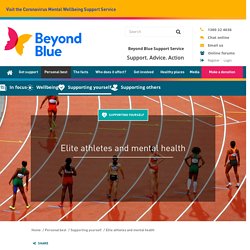 Learning to be in tune with how you are feeling, and knowing when to seek support, is vital. Here, Dr Jamie Moshinsky looks at some steps that elite athletes can take to look after their mental wellbeing. Seek social support As well as maintaining friendships with those within the sporting community, be sure to spend time with people outside of it. Why it matters that more athletes are talking about their mental health.

The great basketball writer Jackie MacMullan recently stood at the front of a hotel ballroom in Tampa taking questions after collecting a career achievement award from the Association for Women in Sports Media. 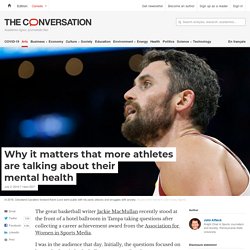 I was in the audience that day. Initially, the questions focused on her early days in basketball as a reporter. But then someone brought up a series of stories MacMullan had written for ESPN last summer on NBA players’ mental health problems. MacMullan called it “probably the most important thing I’ve ever done,” and a nearly 10-minute discussion followed. The package featured All-Stars Kevin Love and Paul Pierce, among others, discussing their struggles with depression and anxiety.

It’s not just the NBA where athletes’ struggles with mental health are under scrutiny, either. Wanting to explore why it’s happening now and why it matters, I talked to some experts in the field. Australian Sports Stars Speak Out On Mental Health. A growing list of elite athletes are speaking out about their mental health challenges and in doing so breaking stigma in the community. 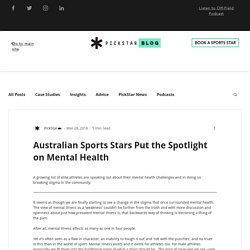 It seems as though we are finally starting to see a change in the stigma that once surrounded mental health. The view of mental illness as a 'weakness' couldn’t be further from the truth and with more discussion and openness about just how prevalent mental illness is, that backwards way of thinking is becoming a thing of the past.​ Michael Phelps says he has been through some of the 'darkest moments of his life' during quarantine. Olympic swimmer Michael Phelps is opening up about his mental health struggles, admitting that the pandemic and quarantine have been the 'most difficult time' in his life. 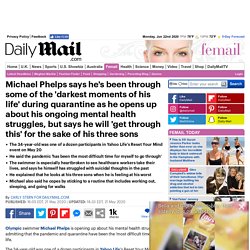 The 34-year-old was one of a dozen participants in Yahoo Life's Reset Your Mind event on May 20, and in a video he recorded at home, he got candid about times in his past when he's broken down and even felt suicidal. But the pandemic has presented a new set of struggles, and he's gone through some of 'the darkest moments' ever — but he also shared how he is coping and getting through the tough times. Candid: Olympics swimmer Michael Phelps is opening up about his mental health struggles, admitting that the pandemic and quarantine have been the 'most difficult time' in his life 'I can say this has been the most difficult time for myself to go through,' the athlete admitted 'I’ve gone through some of, probably the darkest moments, like continuous darkest moments that I've gone through. 'Suicide rates have to stop climbing. 8 Male Athletes Become Lifeline Mental Health Ambassadors - Australian Men's Health Forum.

Eight male athletes from seven sports have been selected to raise awareness of mental health issues. 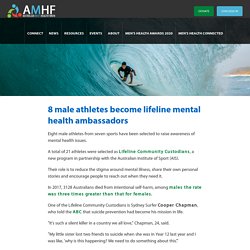 A total of 21 athletes were selected as Lifeline Community Custodians, a new program in partnership with the Australian Institute of Sport (AIS). Their role is to reduce the stigma around mental illness, share their own personal stories and encourage people to reach out when they need it. In 2017, 3128 Australians died from intentional self-harm, among males the rate was three times greater than that for females. One of the Lifeline Community Custodians is Sydney Surfer Cooper Chapman, who told the ABC that suicide prevention had become his mission in life. "It's such a silent killer in a country we all love," Chapman, 24, said. "My little sister lost two friends to suicide when she was in Year 12 last year and I was like, 'why is this happening?

"I also lost an uncle to suicide when I was about eight," Chapman said. How to Identify Anxiety and Depression in Sport. Depression and anxiety show themselves differently in sports than they do in everyday life. 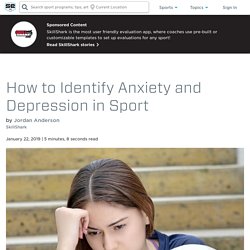 This makes it a little more challenging to identify. Max is a 13-year-old baseball player who is gearing up for his tryouts for the local little league team. Although he played for this same team last season, he has noticed that he is becoming more and more stressed as the tryouts draw near. Although day one goes okay, he complains that he is sick to his stomach before his second session. He has trouble remembering the drills from time to time, which is unlike him.

You’re starting to wonder – what is going on? Mental health, as a whole, is being discussed in the media more and more within the last few years. Despite this, athletes of all ages still experience challenges with their mental health. Despite these facts, athletes still struggle with their mental health as much as the rest of the population. What do I look out for? Anxiety Somatic Think of these more as physical symptoms. Worry.