Avoiding “The Other Race Effect!” Humans are more likely to misidentify faces from other races (ethnic backgrounds) than their own. 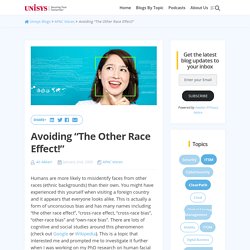 You might have experienced this yourself when visiting a foreign country and it appears that everyone looks alike. This is actually a form of unconscious bias and has many names including “the other race effect”, “cross-race effect, “cross-race bias”, “other-race bias” and “own-race bias”. There are lots of cognitive and social studies around this phenomenon (check out Google or Wikipedia). This is a topic that interested me and prompted me to investigate it further when I was working on my PhD research on human facial analysis algorithms in Japan. Usually racial biases are about wider topics of racism and favouritism that relate to the higher levels of our cognitive process and more complex factors involved. When I first moved to Japan, I often misrecognised Japanese faces, but I eventually got a lot better. AI algorithms are not very different from us on this aspect. EJ1066278. The other-race effect: people keep mixing me up with other South Asians - Hack - triple j. Have you ever been mixed up for someone else who is the same race as you? 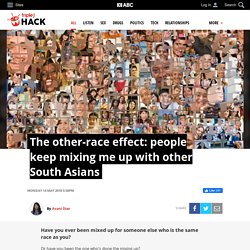 Or have you been the one who's done the mixing up? Turns out it's actually a psychological phenomenon called the "other-race effect". "The other-race effect within psychology refers to the bias that people have when trying to identify a person who is not from the same race as they are," forensic psychologist, Dr Celine Van Golde told Hack. "If you're not exposed to faces with different kinds of features, you really struggle with telling them apart and it's the old school saying of 'they all look alike' and unfortunately that can actually be the case. " The other race effect can lead to some awkward situations "It happened in a workplace recently and that's the one I remember most vividly... it's interesting because I don't think we even look that much alike," says Australian comedian, Jen Wong.

Jen says she was mixed up with an Asian colleague at work. 774 ABC Melbourne: Karen Brookes This has happened to me so many times. Coronavirus has sparked racist attacks on Asians in Australia — including me. Updated 1 Feb 2020, 2:40pmSat 1 Feb 2020, 2:40pm I was standing in a supermarket aisle and moving my shopping trolley to make room for a middle-aged woman to pass when I overheard it: "Asians … stay home …stop spreading the virus. 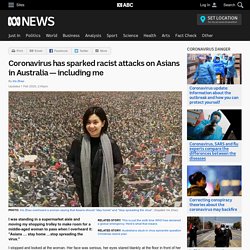 " I stopped and looked at the woman. Her face was serious, her eyes stared blankly at the floor in front of her as if she was just thinking aloud. I didn't confront her. Her voice lowered when she knew I was watching her, but the muttering continued as she walked away. CAN YOU TELL ASIANS APART ?!?! - YORK UNIVERSITY. □□‍♂️ do all asians look the same? As The Coronavirus Spreads, So Does Racism — Both Against And Within Asian Communities. Mid this week, I got off the bus at my usual bus stop at the end of the day. 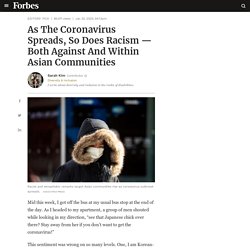 As I headed to my apartment, a group of men shouted while looking in my direction, “see that Japanese chick over there? Stay away from her if you don’t want to get the coronavirus!” This sentiment was wrong on so many levels. One, I am Korean-American. Two, the coronavirus originated in Wuhan, China — I am a Brooklyn resident who hasn’t traveled overseas in recent months. On December 31, Chinese officials reported the outbreak of the mysterious coronavirus in the city of Wuhan. The virus has now turned up in over a dozen other countries, including France, Japan, South Korean, Australia and the United States. While public health officials look to contain the crisis, racism and xenophobia have widely spread across the world both against and within Asian communities.

The U.S. Same as back then, the fear of the outbreak has fueled xenophobic remarks and behaviors in the weeks since the first case of coronavirus.