Lesley McSpadden, left, with her husband, Louis Head, after her 18-year-old son, Michael Brown, was shot and killed by police in Ferguson, Mo., on Saturday, Aug. 9, 2014. 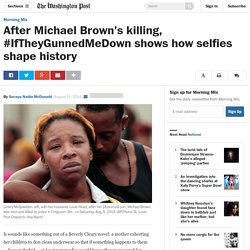 (AP Photo/St. Louis Post-Dispatch, Huy Mach) It sounds like something out of a Beverly Cleary novel: a mother exhorting her children to don clean underwear so that if something happens to them — heaven forbid — at least paramedics would know they were cared for. It also hearkens back to a much simpler time. Today, those judging aren’t medical staff, but national media. Now the concern is how media will portray a dead child’s life after he’s slain by police officers. #IfTheyGunnedMeDown which photo would they use? #IfTheyGunnedMeDown which picture would they use? Which picture would the media use #iftheygunnedmedown the left or the right? Warning: Viewers may find photos offensive. Ultimately, it was a selfie of Martin in a hoodie that became the image associated with his death. H/t Raw Story. How Racist Propaganda Was Used To Subjugate Black People. Wikipedia defines “propaganda” as “a form of communication that is aimed towards influencing the attitude of a community toward some cause or position by presenting only one side of an argument. 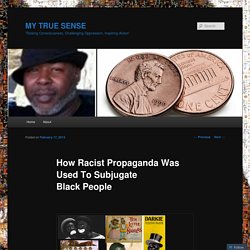 Propaganda is usually repeated and dispersed over a wide variety of media in order to create the chosen result in audience attitudes.” It amazes me how much we tend to underestimate the role white supremacist propaganda plays in creating, justifying and maintaining our oppression. Certainly this phenomenon impacts several groups of people, but my focus in this article is on Black people. What purposes do white supremacy and racism serve?

All you need do is view Marlon Riggs’ pioneering documentary “Ethnic Notions” to appreciate white America’s long and systemic effort to thoroughly degrade and denigrate the Black image and psyche. Racism serves multiple purposes. Why and how is propaganda used against Black people? Left to their own devices, humans act in their own best interests. Ethnic Notions. Blackface Montage from Spike Lee's Bamboozled. Blackface! - The History of Racist Blackface Stereotypes. 3 Black Adoptees Speak About Growing Up With White Parents. The ad campaign for Kevin Costner’s new film Black or White definitely supports that idea, pushing the hashtag #LoveKnowsNoColor while promoting the transracial custody drama. 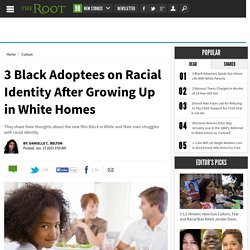 Black or White pits a child’s white maternal grandfather (Costner) against her black paternal grandmother (played by Octavia Spencer) in a legal battle for custody. Think Losing Isaiah meets The Blind Side, dealing with the matter of white parents raising black or biracial children. In both those films, as in Black or White, the main focus seems to be on the adults in the room, fighting over the future and well-being of a child of color. But what of the children put in this situation, raised by white families? The Root talked to three transracial adoptees, all adopted by white families in the 1970s, about their experiences and views on transracial adoption, as well as Costner’s new film.

Author and performer Chad Goller-Sojourner used to be afraid of black people, despite being a black person himself. Negative Images 'Brainwash' African Americans. The Images Of Black Women In Media Still 'Only Scratch The Surface,' Essence Study Finds. Character's like Kerry Washington's Olivia Pope on "Scandal", and Nicole Beharie's Lt. 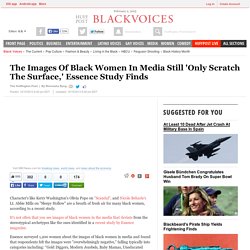 Abbie Mills on "Sleepy Hollow" are a breath of fresh air for many black women, according to a recent study. It's not often that you see images of black women in the media that deviate from the stereotypical archetypes like the ones identified in a recent study by Essence magazine. Essence surveyed 1,200 women about the images of black women in media and found that respondents felt the images were "overwhelmingly negative," falling typically into categories including: “Gold Diggers, Modern Jezebels, Baby Mamas, Uneducated Sisters, Ratchet Women, Angry Black Women, Mean Black Girls, Unhealthy Black Women, and Black Barbies.”